HOME / WORLD / Oxfam: Saudis Carry Out Equivalent of One Attack Every Ten Days on Yemen’s Medical and Water Facilities 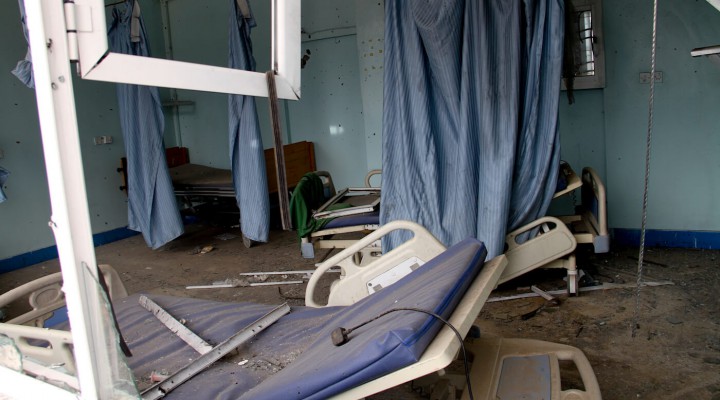 According to a new Oxfam analysis, the Saudi Colation has carried out the equivalent of “one air raid every ten days during the conflict affecting hospitals, clinics, ambulances, water drills, tanks and trucks,” since it began the war in 2015.

MPN– Yemen is already living through what the United Nations calls “the world’s worst humanitarian crisis.” Yet despite twin epidemics of cholera and COVID-19 raging through the embattled nation, the Saudi-led coalition continues to target medical and water infrastructure, having done so over 200 times since the conflict began, a new report from Oxfam claims. That is equivalent to one air raid every ten days during the conflict, as hospitals, health clinics, water drills, trucks and sewage systems have been attacked and destroyed. There have been over 21,000 coalition air raids on the country since 2015, according to the Yemen Data Project. However, these are highly concentrated in western areas controlled by the Houthi rebels, with only ten recorded in the eastern half of the country.

The effect of the continuous onslaught has been devastating, sparking a crisis of epic proportions. The United Nations estimates that 14 million people — over half the country’s population — are at risk of famine, and 20.5 million need help accessing drinkable water. “Vital infrastructure like hospitals, clinics, water tanks, and wells have consistently been in the crosshairs throughout this conflict. Their damage and destruction make Yemen even more vulnerable to diseases like COVID and cholera,” said Muhsin Siddiquey, Oxfam’s Yemen Country Director. “Lives aren’t just lost when the bombs fall but also during the weeks, months or years it takes for hospitals and wells to be rebuilt.”

The country is experiencing acute and protracted health crises, even if official numbers do not show it. Although statistics suggest that only 537 Yemenis have died from coronavirus and cholera cases are down from last year, aid agencies have warned this is actually a bad sign. “Rather than show that Yemen has cholera and COVID under control, the low official numbers demonstrate the exact opposite. A lack of working health facilities and people too scared to get treatment mean that the numbers suffering from these diseases are being vastly under recorded,” Siddiquey said last month. The ongoing monsoon season, which has brought floods with it, has made matters worse. The World Food Program has warned of a potential “famine of biblical proportions” as a consequence.

The United States government has been a key supporter of Saudi actions in Yemen, arming, helping and training its military, while defending it from censure internationally. According to the Stockholm International Peace Research Institute’s figures, Saudi Arabia is by far Washington’s best customer in terms of arms sales, spending over three times as much on American weaponry as any other country. Other junior members of the Saudi coalition, such as Qatar and Kuwait, also feature prominently on the list of top buyers. Throughout the Saudi campaign, which has been condemned by the United Nations, arms sales have increased. Last year President Trump personally vetoed a bill to end U.S. support for the war. The United Kingdom is also a major partner of the Saudi military, it accounting for half of all British foreign arms sales.

Without mentioning them explicitly, Oxfam pointed the finger at the U.S. and U.K., the countries that have sold by far the most weapons to the absolute monarchy. “Arms exporting countries have profited from the sale of billions of dollars-worth of munitions to Saudi Arabia and its coalition partners throughout the course of more than five years of war in Yemen, despite knowing that some of these arms could be used in violation of international humanitarian law,” it wrote, Siddiquey noting that Yemen’s suffering is “being fuelled by arms sales.”

Despite the obvious human consequences of the sales, last week, a State Department report cleared Secretary of State Mike Pompeo of all wrongdoing in executing a multi-billion dollar arms sale between the U.S. and Saudi Arabia. “We did everything by the book,” Pompeo told reporters, also claiming that his weapons deal had somehow “prevented the loss of lives.”

The reality of the situation is that close to a quarter of a million people have died during the “civil war,” which began in 2015 after Houthi militias rebelled against the rule of Abdrabbuh Mansur Hadi. With a ruined medical and sanitation infrastructure, things are likely to get worse before they get better.

Feature photo | The al-Thawra Hospital in Taiz, Yemen is shown after it was damaged by shelling in 2015. Photo | International Committee of the Red Cross

0 thoughts on “Oxfam: Saudis Carry Out Equivalent of One Attack Every Ten Days on Yemen’s Medical and Water Facilities”