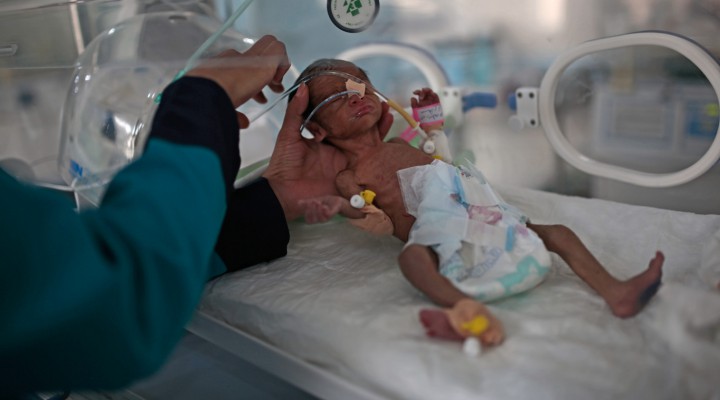 Secretary of State Pompeo successfully pressured the UN to significantly cut back aid to one of the world’s poorest countries, claiming it could fall into rebel hands.

MPN– Home to what the United Nations has described as “the world’s worst humanitarian crisis,” Yemen is on the brink of total disaster after five years of protracted war. Yet crucial international aid to the country has been cut this year to just 25 cents per person, per day, around half of what was given in 2019. That money translates to just 200 grams (less than half a pound) of beans, three eggs, or 200ml of cooking oil inside the country, where food prices are soaring.

The aid has been channeled primarily through the United Nations. But the organization warns that what they received is less than half of what is necessary to supply clean water, food, shelter, and medicine to the 24 million people (80 percent of the population) who need humanitarian assistance.

Much of the blame for the drop in aid can be placed at the door of the United States with Secretary of State Mike Pompeo publicly pressuring the U.N. to scale back humanitarian assistance to the country in an attempt to starve the rebels of aid. In March, Pompeo traveled to U.N. headquarters to meet with Secretary-General Antonio Guterres to make his case.

Oxfam’s Yemen Country Director, Muhsin Siddiquey, pleaded with the international community to do more to help the country. “While the economic fallout unleashed by the COVID-19 pandemic has affected every corner of the globe, in Yemen millions are on the brink of starvation. Yemenis cannot afford aid to be cut, people need more help to survive, not less,” he said.

Cashing in on a crisis

Furthermore, the countries that have contributed the most in aid — the United States, United Kingdom, Saudi Arabia, and the United Arab Emirates — are the very same ones directing the onslaught against Yemen, with Saudi and Emirati troops leading the fight, supported by British and American arms sales and political cover. Saudi Arabia, for example, is responsible for 49 percent of all weapons purchases, while it has committed to buying $350 billion worth of U.S. arms in the coming years. This economic power has allowed the four to play politics with international aid, directing to groups that allow them to advance their agenda instead of where it is needed most.

“Countries should stop cashing in on this appalling humanitarian crisis and instead put people’s lives above arms manufacturers’ profit,” Siddiquey said. “The Yemenis who’ve had to flee their homes, go without food and clean water, and endure outbreaks of disease need a nationwide ceasefire and inclusive peace talks to end this war so they can rebuild their lives.”

The World Bank has warned of a “famine of biblical proportions,” with over 20 million people also lacking access to clean water. Because of the lack of funds, the U.N. has had to reduce services at 300 health and food distribution centers across Yemen. These sites are already in short supply, as the Saudi-led coalition intentionally targets their Yemeni counterparts, attacking water or medical facilities once every ten days on average since the war began in 2014.

Two-thirds of all districts in the country are already pre-famine, the U.N. explains, and one-third face a convergence of multiple acute vulnerabilities. These include deadly outbreaks of cholera and COVID-19. Officially, the country has seen only 2,047 COVID-19 cases and cholera numbers have dropped from last year. But, as Oxfam warned, these low figures do not show that the country has the epidemics under control. Quite the opposite: it shows their embattled health systems have been completely overwhelmed and are unable to record the devastation wrought.

From Arab Spring to Abraham Accord

While the conflict has its origins in the 2011 Arab Spring, the war officially began three years later, when armed Shia Houthi rebels rose up against what they saw as a corrupt and undemocratic government led by Abdrabbuh Mansur Hadi. Hadi initially fled the country but was given strong support by Saudi Arabia, other Gulf monarchies, and Western powers, who accused Iran of arming and funding the Houthis. However, without many boots on the ground, they have been unable to dislodge the Houthis from their strongholds in the populous south and west of the country, preferring to bomb the country from above. While the official death toll of the war stands at over 100,000, most believe this is a serious underestimate.

Unfortunately, the war is unlikely to cool down in the foreseeable future. The recently signed Abraham Accord between Bahrain, the U.A.E., and Israel, for example, allows for the transfer of high-tech American and Israeli weaponry to the Gulf states, who will doubtless be keen to use it in Yemen.

“The U.A.E. is one of the central protagonists in the cataclysmic war of aggression against Yemen,” Greg Shupak of the University of Guelph, Ontario, told MintPress. “So there is a strong possibility that it will unleash these killing machines on the impoverished Yemeni population that it has already done so much to devastate…Likewise, increased intelligence sharing between Israel and the U.A.E. could entail Israel helping the U.A.E. having more, and possibly more advanced, information that it can use to maim and kill Yemenis.”

Despite promising to draw down its role in the conflict, Sudan is sending hundreds of more troops to the country via Saudi Arabia. A foreign ministry spokesperson also recently revealed that the country is in talks with Israel to normalize relations. Saudi Arabia has also recently begun building a military base in the Hawf nature reserve in eastern Yemen, a crucial oasis in the largely arid country. As always, there appears to be plenty of money for weapons, but not enough for crucial humanitarian aid.

Feature photo | A medic checks a malnourished newborn inside an incubator at Al-Sabeen hospital in Sanaa, June 27, 2020. Hani Mohammed | AP

0 thoughts on “Following US Pressure, Aid to Yemen Falls to Just 25 Cents Per Day”