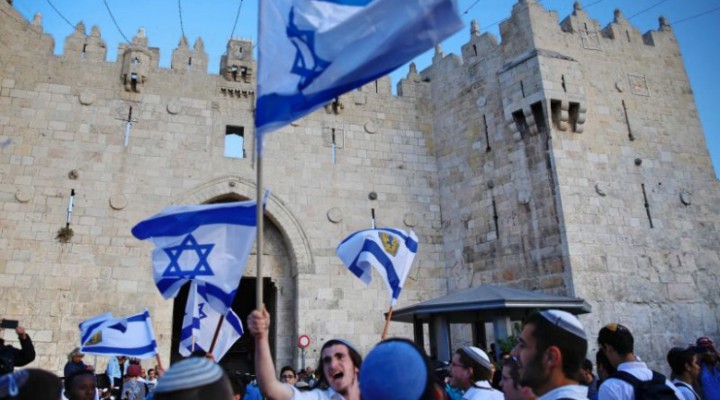 We must admit that the Israeli ‘Flag March’ in occupied Jerusalem achieved most if not all of its aims. It was left to the defenceless people of Jerusalem to try to counter the hordes of aggressive settlers and the thousands of heavily-armed troops accompanying them, while the resistance groups that vowed to respond to this provocative invasion with missiles, as they did last year, failed to fulfil their pledge.

The vast majority of Arabs and Muslims support resistance to the occupation, and no phrase frustrates and demoralizes them more than “retaliation at the appropriate time and place.” We heard it used repeatedly by Gaza Strip resistance group leaders and spokesmen to justify their failure to live up to their promises — reiterated strongly during the build-up to the Flag March — to retaliate for the settler onslaught. We were led to expect a blistering response to put an end to the arrogance of the settlers and their leaders, protect Jerusalem, and reaffirm its Arab identity.

It’s true that brutal violence was unleashed by Israeli troops against the Jerusalemites who protested against the march, resulting in 89 injuries and hundreds of arrests. But it’s also true that the occupier state’s prime minister, Naftali Bennet, emerged strengthened. His security minister Omer Bar-Lev was right to gloat that by going ahead with the march and defying threats Israel had reinforced its deterrent power. The new rules of engagement established by last year’s ‘Sword of Jerusalem’ battle were effectively annulled.

We still don’t know why Hamas and Islamic Jihad, specifically, did not make good on their threats to retaliate for the storming of Jerusalem as they did last year. All we got were brief remarks from Hamas leader Ismail Haniyeh describing the Israelis’ behaviour as “unforgivable” and promising “the response will be at the appropriate time and place.”

More light was shed by Hamas’ spokesman in Gaza, Taher al-Nounou, who revealed that “certain parties” had contacted the Hamas leadership “in order to contain the situation and avoid any further deterioration, as they put it.” This means, as we understand it, that these parties — especially Qatar where Haniyeh and other Hamas leaders are based, and Egypt which controls the Rafah border crossing — put pressure on Hamas not to retaliate at the behest of the US and/or Israel.

But why didn’t Nounou name these parties? And why didn’t Haniyeh tell these Arab go-betweens that instead of telling the Palestinians to keep quiet as Israel implements its plans for the spatial and temporal partition of al-Aqsa, they should tell the Israelis and Americans to halt the provocative march? Why is it we who must always back down?

Anthony Blinken asked Bennet to stop the march, and an Israeli court ruled against it because of the possible security fallout. But Bennet resisted these pressures in order to shore up his political base, the reputation of his security agencies, and the credibility of his leadership. Why didn’t the Gaza resistance leaders do the exact same thing, as they did last year when their missile barrages paralysed Israel and sent its prime minister scurrying to the US to seek Egyptian intercession to secure a cease-fire?

A key question is what did they obtain in return for their ‘responsiveness’ to the Arab mediators’ pressure? Most probably nothing. But even if their agreement not to retaliate came at a price, was it worth the cost in terms of lost credibility and reversing last year’s gains? And have we forgotten that Israel has never abided by the terms agreed in all previous mediations of this kind, especially regarding the lifting of the siege on Gaza and allowing reconstruction?

The Hamas leadership may have gained the approval of the Arab mediators, but it has certainly suffered a big loss among its Palestinian, Arab, Muslim, and international supporters. It has also irked other components of the regional Axis of Resistance, especially in Lebanon. I know this for a fact, though as usual, they keep their criticism to themselves when it comes to the Palestinian resistance and the mistakes it makes. Much remains unsaid in this regard.

Haniyeh, or Hamas’ leader in Gaza Yahya Sinwar, could have been expected to make a speech or issue a detailed statement answering the many questions being asked about the decision not to retaliate — and also other questions about divisions within Hamas ranks. There is much talk of a disagreement between one faction which drew up plans for retaliation and insisted on it, and another which argued for postponement and the unavoidability of submitting to the Arab mediators’ pressure. The latter got its way, and the former backed down to preserve the movement’s unity and cohesion.

I don’t doubt the continued strength of the resistance or the wisdom and courage of its leaders, or that the colonialist Flag March was just one episode in an ongoing confrontation and war of liberation. Nor that the failure to retaliate for it can be offset by some other, more effective, action. But candour and transparency are needed. The resistance has nothing to lose these days, and the Israeli occupier is in a weakened state with its Western backers preoccupied with Ukraine and uninterested in it or its schemes.

The Palestinian resistance’s perennial problem has been Arab mediators who are remote-controlled by the US, some of whom have become more concerned for Israel and its wellbeing than their fellow Arabs or the Arab and Islamic holy sites in Jerusalem.

The resistance groups in the Gaza Strip made a mistake, in my view, by not retaliating or even by postponing retaliation, and by heeding the US and Israel’s brokers who exploit the resistance to safeguard their interests and thrones. Hamas and Islamic Jihad should rectify this error as soon as possible. The resistance is capable of regaining and strengthening its deterrent power. The appropriate time and place to do that are now.

0 thoughts on “Why didn’t the resistance retaliate?”