HOME / WORLD / Israel exploits the Palestinian trauma of the Nakba 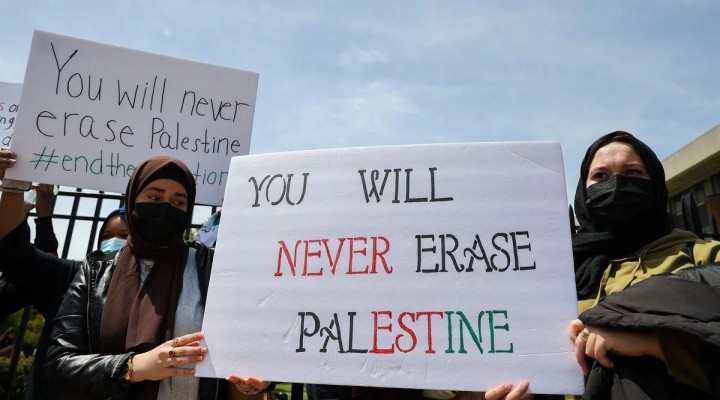 When Palestinians speak of their ongoing Nakba (Catastrophe), they are imparting a political consciousness which the international community refuses to recognise. For world leaders, diplomats and international organisations, Palestine is just fragments of a land and people without a narrative, as evidenced by the mainstream references to Sheikh Jarrah, Gaza, Khan Al-Ahmar, Jerusalem, Jenin, Tantura, Deir Yassin, Palestinian refugees and all other violations committed by Israel which are dissociated completely from its settler-colonial violence. For Israel, such oblivion is, of course, so much easier. Denying the Nakba is just one part of the fake Israeli narrative. Exploiting the Nakba to threaten more violence against the Palestinians is another tool for Israeli lawmakers.

Likud MK Israel Katz posted a video of himself on Twitter recently threatening another Nakba for Palestinians while speaking in the Knesset. In a warning to Palestinian students waving Palestinian flags at university, Katz evoked the 1948 Nakba: “Yesterday I warned the Arab students, who are flying Palestine flags at universities: Remember 48. Remember our independence war and your Nakba, don’t stretch the rope too much.”

The threat elicited a response from Palestinian Israeli lawmaker Aida Touma-Sliman. This was countered by yet another explicit threat from Katz: “If you don’t calm down, we’ll teach you a lesson that won’t be forgotten.”

Nakba denial was imperative for the settler-colonial state’s foundations. As decades passed, the earlier oblivion became part of the colonial violence entrenched in Israeli institutions. In 2009, for example, the then Israeli Education Minister Gideon Saar stated, “There is no reason to present the creation of the Israeli state as a catastrophe in an official teaching programme… In no country in the world does an education curriculum refer to the creation of the country as a ‘catastrophe’.” At the time, Israel’s education ministry ordered references to the Nakba to be removed from Palestinian text books for young children.

The 1948 ethnic cleansing of Palestine, in which 700,000 Palestinians were forcibly displaced by Zionist paramilitary troops and terrorist gangs, is the most visible aspect of Israel’s foundations and Palestinian dispossession. The massacres which took place then and in later years are also part of Palestine’s Nakba narratives, as are the more than 500 Palestinian towns and villages wiped off the face of the earth. Israel has also refused to declassify documents pertaining to the Nakba, maintaining that preventing researchers from accessing archive material will prevent verification and any statements made will fall within the parameters of allegations.

Of course, the lengths to which Israel goes to hide Nakba-related material only proves its knowledge of the atrocities perpetrated against the Palestinians. Katz’s recent warning illustrates Israel’s control over how it disseminates the Nakba both in terms of memory and violence. From a position of negating the Nakba, or criminalising any remembrance, Katz, like other Israeli politicians, has been able to navigate the realm of Zionism’s “Plan Dalet” with absolute impunity for historical, ongoing and present violence.

Yet the threat is also evidence of how Palestinian narratives are in dire need of more space for articulation. Katz’s references to the Nakba while Palestinian voices are annihilated should shed light on how Israel is controlling much of Palestine’s collective memory and abusing it to make a point which Palestinians have been insisting upon: the Nakba is ongoing. Oblivion, in this case, was clearly not an option for Katz, not when Israel can play upon and exploit the unresolved historical trauma of the colonised Palestinians and their land.

0 thoughts on “Israel exploits the Palestinian trauma of the Nakba”