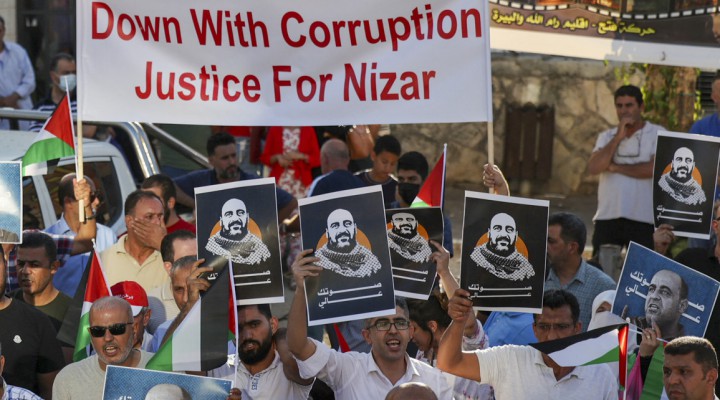 Far from representing the interests and defending the rights of Palestinians, the PA’s engagement with Israel is nothing more than a desperate attempt to hold onto power

Since the leader of the Palestinian Authority Mahmoud Abbas met with Israeli Defence Minister Benny Gantz last year, Israeli media has focused on a purportedly “confused policy”. Yet despite seemingly diverging views on how to approach the PA, there is still a unanimous decision not to engage politically in terms of negotiations.

Gantz’s meetings with Abbas focused mainly on security coordination and some meagre concessions to Palestinians, which should have been addressed as both human and political rights, rather than bartering issues.

It must be remembered that Gantz’s overtures to the PA were made within the context of US Deputy Assistant Secretary for Israel and Palestinian Affairs Hady Amr calling for the strengthening of Abbas, for fear of a popular Palestinian uprising, particularly after the killing of Palestinian activist and critic Nizar Banat. In July, Amr stated he had “never seen the Palestinian Authority in a worse state,” and recommended that Israel takes steps in alleviating the PA’s woes.

“To put it succinctly, the PA perceives a profitable angle for itself in barking up the wrong tree. Israel has no intention to negotiate with Abbas, yet for its own colonial expansionist agenda, it serves to have the PA dependent on its assistance”

Israel, the US and the international community know how to manage the PA, but a new leadership seeking an alternative to the PA’s corruption and collaboration with Israel would disrupt the smooth workings in Israel’s favour, which are rooted in the two-state compromise.

The international community may call for democracy in Palestine, but it still created anti-democratic conditions when failing to recognise Hamas’s victory at the polls in 2006. Likewise, the PA is unlikely to appreciate democratic initiatives, even by independent candidates, that threaten to disrupt its status quo.

Yet, PA officials have increased their rhetoric of finding “a political horizon” through discussions with Israeli officials. The PA’s senior official and advisor to Abbas, as well as member of the Palestine Liberation Organisation (PLO), Hussein Al-Sheikh met with Israeli Foreign Minister Yair Lapid in March.

In a tweet encapsulating the meeting, al-Shaikh said he “reconfirmed the necessity of having a political horizon based on signed agreements and the resolutions of international legitimacy,” while also calling for a cessation to “unilateral measures that obstruct the two-state solution.”

As Israeli violence raged in Jerusalem and al-Aqsa, Abbas also held a meeting with the Shin Bet’s head of security, Ronen Bar, under the pretext of supposedly quelling “tensions”. However, with security coordination remaining the primary link between Israel and the PA, it is more likely that the trend initiated by Gantz to quell the Palestinian unified efforts at resistance through coordination with Ramallah is now being adopted by other Israeli state institutions.

Despite no realistic prospects for a two-state solution and growing support for a single unified state, the PA is clinging to this paradigm because any other political resolution threatens to render it irrelevant, says @walzerscent https://t.co/fFPf3rfnX2

Days earlier, Abbas ordered the security services to raid Jenin and Hebron, in a bid to cleanse both cities of Palestinians involved in resistance activities which were described as “chaos that undermines the flow of life and investment opportunities in the occupied West Bank.” Suppressing Palestinian resistance activities works for Israel and the PA, meaning there is no discrepancy between Gantz’s aims and those of Abbas.

While the PA keeps floundering, it must also be said that Israel’s approach may temporarily work in its favour. Keeping in mind that Israel would also prefer to deal with the existent collaborative entity, strengthening the PA is something that the Israeli government is not averse to and had indeed declared would be its strategy.

Since Abbas’s meetings with Gantz, which the PA attempted to portray as a breakthrough, Israeli officials have insisted that no two-state dialogue will take place. If Abbas is hoping that Lapid’s tenure would bring a shift in the Israeli government’s policy, it has been quashed unequivocally.

Lapid could replace current Israeli Prime Minister Naftali Bennett in 2023. “I will abide by every agreement that I made with my partners,” he declared, which also included no diplomatic negotiations with the PA.

To put it succinctly, the PA perceives a profitable angle for itself in barking up the wrong tree. Israel has no intention to negotiate with Abbas, yet for its own colonial expansionist agenda, it serves to have the PA dependent on its assistance.

Security coordination, after all, allows Israel to subcontract its colonial violence to the echelons in Ramallah. In return for maintaining its position, the PA is of course expected to comply with Israel’s unquestioned security narrative.

Since the coalition government is decisive in terms of refusing negotiations with the PA, and intent on further expanding illegal settlement construction, the PA’s meetings with Israeli officials hold no gain for Palestinians.

Just as the two-state compromise was profitable for the PA in terms of the international community investing in illusory state-building, the current concessions offered by Israel’s coalition government offer a temporary lifeline for Abbas.

“If PA officials truly wanted a political horizon, their first step would be to hold democratic elections and allow the Palestinians the chance to vote them out and choose a political alternative”

If the PA keeps touting the two-state paradigm, Israel benefits from the international community’s absolute refusal to hold the government accountable for its war crimes and international law violations against the Palestinians. The PA is merely fulfilling the role it was created for and sadly, it has excelled.

If PA officials truly wanted a political horizon, their first step would be to hold democratic elections and allow the Palestinians the chance to vote them out and choose a political alternative that would prioritise dialogue between the government and the people prior to the two-state compromise and security coordination with Israel.

Israel’s interest in strengthening the PA lies in creating further weaknesses in Palestinian politics. The other face of Abbas’s authoritarian rule is an internationally-funded elite which is comfortable in its position and sees no reason to relinquish its status. Al-Sheikh’s meeting with Lapid, like Abbas’s meetings with Gantz prior, are only considered breakthroughs within the PA’s propaganda.

For the Palestinian people, Israeli colonialism, and its military occupation and apartheid system, continue unabated. Neither Gantz’s concessions nor Lapid’s listening to al-Sheikh betray the Palestinians in the name of diplomacy will alter the course of Israel’s expansion and its consequences on the indigenous population.

Meanwhile, in line with what the PA is manoeuvring with Israeli officials, al-Sheikh has not been averse to extending the same duplicitous talk as he did with Lapid. As the PA’s official news agency Wafa reported, during a meeting with Amr in Ramallah in March, al-Sheikh discussed “the credibility of the international community,” which is affecting international legitimacy.

Correct, but where is the PA’s credibility in terms of repeatedly calling for the international community to maintain its two-state diplomacy, knowing full well that no independent Palestinian state will emerge out of the obsolete paradigm?

Why does the PA accuse the international community of double standards, when it knows it depends upon double standards to survive, such as pretending to be involved in Palestinian state-building while Israel continues with its colonial settlement expansion?

The facts speak for themselves – there is barely land left for a Palestinian state, yet the PA is wedded to political illusions that require nothing other than complete acquiescence to the Israeli and international narratives of Palestine.

On that note of caution, when PA officials speak of a political horizon, no political inference should be taken other than Ramallah’s immediate and desperate concern with its own survival.

The Palestinian Authority and the US are on the same page