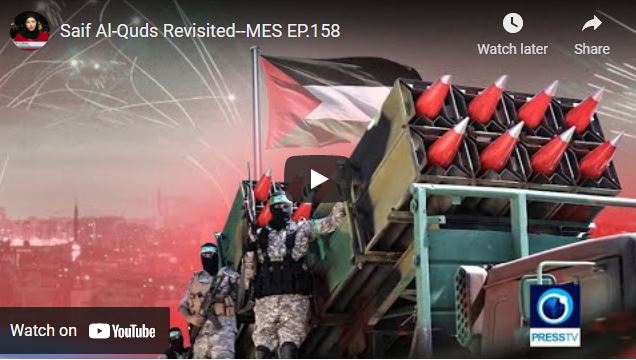 This week, the Palestinian people commemorated the first anniversary of the “Sword of AlQuds” battle, known as Saif Al Quds, in which the Palestinian resistance rained thousands of missiles on the occupied Palestinian territories, establishing a new development, and resetting the deterrence equation.

To discuss this issue with us from the occupied lower Galilee is Ani Safouri, former Palestinian detainee who spent 12 years in illegal Zionist detention centers and activist in the Abnaa Al Balad movement.

Shireen Abu Aqla was a household name across the Arab world – literally. Across the region and beyond, her calm commanding presence filled living rooms, courtyards, and camps as viewers turned to the new Al Jazeera network 24-hour Arabic TV News Channel. Joining in 1997, a year after its launch, Shireen made her own history. For a new generation of young Arab women who came of age then – and are now a driving force in journalism – she was the first female correspondent they’d seen on their television screens.

Shireen Abu Akleh was assassinated in cold blood by an Israeli sniper while covering a raid by Israeli occupation forces on Jenin camp in the occupied West Bank. Shireen’s martyrdom became a powerful and painful reminder of the huge and growing price paid by journalists covering the continuous Palestinian struggle against the monstrous Zionist occupation.

To discuss this issue with us from the Beirut is Julia Kassem political writer and commentator.