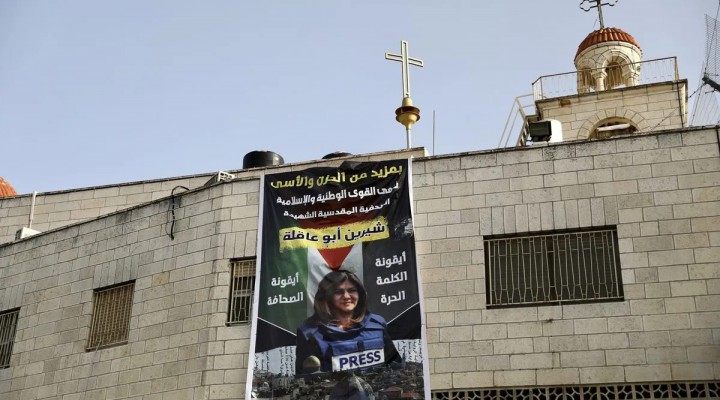 The extrajudicial killing of Palestinian-American journalist Shireen Abu Akleh by an Israeli sniper last week has led to Israel’s media clamouring for the occupation state’s impunity to be upheld. Abu Akleh was covering an Israeli raid on the Jenin refugee camp on Wednesday this week, when she was shot and killed, despite identifying herself as a member of the press. Eyewitnesses make clear that an Israeli soldier was the killer. “It was an Israeli sniper who shot at us,” they pointed out. “We were not caught up in crossfire with Palestinian fighters like the Israeli army has claimed.”

If Abu Akleh was not a dual national, her killing would have already become simply yet another statistic. As a Palestinian-American, however, the international community is pretending to have a sliver of moral obligation towards the victim, even as Israel is intent on portraying itself as innocent.

A look at the Times of Israel‘s reporting of the incident clearly indicates that the absence of fingers pointing at Israel as the culprit is greater news than the fact that the Israeli military has once again used its snipers to deadly effect. Indeed, the striking and disgusting common feature of diplomatic statements is how Israel’s role in killing Abu Akleh is being glossed over.

Both the UN’s Middle East Envoy Tor Wennesland and the EU called for investigations into the killing, in the most polite terms possible. The US fared no better in its rhetoric, even though an American citizen was killed. “We are heartbroken by and strongly condemn the killing,” US State Department spokesman Ned Price stated. “Those responsible must be held accountable.” However, the killing and its perpetrators are shielded from scrutiny, despite Israel’s track record of killing Palestinian journalists.

Likewise, UN Secretary General Antonio Guterres avoided any mention of Israel being held accountable. “Media workers should be able to carry out their work freely and without harassment, intimidation or the fear of being targeted,” he said. That’s all.

During an official update, an Israel Defence Forces (IDF) spokesperson claimed, “Freedom of the press is a core value of the State of Israel,” adding that, “This unfortunate event is being investigated by all the relevant bodies, as expected in all other democracies.”

Israel is also accusing the Palestinian Authority (PA) of refusing a joint investigation into the killing of Abu Akleh. According to Al Jazeera, PA leader Mahmoud Abbas “refused and rejected the joint investigation with the Israeli authorities because they are the ones who committed the crime.”

Israel’s concern with its image is likely to take precedence for a while, due to the focus on citizenship, rather than the extrajudicial killing. The international community knows that Israel has killed many Palestinians routinely, not just journalists. One only needs to take a look at the past month to observe a trail of extrajudicial killings which also have precedents in the colonial violence inflicted upon the Palestinian people over many years.

Moving beyond the heartbroken statements which fool no one, least of all the Palestinian people, the international community’s allegiance to Israel is not going to be shattered by the killing of a journalist who held dual nationality. On the contrary, Israel’s security narrative is being given an unwarranted boost. As usual, Israel’s ability to act with impunity takes priority over extrajudicial killings.