HOME / WORLD / Israel’s PR Problem, And Other Notes From The Edge Of The Narrative Matrix 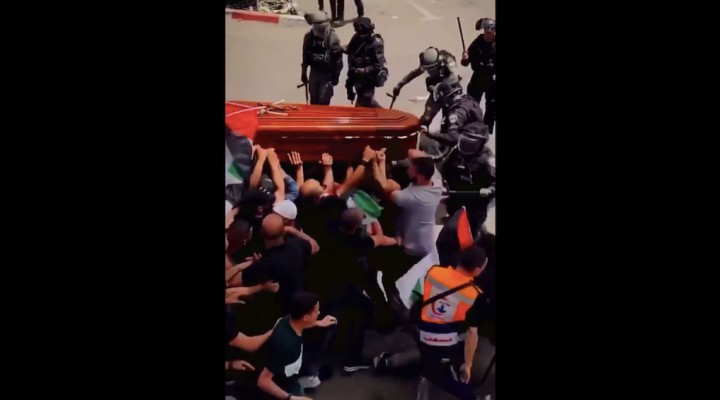 Israel’s mounting PR crisis boils down to the fact that its violence and oppression isn’t happening in some far off land as in the case with US wars, it’s happening right at home surrounded by video cameras and enforced by police and soldiers who are not adept PR spinmeisters.

Israeli apartheid is imposed not by trained propagandists but by armed thugs who’ve been told their whole lives that the people they’re responsible for keeping in check are inferior. They don’t think how it’s going to look when they, for example, assault mourners at the funeral of a Palestinian American journalist who was slain by IDF sniper fire. If the whole thing was being upheld by spinmeisters like Jen Psaki, Michael McFaul and Jake Tapper it would unfold in a much more media-friendly way, but it’s being largely upheld by people who’ve been indoctrinated with an apartheid mindframe their entire lives instead.

Combine that element with the dramatic uptick in recent years of video cameras and internet access, and you’ve got a surefire recipe for the defeat of a generations-long perception management campaign that had until that point been very successful.

I mean, whatever your opinion on Israel/Palestine in general and this latest episode in particular, you really can’t dispute that the caption in this tweet is just objectively true:

This will never be unseen. pic.twitter.com/Gtfrjqs6Q3

Public approval of the Israeli apartheid regime, like approval of the US police, has plummeted in direct proportion to the ubiquitousness of video cameras. In much the same way DNA testing vindicated prisoners who’d insisted on their innocence for years, a new technological development proved true what a marginalized population had been saying all along.

So in that sense the increasingly mainstream opposition to the Israeli status quo has been a rare victory for alternative media and citizen journalism: ordinary people recording and spreading the truth without the permission of establishment narrative managers.

I think it’s basically accurate to say that the human adventure is mostly about becoming more and more conscious, of both our inner and outer worlds. And it doesn’t get much more conscious than raw video footage circulating on a global mind network.

That’s why the Israeli regime kills journalists, and that’s why the US-centralized empire is working to legalize and normalize extraditing and imprisoning them. In a weird way it really is kind of a fight between the forces within humanity who want to switch the lights on versus the forces who wish to keep the lights off.

There is no “The Squad”. There’s the US congress which is responsible for facilitating the continued domination of a globe-spanning empire, and running alongside that there are a few social media accounts who periodically make progressive-sounding noises on the internet.

“The Squad” isn’t a political faction, it’s a soundtrack to an empire. It’s soothing noises people can listen to while the US hegemon destroys the world.

Obviously the only logical response to a war that was caused by NATO expansionism is to dramatically expand NATO.

NATO is a “defensive alliance” like Hiroshima and Nagasaki were defensive nuclear strikes.

I guess you can call anything a “defensive alliance” if you categorize everything it does as “defense”, up to and including wars of aggression to topple foreign governments. I mean I suppose if you assume it’s your God-given right to control everything that happens in the world then anyone who disobeys your will can be construed as an aggressor against your imperial divine right, and therefore anything you do in response to them is defensive in nature.

The US propaganda machine is the most powerful force on earth.

“We’re turning into China,” complained the citizen living under an empire that is vastly more tyrannical than China.

You’re only as free as you allow your world to be. The impulse to control and manipulate life is what gives rise to egoic consciousness, which is what chains us to the wheels of suffering. What presents as a path to security is really the path to insecurity.

0 thoughts on “Israel’s PR Problem, And Other Notes From The Edge Of The Narrative Matrix”