HOME / Exclusive Subjects / Mike Napier, co-founder of SPSC: The fate and liberation of the Gulf peoples is linked to the liberation of Palestine 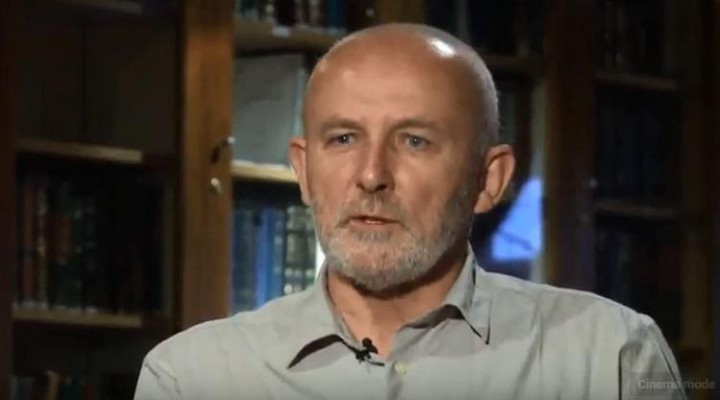 Exclusive- Mike Napier, the co-founder of the Scottish Palestine Solidarity Campaign (SPSC), described normalization between the Arab Gulf regimes and the Zionist entity as a “dagger pointed at the Palestinian people”. Napier’s statement came during a panel organized by Bahrain’s political bureau of the ‘February 14 Revolution Youth Coalition’, on the occasion of International Quds Day.

Napier wondered, “How can normalization be possible with a regime headed by prime minister Bennet who said famously: ‘I have killed many Arabs and I don’t have a problem with that? How can an Arab-killer have been made welcome by any proud regime, proud of its history and its traditions?”

The Scottish activist added, “during the Israeli elections, in the so-called ‘only Democracy’ in the Middle East, a couple of elections ago, Benny Gantz ran in competition with Netanyahu, and it was a competition to see who killed the most Palestinians. Gantz ran an election video with pictures of Gaza funerals to boost himself”.

He further shrugged off a statement by one of the Bahraini ministers who “cynically or stupidly, very ignorant said that ‘Israel as part of the heritage of the whole region, historically, so the Jewish people have a place among us”, and commented, “The Israeli regime is a Zionist regime based on the colonization of Palestine, the expulsion of all the native people, Palestinian Arabs, some of them in the past were Christians some, most of them are Muslim and Jewish before the dark shadow of Zionism arose over that region and forced one group away”.

Napier affirmed that Zionism has not in common with the Jewish people. He said, “Jews have lived in safety and harmony among Arab in Muslim and Arab countries. For centuries, while they were being mortared and slaughtered in Europe”, adding, “It’s very important for these short-sighted leaders who want to form an alliance with Israel because they think that is the open door to an alliance with America to remember what happened in Afghanistan or Iraq for example”.

He stated, “The west used Iraq for many years to attack the Iranian revolution. Half a million or a million died, but after Iraq had served the purpose of the West they then turned up on it and make sure that it was put back in its box. The country of Iraq was destroyed even though it had allied with the west against the rand for the war preceding that. The Afghan people were supported, armed, and pumped with weapons in order to fight the Soviet Union and defeat that invasion, but they were then they were attacked after they have been used in that war. And Afghanistan like Iraq was reduced to rubble, the country was destroyed and devastated”.

Napier asserted that those regimes which are allying with the NATO powers need to learn some of the lessons of history, warning that “the Palestinian people face a doom of being completely driven from Palestine by the Zionist regime. This is a plan that opening about it is not a secret, and they resist amazingly. They resist even though they face Israel, America, Britain, the European Union, Morocco, Oman, Saudi Arabia, the United Arab Emirates, and so on”.

He averred that by all accounts, “they should have surrendered and given up, but still they resist. And as long as they resist, the Zionist regime will not be legitimate, will not be secure, and will face at some time in the future the wrath, the justified wrath of hundreds of millions of Arabs and other peoples of the Middle East, who know that this Arab-killing regime, this regime of ethnic cleansing and slow-motion genocide, of strangulation of Gaza will meet its justified faith”.

The Scottish activist commended the panelists to spare no efforts in supporting the Palestinians stressing that “the Palestinians have no one to rely upon except you and me and people like us. We need to come together. We need to be public. We need to try to defeat Israel, in every way possible, militarily and politically”.

He affirmed that the occupation is weakening in many ways noting that the boycott movement, which isolates Israel is strong in many parts of the world. “We must do so much more but peoples of the Middle East also realize already that their struggle for their freedom against their own dictatorships, the Palestinians must be a part of that, and they cannot be free as long as Palestine and the Palestinians face this doom at the hands of the Israeli regime”, he said.

He wrapped up, “Dark days but freedom will come”.

0 thoughts on “Mike Napier, co-founder of SPSC: The fate and liberation of the Gulf peoples is linked to the liberation of Palestine”