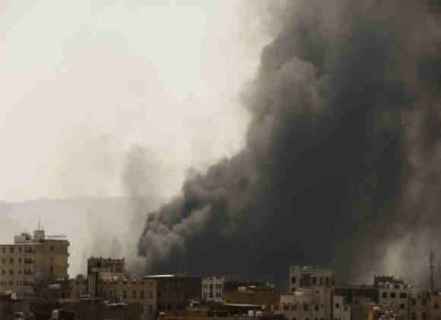 Is the latest escalation a prelude to a deal, or a warning of worse to come?

On Sunday, Yemen’s Houthi Ansarullah launched a major drone and missile strike at the heart of the Saudi oil industry in Dhahran and Ras Tanura, site of a huge refinery and the world’s biggest oil export terminal.

According to Houthi spokesman Yahya Sarie, 14 drones and 8 ballistic missiles were deployed in the operation which also targeted Saudi Aramco facilities in Jazan, Asir and Dammam.

This amounts to a concerted assault on the oil industry that Saudi Arabia’s economy relies on, aimed at inflicting as much material and moral damage as possible on the country’s government.

As a result, oil prices rose to over $70 per barrel for the first time in two years, reflecting market fears about Saudi Arabia’s ability to continue exporting crude at current levels.

And the US embassy warned its nationals in Saudi Arabia – around 6,000 of whom reside in the oil producing Eastern Province where Saudi Aramco is based—to take precautions and avoid travelling due to the risk of further missile and drone attacks.

This happened just ahead of the sixth anniversary of the start of the Saudi-led war on Yemen, which has failed dismally to achieve its aim of defeating the Houthis, forcing them to surrender control of the capital Sanaa, and restoring the internationally recognised government of Abed-Rabbo Mansour Hadi.

First, the Houthi offensive against the city and province of Maareb, the recognised government’s last remaining stronghold in northern Yemen and location of the country’s biggest oil and gas reserves. The Houthis have made major gains in the area against a hybrid coalition consisting of the Islamist (Muslim Brotherhood) Islah Movement, forces loyal to the Congress party of slain former president Ali Abdallah Saleh, al-Qaida fighters, and army units affiliated to Hadi’s government.

Secondly, the failure of indirect negotiations held in Oman last week between the US envoy to Yemen and a Houthi delegation. According to the Houthis, the talks stalled because the Americans demanded they immediately stop fighting, retreat from Maareb and refrain from launching any missiles or drones against Saudi territory. The Houthis deemed those demands to be arrogant and at variance with realities on the ground. They replied that the war should be ended by those who started it, and that they should also lift their blockade of Yemen (especially on the port of Hodeida), allow airports to reopen, and agree to talks about reparations.

The war on Yemen initiated by Saudi Crown Prince Muhammad Bin-Salman has achieved the opposite of what he intended. It has strengthened and empowered the Houthis, provided Iran with a political and military foothold in the southern Arabian Peninsula, and jeopardised Saudi Arabia’s security and its standing in the Islamic world while draining it financially and militarily in a protracted war of attrition.

Houthi missiles and drones now pose a strategic threat to the Saudi oil industry. American-made Patriot missile defence systems failed to prevent them from hitting the kingdom’s most important oil installations at Abqaiq and Khreis in September 2019, or striking fuel storage tanks in Jeddah last year (also bringing the war home to the Saudi civilian population). Now they have hit vital facilities on the Gulf Coast, from where some seven million barrels of oil are exported daily.

The Houthis say such attacks will continue until the Saudi-Emirati coalition stops bombing Sanaa and attacking their forces advancing on Maareb and lifts the blockade of Hodeida. These demands are unlikely to be met, so the immediate outlook must be for further escalation.

The Houthi drone and missile attacks on Saudi infrastructure in Dhahran and Ras Tanura — and previously Jeddah, Abqaiq and Khamis Mushait – were highly precise and, according to official coalition statements, did not cause any casualties. Senior Houthi sources warn that this restraint may be abandoned if Saudi and Emirati warplanes revert to their earlier practice of bombing wedding parties, funeral gatherings, factories, hospitals and schools which cost tens of thousands of lives.

The question now is whether the current escalation is an attempt by both sides to strengthen their hands ahead of a US-brokered deal in Yemen, or related to the more important impending negotiation between Iran and the US about reviving their nuclear deal.

We do not know the answer. What we do know is that the Saudi leadership is under simultaneous pressure from two sides: from the new US administration to curb the crown prince and mend his ways, and from the Iranians and Houthis to end the war on Yemen and hostility towards Tehran.

The Trump administration practiced financial extortion against Saudi Arabia, and the Biden administration is augmenting that with political extortion behind a façade of concern for human rights and the assassination of journalist Jamal Khashoggi. The blame for this situation must lie with the person who led the kingdom into this trap with eyes wide open.

0 thoughts on “Upping the ante in Yemen”