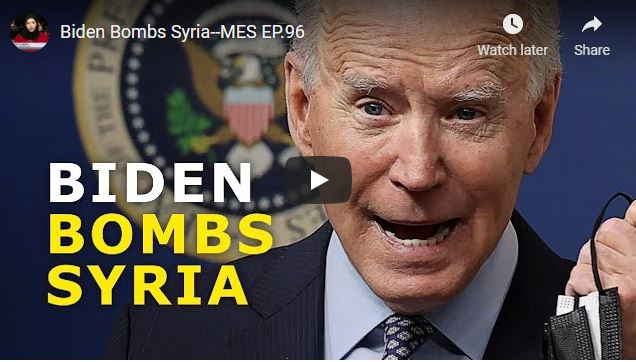 In his first military action since inauguration, Joe Biden launched a series of airstrikes against Syria, signaling a renewed imperialist offensive in the region. This serves as a reminder that for victims of U.S. imperialism abroad, there is no lesser evil. It is simply: “back to normal” for the US as Biden and his Vice President Kamala Harris are only escalating the wars started by former President Barack Obama.

To discuss this issue with us from Beirut is Shramine Narwani, journalist and political commentator.

In the dying days of Donald Trump’s presidency, former US Secretary of State Mike Pompeo announced his imprudent decision to designate the Yemeni Ansarullah resistance movement as a terrorist organization. Shortly after, Biden’s Secretary of State Antony Blinken reversed Pompeo’s decision vis-à-vis Ansarullah, allegedly to avoid obstructing the delivery of food and medicine to the Yemeni civilians who are being starved to death in the Saudi-orchestrated genocide.

To discuss this issue with us from Beirut is Laith Marouf, political commentator.

The US airstrike on Syria: Meet the new boss, same as the old boss, and the boss before that