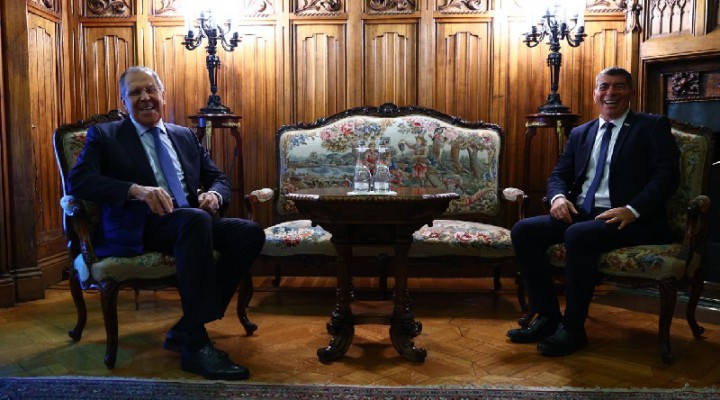 Wednesday’s press conference in Moscow between the Russian and “Israeli” Foreign Ministers authoritatively debunked the rampant fake news that’s been virally spreading throughout the Alt-Media Community for years about the true nature of their bilateral relations, which remain excellent despite consistent efforts from some influential forces to misportray them as rivals for reasons that only such individuals can account for if publicly but politely challenged by their audience to do so.

Every member of the Alt-Media Community is familiar by now with the rampant fake news narrative that’s been virally spreading throughout their sphere of the information space for years already alleging that Russia and “Israel” are supposedly heated rivals with one another, so much so that President Putin might even be secretly plotting an all-out war against the self-professed “Jewish State”. The latest disinformation attack in that direction came late last month after it was falsely reported that Russian Special Envoy to Syria Alexander Lavrentiev threatened to shoot down “Israeli” jets over international airspace the next time that they bomb Syria. I responded to this ridiculous claim that even the most casual objective observer should have immediately known was unrealistic earlier this week in an analysis for The Alt World asking “Should Iran Be Worried About Russia’s Coordination With ‘Israel’ & The US In Syria?” That piece cites recent diplomatic developments and my prior work from late last month about the S-300s, the latter of which provides a list of my 15 most relevant analyses over the years for the reader to review at their leisure.

Relying On Lavrov’s Diplomatic Authority To Set The Record Straight

Despite my detailed analyses being based on objectively existing and easily verifiable facts that are always hyperlinked to their original source (which is usually an official one whenever possible), the most indoctrinated members of the Alt-Media Community still angrily claim that they’re “anti-Russian”, “divisive”, and/or “Zionist” “propaganda”, so powerful is the false narrative that they’ve been brainwashed into believing. That’s why it’s so important to review the highlights of Wednesday’s press conference between the Russian and “Israeli” Foreign Ministers as reported by the official website of the Russian Foreign Ministry, which can’t credibly be accused of being “anti-Russian”, “divisive”, and/or “Zionist” “propaganda”. The purpose in doing so is to hopefully enlighten the “moderate” members of the Alt-Media Community who might be willing to finally listen to the truth about Russian-”Israeli” relations so long as it comes from none other than Foreign Minister Lavrov, the most authoritative source on Russian foreign policy by virtue of his position as its top diplomat. What follows is a list of bullet points summarizing the gist of his key statements, followed by the specific quotes themselves:

A Collection Of Key Quotes

“We believe that Russian-Israeli bilateral ties are making progress in accordance with the agreements reached between President Vladimir Putin and Prime Minister Benjamin Netanyahu.”

* Russia & “Israel” Are Comprehensively Strengthening Their Relations, Including In The Defense Sphere:

“We reiterated our commitment to promote interaction across all areas, including the economy, culture, science and education. Steady contacts have been established between the defence ministries.”

* Neither Supports The Dangerous Rehabilitation Of Nazism In Europe:

“Russia and Israel have consistently opposed the increasingly frequent attempts to rewrite the history of WWII, to glorify Nazi war criminals and to revive neo-Nazism. We emphasised the importance of our acting jointly with the overwhelming majority of other countries in adopting the related annual resolution by the UN General Assembly.”

“Moscow welcomes the normalisation of Israel’s relations with a number of Arab states and believes this should help advance a comprehensive settlement in the region, including the long-standing Palestinian problem.”

* Russia & “Israel” Are On The Same Page As Regards A Peaceful Resolution To The Syrian Conflict:

“With regard to Syria, we have an overlapping position on the need for a political settlement based on the principles laid down in UN Security Council Resolution 2254. We declared our principled support for Syria’s sovereignty, unity and territorial integrity, and the Syrians’ legitimate right to decide on their own future without outside interference.”

“We updated our Israeli friends on Russia’s activities as part of the Astana format and other channels in order to help overcome various aspects of the Syria crisis. We focused particularly on stepping up the Constitutional Committee’s activities and shared our steps designed to make the upcoming 6th meeting of the Constitutional Committee’s drafting committee productive.”

“We also spoke about the need to help overcome the humanitarian crisis in Syria, where the infrastructure has been destroyed and the people are suffering badly in the wake of crippling sanctions imposed by the United States and other countries.”

“We mentioned Russia’s initiative to form a collective security system in the Gulf region with the potential to include neighbouring countries.”

“I believe we had productive talks. We appreciate mutual trust in our contacts with our Israeli colleagues on all matters on the bilateral and multilateral agendas.”

* Russia Is Against The ICC’s Investigation Into “Israeli” War Crimes In Palestine, Believing It’s Politically Biased:

“We have a negative impression of this body. This is our principled and consistent position. When the ICC was created, we hoped it would be an independent and professional judicial body with the potential to eventually become a universal body. In reality, it turned out to be the other way round.

The ICC has not lived up to our expectations. It has repeatedly demonstrated a political bias, a lack of professionalism or understanding of certain rules of international law, made mistakes in using them and, contrary to the Rome Statute provisions, unjustifiably tried to expand its competence by invading spheres that are beyond its terms of reference.”

Russia has refused to participate in this and has revoked its signature under statute. Israel did so even earlier. China, India and many other states are not part of the ICC. Even the countries that are parties to the Rome Statute recognise the systemic problems plaguing ICC functions. Unfortunately, the ICC has discredited itself and the mission that was entrusted to it. Any action taken in The Hague must be viewed through this lens and in light of the court’s tarnished reputation.”

As evidenced from the above, there’s no doubt that Russia and “Israel” are much more akin to allies than rivals nowadays. They sincerely trust one another and Moscow supports Tel Aviv on practically every issue of significance, including its opposition to the ICC’s investigation into the self-professed “Jewish State’s” war crimes in Palestine. The Eurasian Great Power hopes to see its de facto regional ally eventually incorporated into the proposed Gulf collective security system, and it also seemingly appreciates the insight that it provides about the Syrian peace process as well during their close consultations on this matter of mutual interest, especially as relates to the Arab Republic’s ongoing constitutional reform. Unlike what many in the Alt-Media Community have been falsely led to believe for years and even as most recently as last month, there exist no serious military disagreements between Russia and “Israel”, as confirmed by Lavrov himself when talking about the “steady contacts” that have been established between their Defense Ministries. This key quote crucially debunks the fake news about Russia allegedly threatening to shoot down “Israeli” jets.

Nevertheless, it’s all but certain that some of the Alt-Media Community’s key influencers – particularly those whose claim to fame is their coverage of the Syrian conflict – will either suspiciously ignore the objectively existing and easily verifiable policy facts presented in Wednesday’s joint Russian-”Israeli” Foreign Ministers press conference or concoct some crazed theory to protect their precious disinformation narrative about their ties. At all costs, the most responsible truth-seeking members of the Alt-Media Community must hold those said influencers (who in some cases might arguably be deliberate deceivers) to account by publicly but very politely challenging them about their response to this latest diplomatic development. They must be presented with the Russian Foreign Ministry’s official readout of Wednesday’s joint press conference that’s accessible here and asked to share their opinion about Lavrov’s official policy pronouncements. It’s time to find out who’s lying to themselves due to their own wishful thinking delusions as influenced by Alt-Media disinformation and who’s deliberately lying to others about this sensitive issue, including through suspicious omission of the facts.