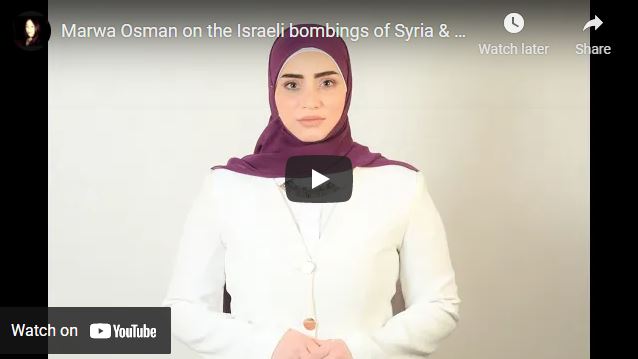 I spoke yesterday with journalist & geopolitical analyst Marwa Osman on the criminal Israeli bombings of Syria yet again two nights ago, violating Lebanese airspace again to do so.

Marwa noted that Israel put at risk the lives of two civilian airplanes in Lebanese & Syrian airspace, particularly the 130 civilians and flight crew on a flight coming from Abu Dhabi to Beirut when Israel attacked Syria.

She also described the psychological terrorism Israel daily commits against Lebanese (and Palestinians in Gaza) with their violations of Lebanese (and Gazan) airspace with warplanes and drones, as well as Israeli bombings of Lebanon, including very near her home in the south.

Marwa detailed the electricity, fuel & financial crisis in Lebanon and how that came about, as well as how the corrupt oligarchy in power are strangling Lebanese civilians financially and in every way imaginable—and how the political & military strategies of the Lebanese Resistance party, Hezbollah, caused a significant, scrambling, reaction from the US (imposing sanctions on Lebanon & Syria).

*apologies for the audio distortions in the 2nd half of the interview.

The bombs rain down as I visit the Idlib frontlines, and witness the atrocities committed against civilians by NATO-backed terror

0 thoughts on “Marwa Osman on the Israeli bombings of Syria & the electricity, fuel & financial crisis in Lebanon”