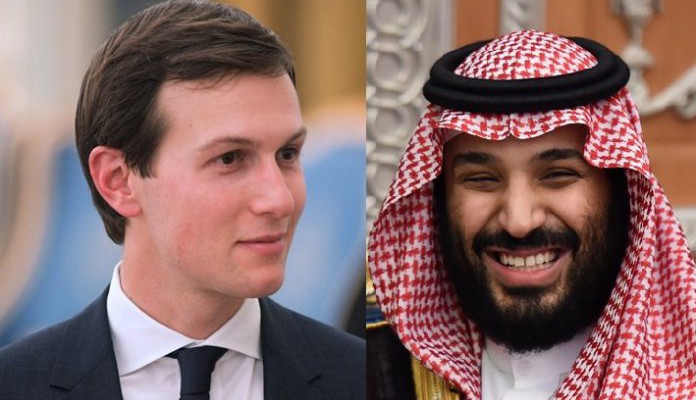 Why did so many Arab leaders and princes grovel to Trump’s son-in-law?

Published excerpts from former US presidential son-in-law Jared Kushner’s memoir, Breaking History, give the impression he was a veritable ‘Superman’ in the Middle East: giving instructions to Arab leaders and officials and never being disobeyed, formulating policies, imposing conditions, drafting peace agreements, and arranging financial and military deals.

To be specific, the ‘accomplishments’ and ‘heroics’ Kushner claims in the Arab world during the four years when he worked as President Donald Trump’s advisor can be summed up in the following points:

— He claims he mediated between Saudi Arabia and Russia during their oil production dispute when President Putin was pressing Saudi Arabia and OPEC to reduce production in order to raise prices. Jared supposedly used his relationship with a Russian businessman close to Putin to broker a mutually acceptable compromise and thereby saved the US oil industry, which was facing collapse if prices had fallen any further.

— He foiled an Egyptian-backed resolution at the UN Security Council condemning Israeli annexation of the West Bank as illegal. When it became clear that Barack Obama would not veto the resolution, Netanyahu got Jared to contact Egyptian president Abdelfattah al-Sisi and ask him, in Trump’s name, to withdraw the resolution. He obliged.

— Kushner boasted he managed to break US presidential protocol by getting Trump to host Muhammad Bin-Salman (MBS) for a private lunch at the White House. (Protocol dictated that the president only invites fellow heads of state or government to such functions, and MBS was only the number three man in Saudi Arabia at the time). The lunch went extremely well, and Bin-Salman promised to stop funding terror, improve women’s rights, and pay the expenses of US forces and bases in his country.

— Jared played a pivotal role in reconciling Saudi Arabia and Qatar, by personally conveying proposals for resolving their dispute from MBS to Emir Tamim Bin-Hamad in Doha, and then arranging a friendly phone call between them.

— He and his team drafted the text of the ‘Abrahamic Peace’ documents, and he personally persuaded the UAE to join Bahrain in signing them to ensure it would not be alone and to encourage other countries to join up. He also arranged the lavish White House signing ceremony, with the help of his sister (Arab-style nepotism) and top pro-Israeli lobbyists, including David Friedman who became ambassador to Israel and played a key role in transferring the embassy from Tel Aviv to occupied Jerusalem.

As the architect of the ‘Deal of the Century and the Abrahamic normalisation agreements, Kushner obviously drew his clout from his son-in-law status and the power of the Israel Lobby which wields formidable influence in the White House and other US executive and legislative institutions. But he took his lead from his mentor and father’s friend Benjamin Netanyahu, and it is no surprise that he proved to be a faithful acolyte.

The question is: why did so many Arab leaders and princes yield to the dictates of this political novice?

We have yet to hear any denial or confirmation of the incidents recounted from those who were mentioned in Kushner’s memoir, especially in the Gulf region: the UAE, Saudi Arabia, Qatar, and Kuwait, (whose late emir Sabah al-Ahmad played the central role in achieving Gulf reconciliation and made an enormous effort to prevent war at a time when an invasion of Qatar was on the cards).

Kushner told no more than one-quarter of the truth in his memoir. Many secrets have been kept under wraps, especially after Kushner went into the business of investment and financial deal-making with his eye on his friends in the Gulf. We’ll have to wait for the memoirs of other Trump-era officials, many of whom had little regard for Kushner, to fill in some of the gaps.

0 thoughts on “Jared Kushner: Superman of the Middle East”