Iran and Russia: Falling out? 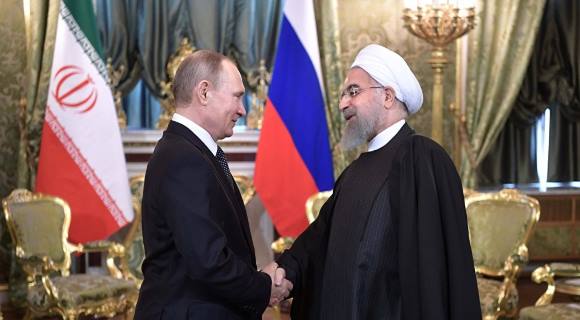 Signs of tension as Putin seeks to appease Netanyahu over Syria

Russian President Vladimir Putin surprised a lot of people, ourselves included, when he proposed on Sunday the formation of an ‘international mechanism’ to restore normalcy to Syria after the defeat of the Islamic State group (Daesh) is completed. This would entail the establishment of a ‘working group’ to ensure the withdrawal of foreign forces, make arrangements for the restoration of state sovereignty over all parts of the country, and maintain its territorial integrity.

The cause of the surprise was that this came just three days after Israeli Prime Minister Benjamin Netanyahu paid a visit Moscow, and less than a week after Syrian President Bashar al-Asad went to Tehran for talks with Iranian leader Ayatollah Ali Khamenei, President Hassan Rowhani and Gen. Qasem Soleimani – the commander of the Revolutionary Guards’ Qods Brigade who is in charge of implementing the Iranian leadership’s Syria policy on the ground.

Worryingly, Netanyahu declared at his weekly cabinet meeting that he had agreed with Putin on the withdrawal of all foreign forces (except Russia’s) from Syria, and on the formation of a working group to coordinate on this issue, of which Israel would be a member. He stressed he had made clear that Israel would not tolerate any Iranian military presence in Syria and would continue taking military action against it.

One Russian newspaper, Nezavesemeya Gazeta, claimed that Russia’s agreement to set up this ‘working group’ was in response to Asad’s ‘un-agreed’ visit to Iran. It said Israel was trying to facilitate a divorce between Moscow and Tehran, and that Asad’s trip was a real blow to the Kremlin as it showed that he was intent on keeping Iranian forces in his country.

Four points can be concluded form the above:

First, that Asad’s ‘secret’ visit to Tehran – which was only made public after it was over — was not coordinated with the Russians. He may have gone to discuss a joint response to Russia’s inappropriate rapprochement with Israel and its implicit agreement to allow Iranian forces in Syria to be targeted if they don’t withdraw voluntarily.

Secondly, what worries Netanyahu most is the prospect of Iran opening up a second resistance front in southern Syria — alongside Hezbollah’s front in southern Lebanon – that would focus primarily on containing Israel, while also  putting pressure on its occupation forces in the Golan Heights. That is why he insists on the withdrawal of all Iranian and allied forces deployed in Syria since the 2011 crisis.

Third, there is a clear rift in relations between Iran and Russia over Syria. That explains why Putin has declined, at least for the time being, to press Turkish President Recep Tayyip Erdogan to live up to his commitment at the Sochi summit to get Hay’at Tahrir ash-Sham(the Nusra Front) out of Idlib. Russia has also failed to take a strong stand against the Turkish security zone in northern Syria accompanied by a military plan to preserve the region’s Syrian identity.

Fourth, bringing Israel into the proposed ‘working group’ would make it a main player in the Syrian dossier. If confirmed, such a step – even if taken merely to appease the US and some European countries – would raise many question marks. Neither Syria nor Iran could ever accept it.

The controversy over the exclusion of Iranian Foreign Minister Mohamed Javad Zarif from the Iranian leadership’s talks with Asad appears to confirm the security/military focus of the Syrian president’s visit. He is likely to have discussed operational issues unrelated to the foreign minister’s diplomatic responsibilities. It could well be that Zarif may was subsequently persuaded of this, hence his decision to rescind his resignation.

Both Soleimani and Gen. Ali Shamkhani, secretary-general of Iran’s National Security  Council, have reiterated in recent days that Iran will retaliate more forcefully than in the past to any Israeli attack on Syria. This suggests a decision has been made to launch missile strikes into Israel in the event of such an attack, in the absence of a Russian green light to use S-300 air defence systems to down raiding Israeli warplanes.

We do not yet know whether the ‘working group’ proposed by Putin was a ‘trial balloon’ and an indirect riposte to Syria and Iran and their retaliation plans, or a serious proposition reflecting a deliberate plan. Either way, it reflects a worrying change in Russia’s policy and its adoption of some of Israel’s policies on Syria – particularly regarding the Iranian presence.

Many Arabs have been heartened by Russia’s return to the Middle East, seeing in it a glimmer of hope that some balance can be restored and an end put to the US and Israel running riot in the region. They will find it inexplicable if the Russian leadership stands against the use of southern Syria as a base for pressing for the liberation of the occupied Golan Heights, while failing to demand an Israeli withdrawal from the area and the application of UN resolutions and international law to achieve peace in Palestine.

0 thoughts on “Iran and Russia: Falling out?”