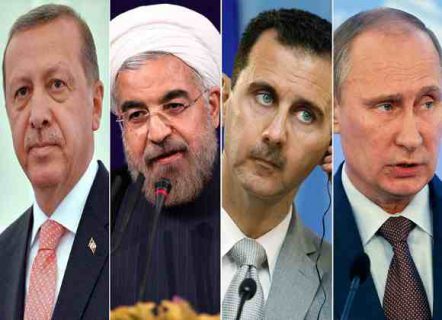 Turkish President Recep Tayyip Erodgan has some difficult choices to make in the coming few weeks. He has lost most, if not all, of his bets and assets in his strategy of playing for time, which he pursued with great skill for many months, and now needs to make his mind up.

Before discussing his options, we should take note of three important high-level meetings that are due to be held next week. If they go as planned by their organizers, they could change the face of the Middle East – starting with the Syrian crisis, passing through the Arab-Israeli conflict, and ending with the Iranian nuclear and missile dossiers. These are:

— Wednesday’s Sochi summit which will bring the Turkish president together with his Iranian and Russian counterparts Hassan Rowhani and Vladimir Putin — the host and convenor.

— Tuesday’s US-sponsored ‘counter-summit’ in Warsaw, to be held under the slogan of promoting ‘ Peace and Security in the Middle East’ and attended mostly by foreign ministers. Its stars are expected to be Israeli Prime Minister Benjamin Netanyahu, Donald Trump’s vice-president Mike Pence and son-in-law Jared Kushner, and the chief diplomats of most of the Gulf states plus Jordan and Egypt. It will focus on confronting Iran, securing Arab funding for the ‘Deal of the Century’, and launching a new and more intensive phase of normalization between Arab regimes and Israel.

— Finally, the summit in Moscow that will be confined to Putin and Netanyahu, where Syria and the Iranian presence in the country will top the agenda.

The Sochi summit will be the most important of these. It outcome will have a direct effect on the other two summits, and not the other way round. If the three leaders reach an agreement, which seems probable, that could lead to the resolution of three key issues: the future of Idlib, the proposed ‘safe zone’ in northern Syria, and the Kurdish military presence east of the Euphrates.

Erdogan will be pressed by his Russian ally and Iranian ‘friend’ to settle the fate of Idlib in line with the commitments he made last October to eliminate the ‘terrorist groups’ in the city – meaning the Nusra Front — and to revive the 1998 Adana Agreement with Syria as a an alternative to the  ‘safe zone’ and agree to the deployment of Syrian government forces east of the Euphrates.

Damascus welcomed Putin’s unexpected suggestion, at his last meeting with Erdogan in Sochi three weeks ago, that the Adana Agreement be revived. But it insisted that all terrorist organizations in the area, including those backed by Turkey, should be confronted —  i.e. Kurdish, Arab and Turcoman armed groups alike, as well as the Nusra Front — and state sovereignty restored in Idlib and all of northern and eastern Syria.

Erdogan also welcomed the Russian proposal to revive the Adana Agreement. He did so for two reasons. First, because the Russians took a firm stand against the US-proposed ‘safe zone’ and insisted on the full restoration of state sovereignty throughout Syria. And secondly, because the US did not comply with its promises in Manbij, stop protecting the Kurdish YPG militias, or withdraw its heavy weaponry ahead of the planned pull-out of US troops. That is why Erdogan publicly acknowledged that there had been contacts between Turkey and Syria at the level of intelligence agencies. A retraction of sorts followed, with Erdogan’s spokesman and trusted aide Ibrahim Gulen saying that “a relationship between intelligence agencies does not mean recognition of the legitimacy of the Syrian regime or its president who has committed crimes against his people.”

Erodgan’s admission that the two countries’ intelligence agencies have been talking is, to be sure, more important than his advisor’s caveat. The Turkish president is skilled at launching political trial balloons to gauge the other side’s reactions, or to prepare Turkish public opinion to ‘swallow’ unexpected new political steps or stances. His apparent slips of the tongue are in fact carefully calculated and aimed to achieve a specific purpose.

I have the first-hand experience of this. When Erdogan visited Cairo back in November 2012 – when Muhammad Morsi was riding high as Egypt’s elected president – he surprised his host and the ruling Muslim Brotherhood by calling for a ‘secular’ state in Egypt. This earned him much criticism from the movement and its leaders. One of Erdogan’s advisors who accompanied him on the trip asked me what I thought of this ‘bombshell’ and the Brotherhood’s reaction to it. I replied that I was surprised at Erdogan’s choice of the word ‘secular’– which in the view of many Arab Islamists is tantamount to ‘atheist’ — and wished he had chosen a different phrase such as ‘civil state’ as a compromise. The aide, perhaps after consulting with his boss, explained that the choice of the term was deliberate. Erdogan was not addressing the Egyptians, but the Turkish public. He wanted to counter domestic opposition charges that he was aligning the country with Arab political Islam in order to replace Turkey’s secular state and Kemalist heritage with an Islamic state and a neo-Ottoman revival.

There is a good chance that Wednesday’s Sochi summit could set the stage for a Turkish-Syrian reconciliation under the cover of reactivating the Adana Agreement. That would kill several birds with the same stone — including two big birds, the Nusra Front and the Kurdish Syrian Democratic Forces (SDF), which the two countries respectively consider to be terrorist. The talks between Turkish and Syrian intelligence agencies that Erdogan acknowledged were certainly not about cooperating against Israel or supporting the Palestinian cause. They were about confronting these two ‘terrorist threats’ that they each see as endangering their national security.

We fully appreciate that Erdogan bears no personal good-will towards President Bashar al-Asad and that the feeling is definitely mutual. But we know that the late Ayatollah Khomeini and Saddam Hussein loathed each other equally, if not more. Yet the Iranian leader sipped the poisoned cup and agreed to a ceasefire. Though there are big differences between the two cases, look where Iran was then after the end of that disastrous war and where it is now, both in political and military terms.

It cannot be ruled out that a Turkish-Syrian reconciliation may be imminent. That would explain the stalling of recent moves by Saudi Arabia, other Gulf states and Egypt to restore relations with Damascus

0 thoughts on “A Tale of Three Summits”