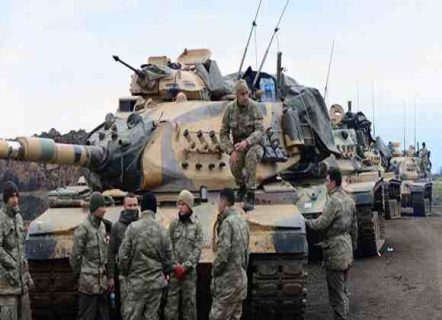 Theories abound about the bombing that targeted US troops in Manbij

The suicide bombing which targeted a restaurant frequented by US personnel in Manbij in northern Syria – killing five Americans, 11 members of the Syrian Democratic Forces (SDF) and a number of civilians – may have been a dual warning to both Turkey and the US. Its main message was that the 20-km wide security zone which President Recep Tayyip Erdogan wants to establish along the Syrian-Turkish border will not be secure at all, and that the attack – which was claimed by the Islamic State (IS or Daesh) group – could be the first drop in a deluge.

Conspiracy theories about the incident abound, as do doubts about Daesh’s claim to have carried it out. The sceptics make several arguments:

First, that Daesh has not attacked any American targets for nearly two years. This despite the US’ leading role in fighting the group, heading a 65-state coalition aimed at destroying it, bombing its bases and positions, arming and supporting its mainly Kurdish SDF opponents, and enabling them to overrun its capital, al-Raqqa, and most of the territory it controlled.

Secondly, there are powerful forces in the US which oppose President Donald Trump’s decision to withdraw all the US’ troops from Syria and stop protecting their Kurdish allies, including Defence Secretary James Mattis who submitted his resignation in protest. Perhaps US security agencies were behind the blast with the aim of impeding this withdrawal.

Third, the SDF and other Kurdish groups were fiercely critical of the US withdrawal and saw it as a stab in the back. Some suspect that they may have been behind the bombing, either directly or indirectly. They have been in control of Manbij for two years, and the American forces that conduct joint patrols with them have never been targeted before.

Fourth, the Syrian leadership strongly opposes both the presence of US forces in the country and the establishment of a Turkish-supervised security zone along its northern border. It described the proposal as an assault on it sovereignty, and was strongly supported by Russia, whose foreign minister insisted that all Syrian territory should be under the control of the Syrian Arab Army. So might this bombing have been a response?  The underworld is replete with infiltrators and schisms.

The picture remains unclear. If IS was indeed behind the blast, which cannot be ruled out, that means Trump’s declaration that the group has been defeated and destroyed was premature – reminiscent, despite the differences, of former president George W. Bush’s ‘Mission Accomplished’ announcement about Iraq.

If Daesh was responsible, that could mean it is in the process of re-emerging from the rubble of the destruction of its main bases in Mosul and Raqqa and is implementing its ‘Plan B’ – going underground to carry out ‘terrorist’ attacks and exact revenge against the Americans. Alternatively, Daesh may have decided to join forces with the regional powers that oppose the US presence in Syria, and perhaps also Iraq, on the principle of ‘my enemy’s enemy is my friend’.

It is difficult to tell at this stage which of these theories is more plausible. But it is possible to foresee that the security zone being planned by the US and Turkey could turn into a trap for both sides. Moreover, the bombing may not delay the withdrawal of US forces from northern Syria but could actually speed it up. Trump may have been provided with intelligence that these forces would be targeted by suicide bombings, so decided to pull them out rather than repeat the bloody experience of Iraq and sustain casualties.

Syria and Russia’s fierce opposition to the establishment of a security zone in northern Syria under Turkish auspices and with US blessing is highly significant. It constitutes a clear warning that requires no furtherer explanation, and implies that the consequences could be serious. The question is whether the Turkish president will get the message in one way or other, quickly reconsider his calculations, and avoid going into this costly American trap.

We have no answer, as this is just the beginning. If it is true that IS, having rid itself of the burden of administering its’ state’ and controlling territory, is reverting to suicide bombings, that may be another turning point in the crisis that could alter alliances and reshuffle the cards in the region.

0 thoughts on “The Return of Islamic State?”