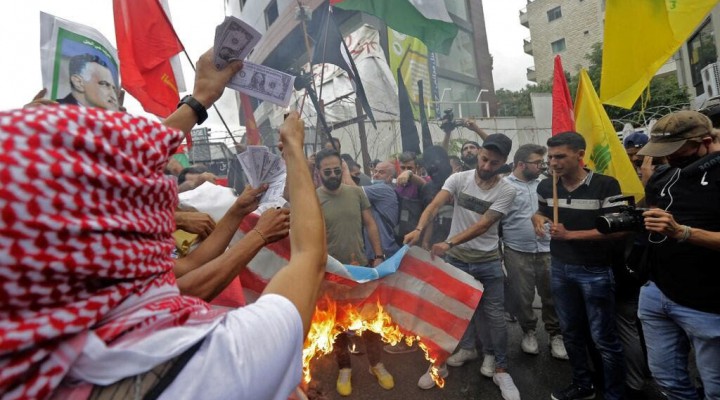 The US has deliberately engineered the country’s economic collapse, but Hezbollah won’t yield to it demands

UN High Commissioner for Human Rights Michelle Bachelet sounded the alarm on Saturday that the economic situation in Lebanon was spiralling out of control and that many thousands of its people face destitution and starvation. The warning was stark. But it wasn’t surprising given the relentless US pressure the country faces, which has more than crossed every conceivable red line.

Bachelet listed a number of reasons why she feared economic collapse was looming: thousands of businesses bankrupted, the Lebanese lira losing 80% of its value, and electric power outages becoming the norm. But she carefully avoided referring to the US sanctions that triggered the financial/currency crisis underlying the economic collapse.

The US ambassador to Lebanon, Dorothy Shea, has not been so coy. She positively gloats about the devastating impact of the sanctions and has been clear about their objectives. She demands Hezbollah’s removal from the government — claiming it is the reason why Lebanon does not get the financial aid it needs — and the formation of a new on that is not under its influence.

These demands are also the cause of the failure of the Lebanese government’s negotiations with the IMF on a $20 billion loan and the release of  $11 billion already committed by donors – even if it was packaged in talk about the need for drastic economic reforms that would badly punish the population.

The current US administration wilfully set out to collapse the Lebanese economy, not just take it to the brink, when it enforced the Caesar Act against Syria without making any exemption for Lebanon – such as allowing it to export goods through its overland crossings to Syria which are its only access to the outside world. It went as far as to require UN forces deployed in southern Lebanon not to buy supplies locally, so as to make life even harder for the civilian population which forms part of Hezbollah’s core constituency.

With every passing day the situation in Lebanon goes from bad to worse. The penniless government struggles to provide food for 200,000 of the very poorest families, and most of the country’s hospitals are facing closure due to electricity shortages and lack of medicines and financial resources.

This all leads to the conclusion that an explosion is imminent.

On Saturday, Hezbollah’s deputy leader Naim Qasem spoke out against the groups and figures putting pressure on the government of Prime Minister Hassan Diyab and denied rumours it was about to step down. He struck a defiant tone, declaring that Hezbollah and its supporters do not know the meaning of the word ‘surrender’.

Earlier, Secretary-General Hassan Nasrallah had stressed in a televised speech that Lebanon would not be starved into submission and the Lebanese resistance would not disarm, as that would provide others with the opportunity to obliterate and destroy it. He cautioned that if things reached the point of the country being starved to death, the resistance would kill those trying to kill it.

Israel and the US have incessantly tried to destroy Hezbollah by all means available. But it has inflicted two major battlefield defeats on Israel – in 2000 when it was forced it to withdraw unilaterally from the occupied ‘security zone’ in South Lebanon, and again in 2006 when it tried to exact revenge for that humiliation. Another war could well break out, and would likely have a similar outcome – except that this time, it might be the Lebanese resistance and its regional allies who fire the first shot.

The US has crossed all the red lines in Lebanon. To starve into submission is to wage war by other means, and desperate circumstances invite desperate responses. Maybe it needs someone to remind it of the 241 Marines its lost when their Beirut barracks were bombed in 1983.

0 thoughts on “From bad to worse Lebanon”