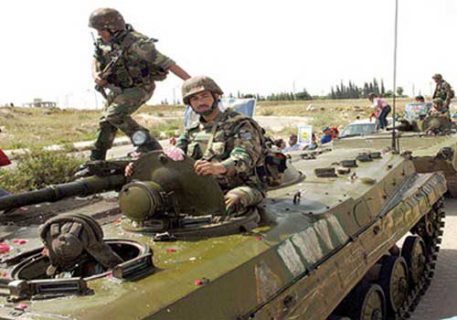 Syria and Iran can cope with another round of US sanctions. The Lebanese are the most vulnerable targets of the ‘Caeser Act’.

The Trump administration is promising Syria and its allies in Iran and Lebanon a fresh package of ‘suffocating’ sanctions in two weeks’ time with the coming into force of the so-called ‘Caesar Act’, whose provisions were passed by both houses of Congress last December.

The aim of this legislation is not only to suffocate Syria but also to inflict as much economic pain as possible on its backers, especially in Lebanon, Iran, and Russia. It targets all groups, companies, and individuals that have any dealings with Syria, provide it with funds, trade with it, or are involved in reconstruction, infrastructure or oil and gas production projects in the country.

The ‘Caesar’ after whom the ‘Syria Civilian Protection Act’ is named is a former Syrian army photographer who defected with the assistance of the CIA and smuggled out thousands of photographs documenting torture in Syrian jails and detention centers. He was given political asylum in the United States and became a frequent visitor to Capitol Hill.

The impact of this measure on Syria is likely to be limited. It has been subjected to an array of US sanctions for decades and has managed to cope with its consequences despite nine years of the on-going war. Nor should the new provisions have a major effect on Iran, or on the overland route linking Tehran to Beirut via Iraq and Syria. The country has been finding ways of living with ever-harsher US sanctions for more than 40 years. But they can be expected to have serious consequences for Lebanon. This is large because there are political forces in the country that actually welcome the legislation and its enforcement despite the damage it will do to an already struggling economy. These forces have long been complicit in the attempt to destroy and dismember Syria due to its refusal — despite being offered billions of dollars as inducement — to acquiesce to Israel’s occupation of its Golan Heights or abandon its Iranian allies and shift to the opposing camp.

In practice, the aim of this legislation, and the US administration that supports it, is to bring Lebanon to its knees and — singling out as the weakest link – subjugate it in order to achieve three main goals.
First, to force the closure of the Syrian-Lebanese border to all commerce, and also to smuggling via the deployment of multinational troops, thus cutting off a lifeline for Syria given the embargoes and sanctions it already faces.

Secondly, to build up as much domestic pressure as possible in Lebanon for the resistance, specifically Hezbollah, to disarm: including by escalating sectarian tensions and encouraging the party’s opponents to mount street-protests against it. The US and its allies think they can generate a bigger and broader anti-Hezbollah backlash by making the lives of the Lebanese even more miserable and dealing a devastating blow to their economy and national currency.

A third goal is to browbeat the Lebanese authorities into negotiating a maritime boundary demarcation agreement with Israel on its terms, enabling it to appropriate as much Lebanese offshore oil and gas as possible.

But this legislation stands a no better chance of achieving its objectives — whether in Syria, Iran or Lebanon – than similar measures did in the past. It could indeed backfire, by inflaming extremism and extremists and spawning the emergence of radical groups that start targeting US and Western interests as happened in the 1970s and 80s. Excessive pressure causes explosions. Feelings are already at boiling point, and with the US behaving more arrogantly than ever, restraint cannot be sustained much longer.
Years of savage US sanctions on Iran ended up turning the country into a regional superpower. It was compelled to rely on its own resources and now sits atop a formidable arsenal of home-made made weaponry, including missiles, submarines, and drones. Sieges and sanctions are the mothers and fathers of the invention. Iran’s downing of a state-of-the-art American drone, it’s launching into the orbit of a satellite, and its despatch of five oil tankers to Venezuela — which the US didn’t dare intercept because it was scared of the consequences — are just a few examples of this.

The US now finds itself facing a raging popular uprising in protest against racism and the ‘deep state’, triggered by the police murder of Floyd George. This has made Trump go down in history as only the second president (after George Bush Jr. during the 9/11 attacks) to run down like a rabbit into the White House basement, fearing the presidential mansion might be over-run.

The US will not be the same after this upheaval, or after losing the first round of the new Cold War it launched against China (which could be called the Coronavirus War). Under the leadership of its clownish president, it goes from one domestic and foreign policy failure to another. It has lost much of its international authority and professed leadership, and is fast losing its domestic cohesion and ability to sustain its pretenses about equality and the American Dream. The sorcerer’s magic is turning well and truly against him.

Syria, having overcome the multinational conspiracy to tear it apart and destroy it as a state, will also overcome the Caesar Act. It is not in the business of surrendering. Nor will its allies in Lebanon raise the white flag and abandon their resistance to Israel or cede it their oil and gas.

0 thoughts on “Bringing Lebanon to its knees”