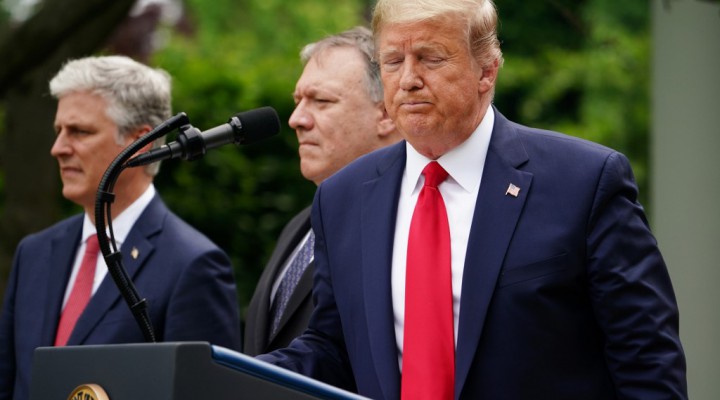 US President Donald Trump revealed his true intentions on Wednesday when he publicly refused to commit to a peaceful transfer of power should he lose the forthcoming elections. “We’re going to have to see what happens,” he said, adding “there won’t be a transfer, frankly, there’ll be a continuation”.

Trump wants to become president-for-life and effectively establish a dictatorship in the US not much different to those he claims to oppose in the rest of the world. Perhaps this explains his infatuation with Arab despots, especially the ruling families of the Gulf states.

Trump’s remarks do not only mean he will not necessarily accept the election results. They also amount to inciting sections of his base, white racists in particular, to take to the streets in violent protest if they don’t go his way and claim – as he has already predicted – they were rigged.

The 40 days separating us from the November 3 election will be critical not just for the US and its security, stability and unity but for the entire world. Because nobody can predict what this thug will get up to next.

The peaceful transfer of power, based on respecting the verdict of the ballot boxes, is the cornerstone of any democracy. Refusing to adhere to that principle is a recipe for anarchy, civil conflict, the collapse of the federal system and plunging the country into a sea of blood and chaos.

The level of social and racial tension in the US has never been higher and is continuing to rise. That is why more than 480 US national security leaders, led by retired Gen. Paul Selva — former vice-chairman of the joint chiefs of staff and one of Trump’s most senior military advisors – came out in support of Democratic nominee Joe Biden as the next president. They concurred that “the current President has demonstrated he is not equal to the enormous responsibilities of his office; he cannot rise to meet challenges large or small. Thanks to his disdainful attitude and his failures, our allies no longer trust or respect us, and our enemies no longer fear us.”

Trump is desperate. He feels more dejected and defeated than any previous American president has ever felt, and could lash out recklessly in any direction. Nobody can predict what disastrous steps he might decide to take next.

He does not fear losing credibility because he has none left. He has become despised the world over – including among some of the Gulf rulers who profess to adore him. In fact they shudder in fear of him: shovelling hundreds of billions of dollars his way in response of his dictates, and even selling out their national honour and self-respect by normalising relations with the Israeli occupation state to appease him.

The coming 40 days are particularly crucial for the Middle East, especially the Gulf states. The region could find itself being turned into the battleground of a war of mass destruction triggered by Trump against Iran – aimed at rallying his supporters behind him as a strong leader upholding America’s power and global leadership, or at creating an emergency to get the elections postponed.

The Washington Post has documented 20,000 proven lies made by Trump since he assumed office, including about 1,000 related to the coronavirus alone. Perhaps the most ominous of these were his recent tweets claiming Iran is just months away from producing nuclear weapons and vowing he will never allow that to happen.

The no-holds-barred attack on Iran voiced by Saudi Arabia’s King Salman in his recorded address to the UN General Assembly could be a pointer in this direction. He accused Iran of destabilising and terrorising the entire region and called on the world to unite against it, as though preparing public opinion for such a war and its consequences and for Saudi Arabia’s participation in one way or another.

Trump will use every means at his disposal to remain in the White House, and in this he has the enthusiastic support of Israeli Prime Minister Benjamin Netanyahu and his powerful network of pro-Zionist interest groups and their supporters in the US and elsewhere. He is hitting out it an all directions like a wounded beast. That may satisfy his urges and those of his racist supporters, but it could ultimately result in the destruction of the USA, just as Hitler caused the destruction and division of Germany and united most of the world against it.

Sounds apocalyptic? We can only wait and see.

0 thoughts on “An ‘October surprise’ against Iran?”