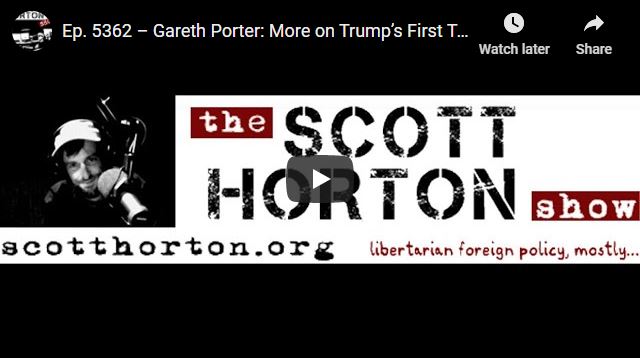 Porter focuses first on Iran, which has become the ultimate excuse for just about every foreign policy decision over the last decade.

In reality, of course, Iran is basically irrelevant to the security of the United States, and isn’t, says Porter, even much of a threat to America’s allies like Israel and Saudi Arabia.

But in the perception of the neocon establishment, Iran is the greatest enemy since Nazi Germany, and must be opposed at every turn no matter how destructive and quixotic the endeavor.

Porter and Scott then discuss Trump’s attitude toward China, where, unlike in the Middle East, he really does appear to have bought into all the hawkish propaganda. This hostility toward China has resulted, among other things, in the failure of the peace talks with North Korea, a process that Porter and Scott agree every sane person should have viewed as a good thing.