HOME / WORLD / Did John Bolton Light the Fuse of the UK-Iranian Tanker Crisis? 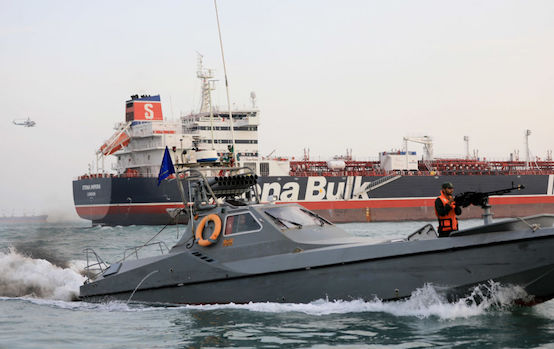 While Iran’s seizure of a British tanker near the Strait of Hormuz on Friday was a clear response to the British capture of an Iranian tanker in the Strait of Gibraltar on July 4, both the UK and U.S. governments are insisting that Iran’s operation was illegal while the British acted legally.

British Foreign Secretary Jeremy Hunt called the Iran seizure of the British-flagged tanker Stena Impero “unacceptable” and insisted that it is “essential that freedom of navigation is maintained and that all ships can move safely and freely in the region.”

But the British denied Iran that same freedom of navigation through the Strait of Gibraltar on July 4.

The rationale for detaining the Iranian vessel and its crew was that it was delivering oil to Syria in violation of EU sanctions. This was never questioned by Western news media. But a closer look reveals that the UK had no legal right to enforce those sanctions against that ship, and that it was a blatant violation of the clearly defined global rules that govern the passage of merchant ships through international straits.

The evidence also reveals that Bolton was actively involved in targeting the Grace 1 from the time it began its journey in May as part of the broader Trump administration campaign of “maximum pressure” on Iran.

Contrary to the official rationale, the detention of the Iranian tanker was not consistent with the 2012 EU regulation on sanctions against the Assad government in Syria. The EU Council regulation in question specifies in Article 35 that the sanctions were to apply only within the territory of EU member states, to a national or business entity or onboard an aircraft or vessel “under the jurisdiction of a member state.”

The UK government planned to claim that the Iranian ship was under British “jurisdiction” when it was passing through the Strait of Gibraltar to justify its seizure as legally consistent with the EU regulation. A maritime news outlet has reported that on July 3, the day before the seizure of the ship, the Gibraltar government, which has no control over its internal security or foreign affairs, issued a regulation to provide what it would claim as a legal pretext for the operation. The regulation gave the “chief minister” of the British the power to detain any ship if there were “reasonable grounds” to “suspect” that it had been or even that it was even “likely” to be in breach of EU regulations.

The notice required the Gibraltar government to detain any such ship for at least 72 hours if it entered “British Gibraltar Territorial Waters.” Significantly, however, the video statement by Gibraltar’s chief minister Fabian Picardo on July 4 explaining the seizure of the Grace 1 made no such claim and avoided any mention of the precise location of the ship when it was seized.

There is a good reason why the chief minister chose not to draw attention to the issue of the ship’s location: it is virtually impossible that the ship was in British Gibraltar territorial waters at any time before being boarded. The UK claims territorial waters of three nautical miles from its coast, whereas the Strait of Gibraltar is 7.5 nautical miles wide at its narrowest point. That would make the limit of UK territory just north of the middle of the Strait.

But international straits must have clearly defined and separated shipping lanes going in different directions. The Grace 1 was in the shipping lane heading east toward the Mediterranean, which is south of the lane for ships heading west toward the Atlantic and thus clearly closer to the coast of Morocco than to the coast of Gibraltar, as can be seen from this live view of typical ship traffic through the strait. So it is quite implausible that the Grace 1 strayed out of its shipping lane into British territorial waters at any time before it was boarded.

But even if the ship had done so, that would not have given the UK  “jurisdiction” over the Grace 1 and allowed it to legally seize the ship. Such a move clearly violates the global treaty governing the issue—the United Nations Convention on the Law of the Sea. Articles 37 through 44 of that agreement, ratified by 167 states, including the UK and the European Union, establish a “regime of transit passage” for international straits like the Strait of Gibraltar that guarantees freedom of navigation for merchant ships. The rules of that regime explicitly forbid states bordering the strait from interfering with the transit passage of a merchant ship, with very narrowly defined exceptions.

These articles allow coastal states to adopt regulations relating to safety of navigation, pollution control, prevention of fishing, and “loading or unloading any commodity in contravention of customs, fiscal, immigration  or sanitary laws and regulations” of bordering states—but for no other reason. The British seizure and detention of the Grace 1 was clearly not related to any of these concerns and thus a violation of the treaty.

The evidence indicates, moreover, that the UK’s actions were part of a broader scheme coordinated with the Trump administration to tighten pressure on Iran’s economy by reducing Iran’s ability to export goods.

The statement by Gibraltar’s chief minister said the decision to seize the ship was taken after the receipt of “information” that provided “reasonable grounds” for suspicion that it was carrying oil destined for Syria’s Banyas refinery. That suggested the intelligence had come from a government that neither he nor the British wished to reveal.

Detailed evidence of Bolton deep involvement in the British plan to seize the Iranian tanker has surfaced in reporting on the withdrawal of Panamanian flag status for the Grace 1.

Panama was the flag state for many of the Iranian-owned vessels carrying various items exported by Iran. But when the Trump administration reinstated economic sanctions against Iran in October 2018, it included prohibitions on industry services such as insurance and reinsurance. This decision was accompanied by political pressure on Panama to withdraw Panamanian flag status from 59 Iranian vessels, many of which were owned by Iranian state-affiliated companies. Without such flag status, the Iranian-owned vessels could not get insurance for shipments by freighter.

That move was aimed at discouraging ports, canal operators, and private firms from allowing Iranian tankers to use their facilities. The State Department’s Brian Hook, who is in charge of the sanctions, warned those entities last November that the Trump administration believed they would be responsible for the costs of an accident involving a self-insured Iranian tanker.

But the Grace 1 was special case, because it still had Panamanian flag status when it began its long journey around the Southern tip of Africa on the way to the Mediterranean. That trip began in late May, according to Automatic Identification System data cited by Riviera Maritime Media. It was no coincidence that the Panamanian Maritime Authority delisted the Grace 1 on May 29—just as the ship was beginning its journey. That decision came immediately after Panama’s National Security Council issued an alert claiming that the Iranian-owned tanker “may be participating in terrorism financing in supporting the destabilization activities of some regimes led by terrorist groups.”

The Panamanian body did not cite any evidence that the Grace 1 had ever been linked to terrorism.

The role of Panama’s National Security Council signaled Bolton’s hand, since he would have been the point of contact with that body. The result of his maneuvering was to leave the Grace 1 without the protection of flag status necessary to sail or visit a port in the middle of its journey. This in conjunction with the British seizure of the ship was yet another episode in the extraordinary American effort to deprive Iran of the most basic sovereign right to participate in the global economy.

Now that Iran has detained a British ship in order to force the UK to release the Grace 1, the British Foreign Ministry will claim that its seizure of the Iranian ship was entirely legitimate. The actual facts, however, put that charge under serious suspicion.

0 thoughts on “Did John Bolton Light the Fuse of the UK-Iranian Tanker Crisis?”