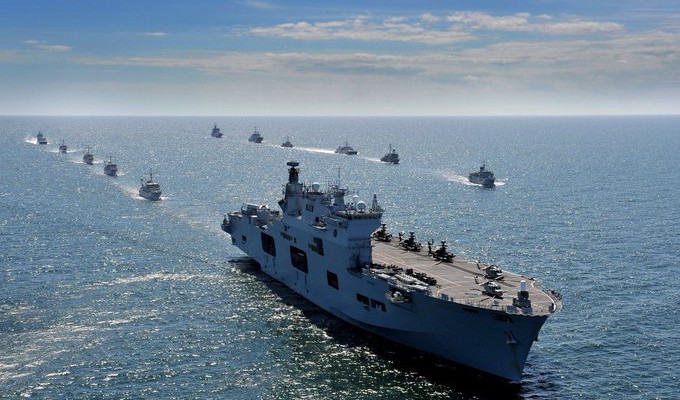 The US and Britain are adding more fuel to the potential bonfire by sending more warships to the Persian Gulf. If the Trump administration and the hapless British government want to avoid a war, as they say they do, then they must reciprocate with Iran towards a negotiated peaceful resolution.

Britain is sending more warships to the Persian Gulf, accusing Iran of “hostile acts” after a British-flagged tanker was seized by Iranian forces last week. Joining the British naval fleet is one its newest Astute-Class nuclear-powered submarines, according to UK media.

London condemned the Iranian interception of the Stena Impero cargo ship last Friday, and has said its increased presence of warships in the Gulf is to “protect freedom of navigation” for commercial shipping. Britain is expected to link up with a US-led naval coalition that Washington is currently organizing for deployment in the region.

Iran released video footage of its elite commandoes abseiling on to the British vessel from helicopter. The Stena Impero was then impounded at the Iranian port of Bandar Abbas in the Strait of Hormuz. Tehran claims the tanker was involved in a collision with a fishing boat and that it refused to abide by safety regulations. Iran is conducting an investigation and has detained the crew of mainly Indian nationals.

British protests over Iran’s “unacceptable” detention of the tanker sound rather hollow, if not hypocritical. Currently, an Iran oil tanker, Grace 1, is being detained in the British overseas territory of Gibraltar after being seized by Royal Navy commandoes on July 4. London claims it is enforcing sanctions against Syria by commandeering the Iranian tanker containing 2 million barrels of oil, allegedly on the way to Syria. Iran rebuffs the British claims and has denounced the seizure off Gibraltar as an “act of piracy”.

Iranian Supreme Leader Ayatollah Khamenei had vowed that Iran would retaliate over the Gibraltar incident. Now it looks as if Iran has done just that with the seizure of the British vessel. Britain’s charges that Iran “violated international law” can be plausibly reciprocated by Iran’s counter-charges about the British detention of its oil tanker.

The dramatic descent from helicopter by Iranian special forces on to the Stena Impero and subsequent impounding of the ship is a direct reciprocation of how British marines apprehended the Iranian tanker off Gibraltar. It seems the Iranians deliberately mirrored the earlier British operation to demonstrate parity of action.

So this game of reciprocation can go both ways. The British and the Americans can keep piling up military forces in the Persian Gulf – as they have been doing since May. Britain’s reported dispatch of a nuclear submarine and more frigates to the congested waterway is bound to dangerously raise the stakes, where a miscalculation or skirmish could spiral towards a disastrous full-on military confrontation.

Iran is not going to back down. It has repeatedly warned that it will hit back with force if its territorial boundaries and interests are attacked. Every ratcheting-up of military force by Britain and the US will be met with reciprocal measures by Iran. Seize one of our ships, we’ll seize one of yours. Fly a spy drone into our airspace, we’ll shoot it down. And so on.

What makes the situation all the more precarious is we have a US president who is an egotistical buffoon. His erratic administration is ill-advised and directed by arrogant war-crazies like Vietnam-draft-dodger John Bolton. Moreover, the British government is in crisis over its Brexit farce. Nobody seems to be in charge of Downing Street with several ministers this week handing in their resignation in anticipation of bumbling Boris Johnson becoming the new prime minister. Of most concern is that London is liable to be even more sycophantic – than it usually is – to the Trump administration because London needs to keep Washington sweet for availing of post-Brexit trade lifelines.

That means if Trump says “jump” to Britain, the British bulldog will say, “how high?”. With regard to the mounting Persian Gulf crisis that means any reckless American aggression towards Iran is likely to be further compounded by London’s servility to likewise oblige with further provocation towards Tehran. The dynamic of recent events already illustrates that.

However, reciprocation can also work in reverse, towards a peaceful resolution, if sanity prevails. Iran has said it does not want war, and has offered a negotiated path to de-escalate. Tehran has called on the Trump administration to lift sanctions and abide by diplomatic norms for dialogue. Iran wants the international nuclear deal signed in July 2015 to be respected by all parties and for trade and diplomatic relations to be normalized, as mandated by the UN-endorsed accord.

In short, Iran is offering reciprocation towards normal international relations. The onus is very much on the US and the Europeans to abide by the nuclear deal. Trump’s unilateral withdrawal of the accord last year was the first step towards reciprocal hostility.

The US and Britain are adding more fuel to the potential bonfire by sending more warships to the Persian Gulf. Such a move is ludicrous, hurtling towards disaster. If the Trump administration and the hapless British government want to avoid a war, as they say they do, then they must reciprocate with Iran towards a negotiated peaceful resolution. It can be feasibly done, in theory. But it requires Washington and London respecting Iran’s sovereignty and rights. That’s a debatable ask off Anglo-American arrogance.

0 thoughts on “Gulf Crisis: Reciprocation Towards Disaster or Peaceful Resolution?”