HOME / WORLD / Pirates of the Mediterranean 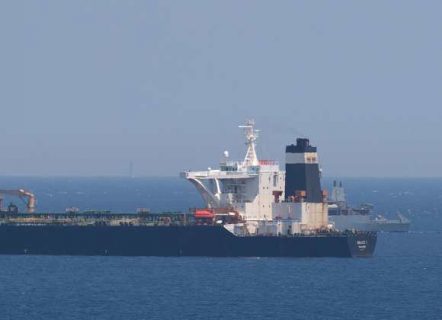 Was the UK’s tanker seizure in the Strait of Gibraltar targeted at Syria or Iran?

The seizure by British forces of a Panama-flagged tanker in the Strait of Gibraltar carrying Iranian oil to Syria is a serious act of escalation that will further raise tensions in the already ultra-tense Gulf region.

The UK government claims the move was merely aimed at enforcing the sanctions imposed on Syria by the European Union (EU) after the civil war broke out in 2011, which include a ban on energy supplies. The official line is that the authorities in Gibraltar suspected that the ship was bound for the Syrian port of Banyas, so intercepted it when it entered the tiny British colony’s territorial waters, with the ‘assistance’ of Royal Marine commandos who mounted a helicopter-borne raid on the vessel.

But Spanish Foreign Minister Josep Borrell blew that cover when he revealed that the raid was pre-planned and carried out at the request of the United States, allegedly in violation of Spain’s sovereignty. While the tanker’s documentation claimed its 300,000-ton cargo originated in Iraq, the US determined it was Iranian crude oil that had been loaded at an Iranian port. Although the UK insists it does not comply with Washington’s oil embargo on Iran, this was clearly what prompted the raid.

The EU ban on oil deliveries to Syria has never previously been enforced on third parties in this aggressive manner. In any case, the sanctions long ago ceased to serve the purpose they were designed to achieve. They were adopted at a time when the UK government was openly seeking regime-change in Syria. But that is no longer on the cards now that the regime has regained control of most of the country from Western- and Gulf-backed armed groups. The only thing achieved by preventing the country from importing oil is to make life more miserable for its 17 million citizens who are suffering severe electricity and fuel shortages, causing queues several kilometres long outside petrol stations. How does this square with the declared purpose of the EU sanctions, namely to safeguard the civilian population from regime repression?

The raid would have been understandable in that context if the ship had been loaded with weapons. But to prevent the delivery of desperately needed fuel only exposes the hypocrisy of the EU claim to be prioritising human rights in Syria. The oil supply ban may be part of a cynical ploy to foment further opposition to the regime due to ever worsening living conditions. But it is just as likely to backfire on the Europeans by making more Syrians despair of the situation under sanctions and seek to flee their country for European shores. Moreover, these are unilateral EU sanctions not endorsed by the UN, so third countries are not bound by them.

Curiously, the US and EU countries, which deployed their air forces in Syria and Iraq in the name of combating terror, never intercepted the oil shipments made by the Islamic State (IS) group. For years, it used to earn three million dollars a day from trucking fuel, via various middlemen and go-betweens, to Turkey, Iraqi Kurdistan and even government-controlled parts of Syria.

British officials claim the fact that the intercepted tanker took the circuitous route around Africa to deliver its cargo to Syria, rather than going through the much shorter Suez Canal route, as evidence that its activities were ‘suspicious’. But this is disingenuous. Tankers of this size are too large to transit the Suez Canal. And in any case, the Egyptian authorities do not allow Syria-bound fuel cargoes to use the waterway in compliance with EU sanctions, even though Egypt is not bound by them. A case of being more royalist than the king, and of collusion against a fellow Arab country facing a ruinous war and conspiracies to dismember it, which sums up the sorry state of the Arab world these days.

With regard to Iran, the British move also smacks of hypocrisy and destroys any remaining diplomatic credibility the UK had left. Ever since US President Donald Trump scrapped the JCPOA Iran nuclear agreement, London has tried to persuade Tehran to continue adhering to it. It has promised not to abide by renewed American sanctions – especially the US bid to block all Iranian oil exports — and even to help Iran circumvent them. How does this square with the use of military force to intercept a shipment of Iranian crude? How can Iran now be expected not to cease complying with the JCPOA itself, as it has repeatedly threatened, or to abandon any hope of achieving a negotiated solution with the US? Iran will certainly not take what it has termed Britain’s act of ‘piracy’ in the Mediterranean lying down. One senior official even suggested that a British tanker might be seized in the Gulf to force the release of the ship detained in Gibraltar.

One wonders how much the UK government — preoccupied with Brexit and domestic power-struggles — thought through the implications, either with regard to Syria or Iran, when it ordered this move. Was it merely an act of knee-jerk obedience to instructions from Washington, regardless of the political or human consequences, or a calculated contribution to the escalation of tensions in the Middle East?

0 thoughts on “Pirates of the Mediterranean”