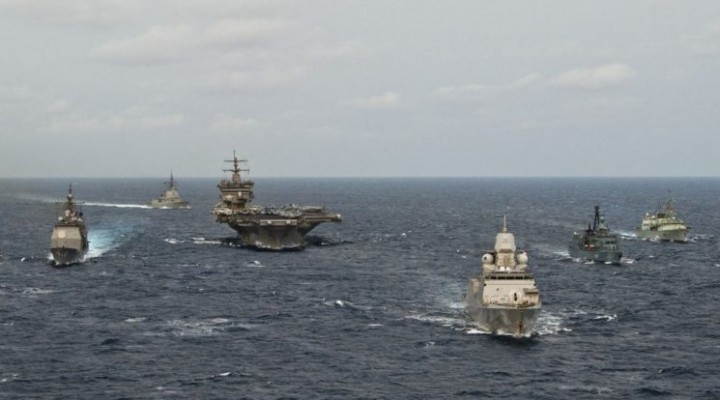 It seems that the Americans and British carried out the seizure operation not for the purpose of enforcing EU sanctions against Syria per se, but rather to simply antagonize Iran. Iran will have little choice other than to walk away from the nuclear treaty.

The seizure of two million barrels of Iranian crude oil by British commandoes is a blatant act of piracy aimed at provoking Iran into war. Also, confiscation of the supertanker in Britain’s Mediterranean territory of Gibraltar seems aimed at sinking the last chances for the international nuclear accord being upheld.

Iran has already warned it will suspend parts of the Joint Comprehensive Plan of Action (JCPOA) by increasing stockpiles of enriched uranium, particularly because Tehran has rebuked the European Union for not doing enough to implement the 2015 accord and normalize trade with Iran, circumventing US sanctions.

Following the G20 summit in Japan at the end of last month, the Europeans appeared to stiffen their resolve to finally set up a trading mechanism with Iran (known as Instex) which would avoid US sanctions.

The timing of the latest capture of Iranian crude oil at sea by British special forces – and the indication they were colluding with American intelligence – will serve to sabotage any trust in Tehran that the Europeans can deliver on promises, thereby prompting Iran to crash out of the nuclear accord.

Britain claims that its Royal Marines commandeered the supertanker ferrying the Iranian-owned cargo in order to enforce EU sanctions on Syria. Those EU sanctions have been in place since 2014 based on tenuous claims that the Syrian government is repressing its people with war (a war started covertly by US and NATO-backed proxies.)

In any case, the 330-meter Grace 1 vessel, loaded with crude oil worth an estimated $120 million, was boarded Thursday early morning under cover of darkness by dozens of British commandoes from helicopters and speed boats while it was transiting the Gibraltar Strait, the western opening of the Mediterranean Sea.

The crew were mainly Indian and Pakistani seamen, and the ship is reportedly Panamanian-flagged and owned by a Singaporean company. But the lucrative cargo is Iran’s. Iran has responded furiously, denouncing the British action as “piracy”. A former chief of the Iran’s Islamic Revolutionary Guard Corps urged retaliation by confiscating a British vessel.

There is a strong sense that this tit-for-tat escalation is exactly what the Americans and British are trying to orchestrate so as to create a pretext for armed conflict with Iran.

Russia quickly condemned the British seizure of the Iranian oil tanker as a reckless provocation to deliberately inflame tensions, carried out in cahoots with Washington.

John Bolton, President Trump’s hawkish national security advisor, gloated that the British operation was “excellent news”. Trump himself warned that Iran should be “very, very careful” about how it responds to the incident. That anticipatory reaction suggests the event was a planned provocation.

It follows several previous incidents of apparent false-flag attacks on oil tankers near the Persian Gulf which have been blamed on Iran by Bolton and other US officials. At the end of last month, a US spy drone was shot down by Iran after it breached the country’s territory. That incident nearly launched an American air strike “in response” which was cancelled by Trump at the last minute.

Now the provocation has taken it up a notch with the actual seizure of Iranian property and a badly needed source of export revenue for the sanctioned country.

The British government claims that the seizure of Iranian oil was authorized by the Gibraltar authorities. London says its Royal Marines were dispatched as back up for Gibraltar police to apprehend the tanker in order to enforce EU sanctions on Syria, where the oil was reportedly destined for.

The British version stretches credulity. The planning of such a risky operation would have had to require lengthy logistics. It would not have been something the tiny territory of Gibraltar could initiate. Moreover, Spain’s government, which is in historic dispute with Britain over ownership of Gibraltar, has claimed that Britain was acting on US intelligence.

If Iran goes ahead and confiscates a British vessel in retaliation, then the escalation game goes into heightened danger levels. Such a move could provide the war cause that anti-Iran hawks want.

The British are showing themselves to be the loyal warmongering accomplice that they are for Washington. London is also showing its notorious perfidy and black art of deception. After all, Britain is supposed to be supporting the international nuclear accord along with other European powers.

The European Union executive in Brussels does not appear to have been involved or notified of the British operation to interdict the Iranian crude oil. If the action was allegedly to enforce EU sanctions against Syria, why wasn’t Brussels in the loop?

It seems that the Americans and British carried out the seizure operation not for the purpose of enforcing EU sanctions against Syria per se, but rather to simply antagonize Iran. In addition, the putative responsibility of EU sanctions, as claimed by the British and Americans, will have the effect of demolishing any confidence in Tehran that the Europeans can act independently from Washington to uphold the nuclear deal.

Iran will have little choice other than to walk away from the nuclear treaty. The Americans can then self-justify ratcheting up secondary sanctions to cut off all global exports of Iranian oil. Choking off Iran’s lifeline exports to “zero” is what the Trump administration has repeatedly bragged about.

It’s hard to see how this relentless, criminal provocation of Iran will not lead to war.