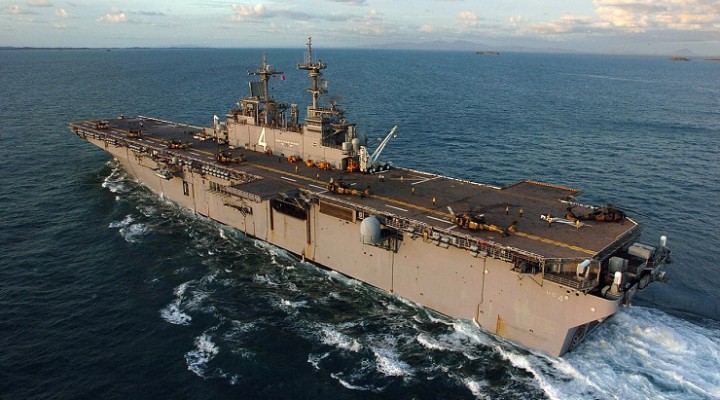 The US boasted of downing an Iranian drone over the Strait of Hormuz, admittedly in international waters, just miles off Iran’s coast, and thousands of miles from Washington.

It claims the drone was “threatening” a US amphibious assault ship, the USS Boxer.

The Washington Post in its article, “Trump says the U.S. Navy downed an Iranian drone in the Strait of Hormuz,” would claim:

A U.S. naval ship downed an Iranian drone that flew too close and ignored multiple calls to turn away, President Trump said Thursday, as tensions between the United States and Iran appeared to be rising once again in the Persian Gulf region.

Speaking at the White House, Trump said the drone came within 1,000 yards of the USS Boxer in the Strait of Hormuz before the crew “took defensive action” and “immediately destroyed” it.

The Pentagon said the incident happened at 10 am local time on Thursday in international waters while the Boxer was transiting the waterway to enter the Persian Gulf. The Boxer is one of several US naval ships in the area, including the USS Abraham Lincoln, an aircraft carrier that has been operating in the nearby North Arabian Sea for weeks.

The claims come nearly a month after Iran shot down a US drone – an RQ-4A Global Hawk – operating near Iranian shores, also in the Strait of Hormuz.

A 2009 Brookings Institution paper titled, “Which Path to Persia? Options for a New American Strategy toward Iran,” would openly admit (emphasis added):

Apparently, the US is no longer concerned about whether or not the world recognizes this game and is doing everything in its power to goad Iran into miscalculating and granting the US justification for a long-desired and much larger conflict with Tehran.

As with most deliberate provocations – the recent US claims of downing an Iranian drone came with minimum details and no evidence at all. Not even the type of drone was mentioned by the Washington Post or AP.

Claims that the drone came within 1,000 yards of the ship and was disabled through electronic jamming indicates it was most likely an off-the-shelf drone used for photography and in no way posed a threat to the USS Boxer.

Iranian media – for its part – claims the US most likely shot down their own drone, and denies Iran was operating any of its own drones in the area at the time. Iran’s PressTV in an article titled, “US may have shot down own drone in Persian Gulf, Iran says of Trump’s claim,” would claim:

Iran has rejected US President Donald Trump’s claim that a US warship had shot down an Iranian Unmanned Aerial System (UAS) in the Strait of Hormuz.

“We have not lost any drone in the Strait of Hormuz nor anywhere else,” Iranian Deputy Foreign Minister Seyyed Abbas Araqchi said in a tweet on Friday.

“I am worried that USS Boxer has shot down their own UAS by mistake!”

What is certain is that even if it were an Iranian drone, it couldn’t have posed more of a threat to the USS Boxer than America’s military presence in the Middle East poses to its inhabitants – a region where the US has repeatedly bombed, invaded, currently occupies or is waging war by proxy against multiple nations including Iraq, Syria, Lebanon, Yemen, and indeed – Iran itself.

Beyond the Middle East the US has left Libya desolate and is currently occupying the Central Asian nation of Afghanistan – a military campaign that has lasted now nearly 2 decades and is unfolding along Iran’s eastern border while the US continues to maintain a military presence in Iraq on Iran’s western border.

The US currently maintains crippling sanctions against Iran, admittedly sponsors terrorist groups operating within Iran, and has repeatedly threatened to overthrow the Iranian government through open military intervention, US-sponsored “color revolutions,” as well as economic and covert military means.

The UK – equally committed to Washington’s desire to overthrow the Iranian government – has even recently hijacked an Iranian tanker in the Strait of Gibraltar.

Under ordinary circumstances, a military drone approaching a ship of any kind from any nation in international waters – allegedly as close as 1,000 yards – would be considered a provocation. But Iranian drones – if this was indeed the case – approaching a US warship plying the waters of a region utterly ravaged by US military aggression can at best be considered scrutiny the US has earned itself through its own destructive foreign policy – a foreign policy that fully intends to visit the same destruction brought upon nations like Yemen, Iraq, Syria, Libya, and Afghanistan – upon Iran as well.

There is a much easier solution for the US if its goal really is to ensure the safety of its vessels travelling the globe – stop provoking conflict, thus eliminating the chances of its vessels becoming targets during such conflict.

Of course, the US will not do this. It will continue pursuing hegemonic foreign policy until it is economically and militarily no longer able to do so. For Iran – the trick will be avoiding provocations designed to trigger a war the US still believes it can win until global dynamics change enough to ensure whatever war the US triggers it will have no chance of winning.