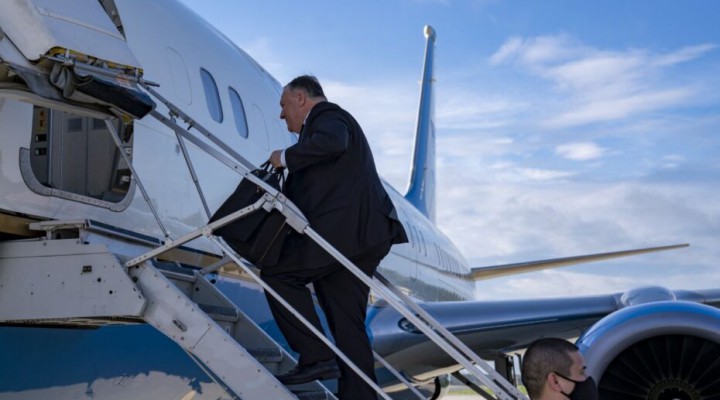 As Joe Biden secured his overwhelming electoral victory over Donald Trump, Secretary of State Mike Pompeo set out on a seven-nation trip that had no apparent purpose

As Joe Biden secured his overwhelming electoral victory over Donald Trump, Secretary of State Mike Pompeo set out on a seven-nation trip that had no apparent purpose. Even though Pompeo had earlier declared at a State Department press conference that he was preparing for a “smooth transition to a second Trump administration,” a figment of his gluttonous imagination, his trip to France, Turkey, Georgia, Israel, Qatar, Saudi Arabia, and the United Arab Emirates defied logic.

Every single leader of the nations on Pompeo’s itinerary had congratulated Biden on his election as the 46th President of the United States. Pompeo had earlier offered the leadership of each of the nations he was visiting some thinly-veiled criticism over their decision to congratulate Biden. Pompeo said, “make no mistake about it: We have one president, one secretary of state, one national security team at a time.” Pompeo’s comments were unprecedented as previous lame duck administrations never had any problem with the president-elect or his transition team accepting congratulations or phone calls with foreign leaders. The Trump-to-Biden transition will go down in the history books as one of the most contentious in history, even surpassing the 1932-1933 transition from Republican Herbert Hoover to Democrat Franklin D. Roosevelt.

The Trump White House even decided to bar Biden and his Transition Team from receiving federal government office space and other services. The Trump-appointed political lackey in charge of the General Services Administration, Emily Murphy, failed to officially “ascertain” that Biden was the president-elect, a violation of the 1963 Presidential Transition Act.

Pompeo also decided to block Biden and Vice President-elect Kamala Harris from accessing scores of official congratulatory messages received via U.S. diplomatic channels from foreign leaders. In the past, the State Department Operations Center has provided translations for such messages as well as responses from the President and Vice President-elect to the foreign leaders. With Pompeo and his loyalists sitting on the correspondence, many leaders were forced to issue their informal congratulations on Twitter and Facebook.

Pompeo’s foreign jaunt during the interregnum between Trump and Biden appears to be an effort to collect as many photographs as possible depicting Pompeo with leaders like French President Emmanuel Macron, Israeli Prime Minister Binyamin Netanyahu, and Saudi Crown Prince Mohammed bin Salman to burnish Pompeo’s expected 2024 presidential campaign website.

In an unusual statement regarding Pompeo’s visit to Paris, the French President’s office stated in an official press release that Macron’s discussions with Pompeo would be with “complete transparency towards the team of president-elect Joe Biden.”

Pompeo was not scheduled to meet with Turkish President Recep Tayyip Erdogan but, instead, met in Istanbul with Patriarch Bartholomew I of Constantinople, the Greek Orthodox leader. Pompeo was also on tap to visit an illegal Israeli settlement in the West Bank and the Golan Heights, Israeli sovereignty over which was recognized by the Trump administration. In Georgia, Pompeo scheduled a meeting with Ilia II, the Patriarch of the Georgian Orthodox Church. Pompeo’s entire itinerary was meant to appeal to Christian pro-Israel evangelicals in the United States with a political eye toward the 2024 race, which is also expected to draw in as presidential candidates, Vice President Mike Pence, former South Carolina Governor and U.S. ambassador to the United Nations Nikki Haley and, reportedly, Donald Trump. All of the prospective candidates are vying for the votes of the religious right.

Pompeo’s refusal to travel to Ankara to meet with Erdogan, Foreign Minister Mevlut Cavusoglu, and other Turkish government officials was viewed as a snub to the Turkish government, which recently restored Istanbul’s Hagia Sophia, the former Christian Holy See of the Byzantine Empire, to a fully-functioning mosque. That move was condemned by Patriarch Bartholomew and other Orthodox Christian leaders around the world. Pompeo is a devout member of the Evangelical Presbyterian Church, which adheres to an extremist Dominionist view that champions Christian supremacy.

The Trump-to-Biden transition appears to be heading in the direction of the most acrimonious in U.S. history, being even worse than that of President John Adams to President-elect Thomas Jefferson in 1801, Hoover to FDR in 1932 and 1933, and President Harry S Truman to President-elect Dwight D. Eisenhower in 1952. As bad as the blood was between Adams and Jefferson, Hoover and FDR, and Truman and Eisenhower, none of the outgoing presidents barred the State Department from briefing the presidents-elect.

Vice President Jefferson –  who defeated his boss, Adams, for re-election –  had been involved in a bitter presidential campaign. Adams’s supporters all but called Jefferson an agent for French revolutionary forces and Jefferson backers claimed that the pro-British Adams wanted to hand America back to the British monarchy. Adams skipped Jefferson’s 1801 inauguration, choosing to slip quietly out of Washington by stagecoach and head to his home in Massachusetts. There is speculation that Trump will not attend Biden’s inauguration. Whatever course Trump decides upon, unlike Adams, the departure of Trump from the White House will be anything but quiet and low key. President John Quincy Adams declined to attend the inauguration of his successor, Andrew Jackson and Andrew Johnson skipped the inauguration of his successor, Ulysses S. Grant. In 1837, it was President Martin Van Buren who established the tradition of riding with the departing incumbent president, in his case, President Jackson, from the White House to the U.S. Capitol for the swearing-in ceremony.

President Hoover, who was defeated for re-election by FDR, held a meeting with the Democratic president-elect on November 22, 1932. Hoover, who was trounced by FDR in an election held amidst the Great Depression, believed that he and FDR should jointly tackle some major issues during the forthcoming Roosevelt administration, particularly foreign debt owed to the United States from World War I and the state of the global economy. FDR had his own ideas of what was necessary to pull the United States out of the depths of the Depression and dismissed any proposals from Hoover, who the president-elect believed contributed to the stock market crash and its aftermath. Hoover and FDR did generally agree on the need for America to deal with the debt defaults of Britain, France, and other countries to the U.S. Furthermore, FDR met with Hoover’s Secretary of State Henry L. Stimson – who would later serve as FDR’s Secretary of War – and agreed to jointly denounce Japan’s seizure of Manchuria. After their January 1932 meeting, FDR told Stimson, “We are getting so that we do pretty good teamwork, don’t we?” Compared to the current Trump-Biden transition, that of Hoover to FDR, cited by historians as one of the worst in history, is exemplary.

The other contentious modern-era presidential transition, between Truman and Eisenhower, was, compared to that of Trump to Biden, relatively successful. Truman authorized Eisenhower transition representatives Joseph Dodge office space in the Old Executive Office Building, next to the White House and Henry Cabot Lodge to receive top-level briefings from the Departments of State and Defense. The one thing that separates presidents like Hoover, FDR, Truman, Eisenhower, and other presidents from Trump is intellectual maturity. Truman told aides that despite his anger over the rhetoric heaped on him by the Eisenhower campaign in 1952, he recalled how unprepared he was as Vice President to assume the presidency when FDR died in 1945. Truman did not want Eisenhower to suffer the same fate.

Pompeo’s 2024 presidential campaign overseas trip and Trump’s transition tantrums will go down in history as emblematic of the widespread corruption and immaturity of the one-term Trump administration.