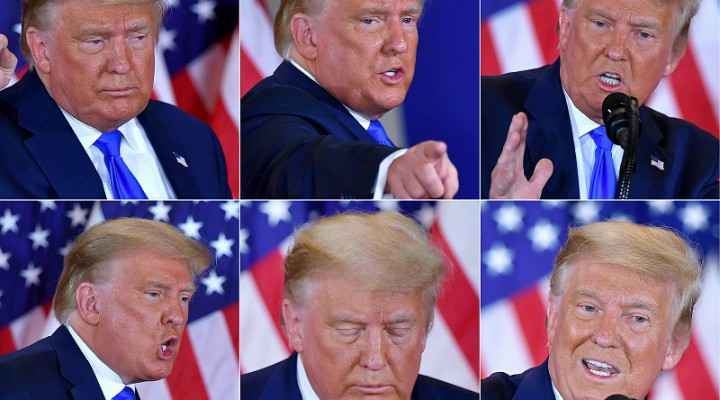 … for accelerating the decline of the USA as a global power

For the past half-century or more, most administrations in Washington have taken action to change regimes that oppose US political or military hegemony and even to redraw national borders, whether by the military, political or economic means. The USA now seems to be getting a self-administered dose of its own medicine. Change is coming to America, in terms both of its national identity and domestic politics and its status as a global superpower. And it is changed for the worse.

The peaceful transfer of power after elections was the bedrock of the US political system and one of the proudest achievements of Western-style democracy. This concept is now being called into question and might end up being completely abandoned, and along with it, the hopes of all regimes in the Middle East and elsewhere who bank on American protection. The consequences for global security and stability could be huge.

When a presidential candidate declares victory before votes have even been counted and threaten to go to the Supreme Court to uphold that claim, the extent of the problem becomes clear. This precedent could be followed by others that are even more serious, leaving us with a very different America to the one we have known and from whose policies and injustices we have suffered.

Gorbachev brought down the Soviet Union with his Perestroika policy which amounted in practice to an admission of defeat by the West. Trump is doing the same and — while proclaiming greatness, power and victory — leading the US and its people into a similarly precipitous decline.

Welcome to the ‘emirate’ or ‘sheikhdom’ of Donald Trump, which he began establishing under the inspiration of his friends in the Middle East where anarchy, failed states, corruption, autocracy and militia rule prevail. Some thought he might imbue those friends with democratic values and practices. But as we can see from current developments, the exact opposite happened.

Who would have imagined seeing hordes of white racist extremists, inspired by their charismatic leader, patrolling the streets of American cities in armoured vehicles to intimidate their Democrat and non-white opponents? Or empty shelves in US gun stores after they sold 20 million weapons in the past few months alone (helping explain Trump’s pandering to the Gun Lobby and refusal to change related laws)?

The USA, which held itself up as a paragon of equality and coexistence between different ethnicities and religions enjoying strict legal protection, is sliding to the brink of civil war and racial and regional conflict. The credit for that must go to President Trump and his power-lust, authoritarianism, arrogance, extortion and super-charged self-regard.

He, therefore, deserves the gratitude of countless numbers of people around the world who have suffered and still suffer from the oppression, injustice and carnage wreaked on them by a state that is in the process of losing its power and greatness. The decline of the USA may signal the start of our renaissance and the beginning of the end of our multiple crises.

0 thoughts on “Thank you, President Trump”