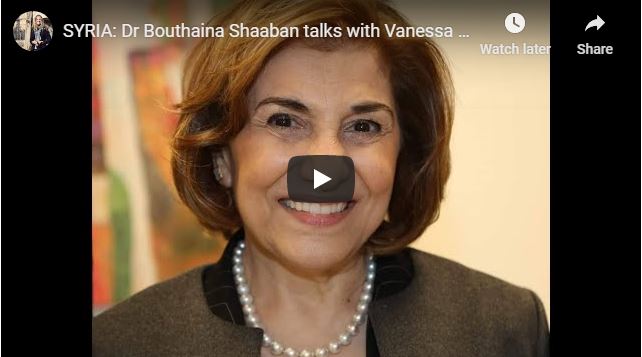 Dr Bouthaina Shaaban on the hybrid war strategy being waged by the West, Israel, Turkey, Gulf States against Syria and her allies.

We had a meeting, during which we discussed most aspects of the maximum pressure campaign the sado-barbaric US Coalition is imposing upon Syria and all the nations who would defend her or provide economic support, trade and military collaboration.

Covid19 was discussed and the deliberate westernization of this alleged “pandemic” to further tighten the screws on an already economically devastated country that has endured 10 years of war, plagued by the various terrorist gangs created, financed and armed by the US Coalition in order to overthrow the Syrian government and to convert Syria into another satellite vassal state, ready to comply with the US Coalition globalist agenda in the region.

We discussed the imminent Caesar Law that will come into effect on the 17 th June 2020 – increasing pressure upon Syria’s allies and intended to prevent any assistance being given to Syria to rebuild and to restore after the externally fomented war is finally won and the US Coaliton proxies driven from this land.

Dr Shaaban is the political and media advisor to the President of Syria, Dr Bashar Al Assad. Bouthaina’s experience in politics and the history of her country spans decades. Her patriotism and love of her homeland is inspirational. This is a powerful woman at the center of Syrian resistance, one who has never abandoned her belief in the sacred sovereignty of this noble nation.

I hope Dr Shaaban won’t mind my telling one story that, for me, epitomises the spirit and humility of this ambassador for peace and evolution in the chaotic world we live in. On a trip to Khan Sheikhoun, Idlib, just after liberation, Dr Shaaban’s car passed a number of Syrian Arab Army soldiers at a checkpoint. They saluted. Dr Shaaban asked the car to turn around. She got out of the car and went up to the soldiers. “It is I who should be saluting you”, she told them and she raised her hand in salute to the liberators of Syrian soil – every inch.

I hope you enjoy listening to Dr Bouthaina Shaaban, I always come away from our meetings feeling that Syria will never capitulate to US supremacy and that Syria and her steadfast allies will be victorious in the end, heralding a better future for all of us.

In my opinion, US Coalition media, UN agencies and all manner of “regime change” so-called NGOs funded by the US Coalition have fought to silence the Syrian voices of the intelligent, patriotic and intellect-challenging individuals who are all ambassadors for Syria from one perspective or another – why? Because these voices demonstrate categorically that the West’s moral compass is broken, that we have no statesmen anymore, our governments are embedded in for-profit constructs, including the military and Pharmaceutical sectors – their speech is based on falsehood, their agenda is destruction, not global progress, war not peace, devastation not construction, hatred not love and racism not unity. I know who I would rather listen to and learn from. The West teaches us only fear, oppression and neo-colonialist aggression.

Below are a few other interviews with Dr Shaaban that I have had the honour to participate in since I have been coming to Syria.

My article for Mint Press News on the maximum pressure campaign. I will shortly be publishing an update on the hybrid war strategy in Syria.