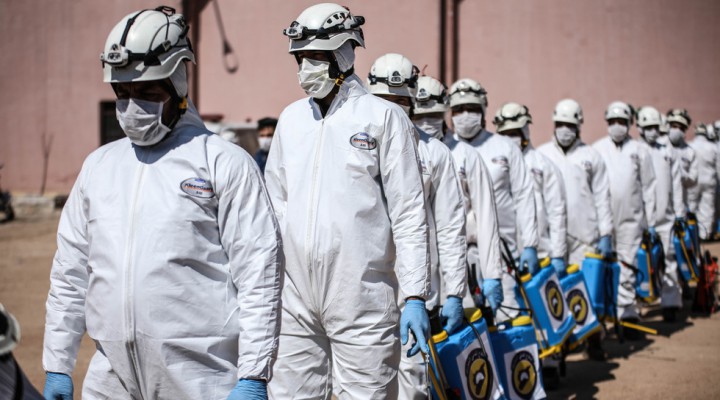 The White Helmet ‘coronavirus campaign’ is a cynical exploitation of the pandemic to weaponize it against the Syrian government. To really help the Syrians they should demand a lift of Western sanctions, not support them.

Five cases of coronavirus have now been reported by the health ministry in Syria. The country is subject to a curfew from 6pm to 6am as of March 25. Syria braces itself for a potential medical crisis.

The Syrian healthcare sector has been crippled under a “maximum pressure” economic sanctions campaign that has collectively punished the Syrian people for the duration of a war waged against them by the same governments inflicting the catastrophic economic damage. Hospitals and medical care centers have been targeted and occupied by the extremist armed groups throughout Syria, further reducing the Syrian state-ability to deal with the looming threat of an apparently rapacious pandemic.

All measures taken against the Syrian government by the UK, US and EU are ostensibly to “protect” the Syrian people. Of course sanctions never protect the people, they deprive the people of basic needs, they decimate essential infrastructure. They are designed to weaken the target state or leadership, to turn the people against the government, to serve US-led foreign policy agendas in the region. Sanctions enable war and destruction, they are taken to bring resistant nations into line with horrifying consequences for the civilian population.

The U.S. is taking action to sanction Assad regime Lt. General Ayoub for the violence perpetuated against the people of northern #Syria. Such violence that impacts civilians, humanitarian workers, and hospitals must not be tolerated. We stand on the side of the Syrian people.

Instead of lifting sanctions to allow nations like Iran and Syria to combat what is described as a “global pandemic” that threatens the lives of all Syrians and Iranians according to the media hype – the US-led coalition of “humanitarian” intervention is effectively doubling down on their pro-sanction, pro-war rhetoric, as a recent statement from the UK, US, France and Germany has demonstrated. Former UK Ambassador to Syria, Peter Ford, described the statement as a thinly veiled cry of solidarity for Al-Qaeda in Syria, “There is not a word here with which Hayat Tahrir Ash Sham, the dominant jihadi group, would not concur.”

The Al-Qaeda-linked White Helmets group have sprung into action to defend the sanctions regime and to effectively condemn the huge majority of Syrian people to further misery should the pandemic take hold in Syria. An organisation with a history of collaboration with the US Coalition-sponsored armed groups in Syria, itself funded by the same governments, has been triggered by the billionaire-manufactured PR complex that manages and directs this shadow state construct.

Our #WhiteHelmets teams disinfected 146 locations yesterday in #Idlib, #Aleppo, and #Hama, including 5 camps, 23 hospitals, 73 mosques, and 49 schools and universities and other facilities, within preventive disinfection campaign that launched in northern #Syria. pic.twitter.com/YWJ9DP631w

We have seen a flurry of activity on their Twitter accounts, their primary platform, promoting the White Helmet “coronavirus” campaign. This is nothing short of cynical exploitation of a world crisis to weaponize it against the Syrian government via an entity that has served this purpose since its establishment, in Turkey, by a former British military intelligence officer, James Le Mesurier.

The White Helmets have published a statement calling for sanctions against Syria to be maintained. The statement is based on misinformation and duplicitous narratives including the claim that Syria and Russia are deliberately targeting hospitals, omitting that these hospitals are invariably taken over by the Al Qaeda-dominated armed groups in areas they control – converted into terrorist triage centers, prisons, courts, military centers and torture chambers.

Statement about the Syrian regime's request to lift economic sanctions on the pretext of fighting the #Covid19 virus in #Syria pic.twitter.com/bmhyYhGGyN

Raed Saleh, the leader of the White Helmets, was recently given a platform in the Senate to “[feed] the Senate Foreign Relations Committee the talking points that it should adopt.” Saleh’s highly politicized speech is echoed in his tweet, instrumentalising the coronavirus crisis to further amplify the talking points historically and fraudulently used to criminalize the Syrian government while airbrushing Nusra Front/Al-Qaeda from the Syrian conflict landscape.

From inside the quarantine, a message from the head of the #WhiteHelmets, Raed Al-Saleh, to our people in #Syria and the whole world about the prevention of #CoronaVirus. #StayAtHome pic.twitter.com/Yjjj93ml0x

White Helmets are neither neutral nor humanitarian

So, in summary, the White Helmets, a supposedly “neutral” “humanitarian” organisation are sustaining their donors “maximum pressure” campaign against the Syrian people they claim to support. If the White Helmets were anything other than an extremist, propaganda construct implementing the US Coalition “regime change” policy against Syria, they would have demanded a ban on sanctions to enable the country to collectively deal with the coronavirus crisis.

Three things stand out in this tweet. 1) A gullible Kelly Craft falling hard for the #WhiteHelmets' deception. 2) Standard W.Helmets child abuse & 3) A photo of Craft with a caption that plays to her ego. Al Qaeda in disguise continues to win American hearts & minds. #Syria https://t.co/CVPUQX37sk

The White Helmet organisation should be condemned for effectively enabling mass suffering and death in Syria, not only by providing cover for internationally designated terrorist groups, but, now, for endorsing sanctions that will ensure the perfect conditions for a global pandemic to spread like wildfire through a “hybrid warfare”-decimated nation.