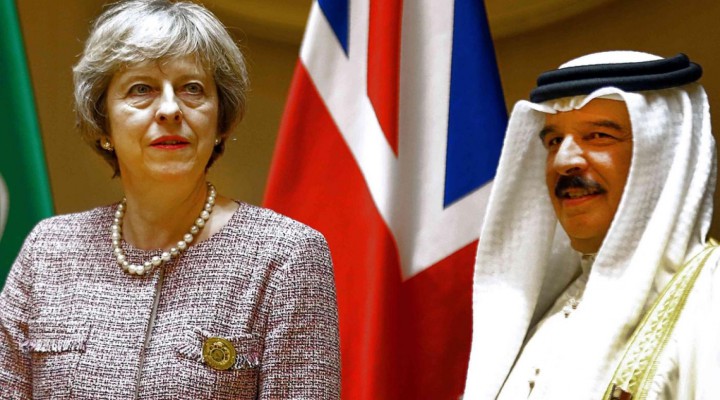 Exclusive– As the UK forges ahead with plans to seal a free trade agreement with Gulf monarchies, including Bahrain, 8 British MPs has expressed exasperation over the UK’s staunch support for the Manama regime condemning what they called its “blind eye” over human rights abuses there, and urging an end of funding to Manama.

One of the names mentioned in the UK’s House of Commons during Thursday’s backbench debates is that of Bahraini political prisoner ​​Abduljalil Al-Singace who has been on hunger strike for 190 days.

Al-Singace was sentenced to life imprisonment for his role in Bahrain’s pro-democracy protests in 2011. He launched his hunger strike on the 8th of July 2021, over the confiscation of his academic research, which the notorious Jaw prison’s authorities are refusing to return.

Leading a debate on the subject in the House of Commons, SNP’s Westminster human rights spokesman Brendan O’Hara cited the case of the Bahraini detained professor of engineering, Dr Abduljalil al-Singace, who has reportedly suffered torture and sexual abuse at the hands of security forces.

“I’m sorry to say nothing has been done and the government has remained largely silent,” O’Hara said. Besides, he blasted the UK government’s inaction to press Manama over Al-Singace’s plight. He said when it came to right and wrong, the Government’s position on Bahrain shows it has “clearly picked which side they are on”, adding that the relationship between Manama and London was “business as usual because human rights abuses is a price worth paying to secure a trade deal with just about anybody”.

While SNP’s Westminster human rights spokesman Brendan O’Hara criticised the UK Government’s approach, Foreign Office minister James Cleverly defended it, describing Bahrain as an “important partner and friend” which cooperates on security and other areas of UK national interest, while claiming the country is making progress on human rights.

Another SNP MP, Patricia Gibson  said that “those who criticise the regime in Bahrain are subject to the most cruel and random treatment”. “Even reports of rape and electric-shock treatments for detainees, some of whom are juveniles. That is the ugly story of life under the current regime in Bahrain”, Gibson added.

Other MPs highlighted the fact that the UK is on the eve of a post-Brexit, free trade deal with the Gulf Cooperation Council, which includes Bahrain. Bambos Charalambous, member of Parliament for Enfield Southgate said, “A true friend does not stay silent when the wrong course of action is being taken, adding, “As Shadow Minister for the Middle East and North Africa, I’m calling on the Government to stand up for what is right and help secure the release of political prisoners detained in Bahrain”.

“This is clearly not a partisan, party political matter. It’s clear that standing up for human rights for political prisoners in Bahrain and beyond transcends party politics,” said Labour MP Bambos Charalambous, shadow Middle East minister, during the hourlong debates.

For his part, Liberal Democrat MP Alistair Carmichael called for the Bahraini Minister of Interior Sheikh Rashid bin Abdullah al-Khalifa to be placed under Magnitsky sanctions “for his role in overseeing appalling human rights violations and a culture of impunity”.

Tory MP Bob Stewart  who visited Bahrain in November on a 5-day with a £5,349 trip paid for, by the Bahraini Ministry of Foreign Affairs, asserted that there were no political prisoners in the kingdom. “According to the Bahrain constitution, freedom of opinion and expression are expressly protected and no person can be prosecuted for such activities,” Stewart said.

The MPs went to attend the annual Manama Dialogue security summit, but also managed to squeeze in a few meetings with top Bahraini officials, including the kingdom’s interior minister, Rashid bin Abdullah Al Khalifa. MEE sought a comment from Bahrain’s embassy in London, but did not receive a response by the time of publication.

The MPs also asked Middle East Minister James Cleverly whether the government had key indicators that showed how effective its investment in Bahrain has been. Cleverly responded with what he said would be an “alternative and more balanced viewpoint”, arguing it was better for the UK to engage with its longtime ally than criticise from the sidelines.

Cleverly offered instances which he believed Manama was reforming, including “by introducing legislation offering alternatives to incarceration; the prosecution or disciplining of more than 90 security personnel by oversight bodies supported by the UK”.

O’Hara responded, saying he was deeply disappointed that Cleverly hadn’t named any of the political prisoners and that he and other MPs would continue to “shine a light where a light does not want to be shone”. “The message that came loud and clear from the minister that everything they have done for the last 10 years may have failed, but it’s business as usual,” he said.

The head of the Bahrain Institute for Rights and Democracy, UK-based, exiled Bahraini activist Sayed Ahmed Alwadaei, said, “the MPs were right to denounce the culture of impunity presided over by top Bahraini officials, including Interior Minister Sheikh Rashid AlKhalifa, and I echo their call for Magnitsky sanctions to be applied”.

Meanwhile, Human Rights Watch outlined Manama’s intensifying repression in its latest annual report, which throws the spotlight on deteriorating prison conditions where three detainees died in 2021 and where 26 prisoners of conscience are on death row, all at imminent risk of execution. The report also accuses Manama of failing to hold officials accountable for torture and ill-treatment, while blasting oversight mechanisms for not being independent of the government.

HRW notes that in the lead up to the 10th anniversary of the Bahrain uprising, the kingdom’s police beat children arrested in protest-related cases and threatened them with rape. Furthermore, the report points out that Manama failed to respond to multiple visit requests from thr UN special rapporteurs that date back to  2012.

After seven years behind bars, Bahrain’s jailed opposition leader Sheikh Ali Salman, who is serving a life sentence on trumped up espionage charges, said in a letter from prison that he is still open to dialogue. On Wednesday, he stressed that “love, tolerance” and giving priority to national interests “keeps our hearts and hands always open for dialogue.” “The desired political reform is in the interest of all, the rulers and the ruled, and it’s the cornerstone for improving our economic and living conditions and achieving political stability,” Sheikh Salman wrote. He finally affirmed that the establishment of stability and security will enable Bahrain to face “the most difficult political and regional challenges”.