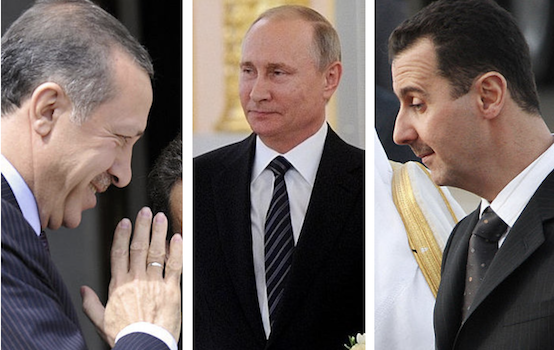 How events in Afghanistan, Astana, Adana, and Ankara all led to the victory of Russian diplomacy over U.S. force.

The ceasefire agreement brokered by Vice President Mike Pence and Secretary of State Mike Pompeo on Thursday accomplishes very little outside of putting window dressing on a foregone conclusion. Simply put, the Turks will be able to achieve their objectives of clearing a safe zone of Kurdish forces south of the Turkish border, albeit under a U.S. sanctioned agreement. In return, the U.S. agrees not to impose economic sanctions on Turkey.

So basically it doesn’t change anything that’s already been set into motion by the Turkish invasion of northern Syria. But it does signal the end of the American experiment in Syrian regime change, with the United States supplanted by Russia as the shot caller in Middle Eastern affairs.

To understand how we got to this point, we need to navigate the four A’s that underpin America’s failed policy vis-à-vis Syria—Afghanistan, Astana, Adana, and Ankara.

The first, Afghanistan, represents the epitome of covert American meddling in regional affairs—Operation Cyclone, the successful CIA-run effort to arm and equip anti-communist rebels in Afghanistan to confront the Soviet Army from 1979 to 1989. The success of the Afghanistan experience helped shape an overly optimistic assessment by the administration of President Barack Obama that a similarly successful effort could be had in Syria by covertly training and equipping anti-Assad rebels.

The second, Astana, is the capital city of Kazakhstan, recently renamed Nur Sultan in March 2019. Since 2017, Astana has played host to a series of summits that have become known as “the Astana Process,” a Russian-directed diplomatic effort ostensibly designed to facilitate a peaceful ending to the Syrian crisis, but in reality part of a larger Russian-run effort to sideline American regime change efforts in Syria.

The third “A”—Adana—is a major city located in southern Turkey, some 35 kilometers inland from the Mediterranean Sea. It’s home to the Incirlik Air Base, which hosts significant U.S. Air Force assets, including some 50 B-61 nuclear bombs. It also hosted a meeting between Turkish and Syrian officials in October 1998 for the purpose of crafting a diplomatic solution to the problem presented by forces belonging to the Kurdish People’s Party, or PKK, who were carrying out attacks inside Turkey from camps located within Syria.

The resulting agreement, known as the Adana Agreement, helped prevent a potential war between Turkey and Syria by formally recognizing the respective sovereignty and inviolability of their common border. In 2010, the two nations expanded the 1998 deal into a formal treaty governing cooperation and joint action, inclusive of intelligence sharing on designated terrorist organizations (i.e., the PKK). The Adana Agreement/Treaty was all but forgotten in the aftermath of the 2011 Syrian crisis, as Turkey embraced regime change regarding the Assad government, only to be resuscitated by Russian President Vladimir Putin during talks with Erdogan in Moscow in January 2019. The re-introduction of the moribund agreement into the Syrian-Turkish political dynamic successfully created a diplomatic bridge between the two countries, paving the way for a formal resolution of their considerable differences.

The final “A”—Ankara—is perhaps the most crucial when it comes to understanding the demise of the American position in Syria. Ankara is the Turkish capital, situated in the central Anatolian plateau. In September 2019, Ankara played host to a summit between Erdogan, Putin, and Iran’s President Hassan Rouhani. While the ostensible focus of the summit was to negotiate a ceasefire in the rebel-held Syrian province of Idlib, where Turkish-backed militants were under incessant attack by the combined forces of Russia and Syria, the real purpose was to facilitate an endgame to the Syrian crisis.

Russia’s rejection of the Turkish demands for a ceasefire were interpreted by the Western media as a sign of the summit’s failure. But the opposite was true—Russia backed Turkey’s demand for a security corridor along the Turkish-Syrian border, and accepted Ankara’s characterization of the American-backed Syrian Defense Forces (SDF) as “terrorists.” This agreement, combined with Turkey’s willingness to recognize the outcome of Syrian presidential elections projected to take place in 2021, paved the way for the political reconciliation between Turkey and Syria. It also hammered the last nail in the coffin of America’s regime change policy regarding Bashar al-Assad.

There is little mention of the four A’s in American politics and the mainstream media. Instead there’s only a skewed version of reality, which portrays the American military presence in Syria as part and parcel of a noble alliance between the U.S. and the Kurdish SDF to confront the ISIS scourge. This ignores the reality that the U.S. has been committed to regime change in Syria since 2011, and that the fight against ISIS was merely a sideshow to this larger policy objective.

“Assad must go.” Those three words have defined American policy on Syria since they were first alluded to by President Obama in an official White House statement released in August 2011. The initial U.S. strategy did not involve an Afghanistan-like arming of rebel forces, but rather a political solution under the auspices of policies and entities created under the administration of President George W. Bush. In 2006, the State Department created the Iran-Syrian Operations Group, or ISOG, which oversaw interdepartmental coordination of regime change options in both Iran and Syria.

Though ISOG was disbanded in 2008, its mission was continued by other American agencies. One of the byproducts of the work initiated by ISOG was the creation of Syrian political opposition groups that were later morphed by the Obama administration into an entity known as the Syrian National Council, or SNC. When Obama demanded that Assad must step aside in August 2011, he envisioned that the Syrian president would be replaced by the SNC. This was the objective of the Geneva Talks brokered by the United Nations and the Arab League in 2011-2012. One of the defining features of those talks was the insistence on the part of the U.S., UK, and SNC that the Assad government not be allowed to participate in any discussion about the political future of Syria. This condition was rejected by Russia, and the talks ultimately failed. Efforts to revive the Geneva Process likewise floundered on this point.

Faced with this diplomatic failure, Obama turned to the CIA to undertake an Afghanistan-like arming of Syrian rebels to accomplish on the ground what could not be around a table in Geneva.

The CIA took advantage of Turkish animosity toward Syria in the aftermath of suppression of anti-Syrian government demonstrations in 2011 to funnel massive quantities of military equipment, weapons, and ammunition from Libya to Turkey, where they were used to arm a number of anti-Assad rebels operating under the umbrella of the so-called “Free Syrian Army,” or FSA. In 2013, the CIA took direct control of the arm and equip program, sending teams to Turkey and Jordan to train the FSA. This effort, known as Operation Timber Sycamore, was later supplemented with a Department of Defense program to provide anti-tank weapons to the Syrian opposition.

American efforts to create a viable armed opposition ultimately failed, with many of the weapons and equipment eventually falling into the hands of radical jihadist groups aligned with al-Qaeda and, later, ISIS. The emergence of ISIS as a regional threat in 2014 led to the U.S. building ties with Syrian Kurds as an alternative vector for implementation of its Syrian policy objectives.

While the fight against ISIS was real, it was done in the context of the American occupation of fully one third of Syria’s territory, including oil fields and agricultural resources. As recently as January 2019, the U.S. was justifying the continued presence of forces in Syria as a means of containing the Iranian presence there; the relationship with the SDF and Syrian Kurds was little more than a front to facilitate this policy.

Turkish incursion into Syria is the direct manifestation of the four A’s that define the failure of American policy in Syria—Afghanistan, Astana, Adana and Ankara. It represents the victory of Russian diplomacy over American force of arms. This is a hard pill for most Americans to swallow, which is why many are busy crafting a revisionist history that both glorifies and justifies failed American policy by wrapping it in the flag of our erstwhile Kurdish allies.

But the American misadventure in Syria was never going to end well—bad policy never does. For the American troops caught up in the collapse of the decades-long effort of the United States to overthrow the Assad government, the retreat from Syria was every bit as ignominious as the retreats of all defeated military forces before them. But at least our forces left Syria alive, and not inside body bags—which was an all too real alternative had they remained in place to face the overwhelming forces of geopolitical reality in transition.