HOME / WORLD / Why the Syrian Kurds Aren’t Necessarily Our Friends 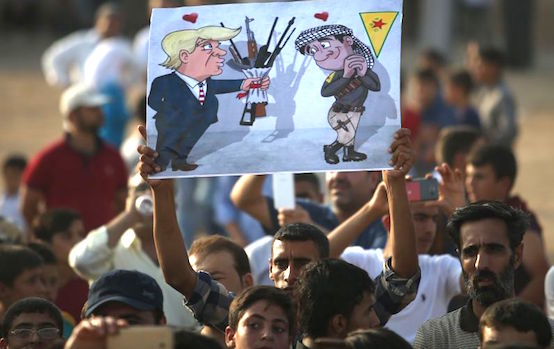 As usual, Beltway hawks and the media hive have oversimplified reality to advance their agendas.

Turkey’s President Recep Tayyip Erdogan has announced the commencement of “Operation Peace Spring,” a military incursion by the Turkish armed forces into northern Syria. The target of the offensive, according to Erdogan, are “terrorists” from the Kurdish Workers’ Party, or PKK, which is comprised of Turkish Kurds fighting for independence from Turkey, and Syrian Kurds from the YPG, or People’s Protection Units. Erdogan is also pledging to combat residual ISIS elements.

The Turkish move comes with an ostensible green light from President Trump, who cleared the way for the Turkish action by precipitously ordering the withdrawal of U.S. forces from the area.

Trump’s actions have been widely condemned as a betrayal of the Syrian Democratic Forces, or SDF, an American-trained and -equipped force of Syrian Kurds who played a lead role in the fight against ISIS in Syria, suffering thousands of casualties in the process. That Turkey, an American NATO ally, is waging war against the SDF (which the Turks label as YPG/PKK—more on that later), while at the same time targeting ISIS, the archenemy of the all these Kurdish groups, underscores the complexity of the regional politics at play in northern Syria today. Deciphering this alphabet soup goes a long way towards explaining why the Turkish actions are justified and why President Trump will ultimately be vindicated for pulling the troops out.

Truly understanding the complex history of the Kurds in the Middle East would require several Ph.D.’s worth of research, and even then questions would remain. My own opinions are, in large part, shaped by personal experience. When I was in high school, my father was assigned to the Joint U.S. Military Mission for Aid to Turkey, or JUSMMAT. My family accompanied him, and we settled in the Turkish capital of Ankara. One of the perks of this assignment was a very active Rod and Gun club, which my father and I took full advantage of. The Ankara club had a long-standing relationship with a Kurdish tribal leader named Reshad Bey, who would organize excursions into central Anatolia where we would hunt on lands owned by Kurdish villagers.

During one such hunt, our party (which consisted of a half-dozen Americans and a similar number of Kurds) was confronted by a platoon of Turkish Jandarma, or internal security troops. It was clear these troops had been lying in ambush for our group, and had it not been for the presence of the Americans, mischief would have followed.

That was my first experience with the difficult dynamic between Turkey and its Kurdish minority. Official Turkish policy prohibited one from calling the Kurds by their name; the Turks referred to them as “Mountain Turks” (as Americans, we did not comply with this absurdity). Moreover, the Kurds were prohibited from speaking their own language, although on the hunts, that was the way they communicated with one another. There was a discernible tension between the Kurds and the Turks, as witnessed by the presence of the Jandarma patrol. My family left Turkey in 1977, and a year later, the Kurdish Workers Party, or PKK, was founded in eastern Turkey, precipitating a struggle for Kurdish independence from Turkey that continues to this day.

Since then, I’ve keenly followed the conflict between Turkey and the PKK. My personal interest became professional during the Gulf War, when I helped monitor Turkey’s activities in northern Iraq, the PKK having established itself there, which prompted Turkish military incursions into Iraq. I was surprised to learn that Turkey was aided in part by Iraqi Kurds opposed to the PKK.

The complexity of inter-Kurdish politics was driven home when, in 1992, I led a team of UN weapons inspectors to inspect the area around the Bekhme Dam, located some 40 miles northeast of the city of Irbil, considered to be the capital of Iraqi Kurdistan. At that time, Iraqi Kurdistan had freed itself from Iraqi governmental control, and Irbil was controlled by a faction of Iraqi Kurds known as the Patriotic Union of Kurdistan, or PUK. The territory around Irbil was contested between the PUK and another Kurdish faction, the Kurdish Democratic Party, or KDP. These two factions did not get along.

In order to get to Bekhme Dam, my team was flown in by helicopter to a remote landing zone located in no-man’s land between the PUK and KDP, where we negotiated our transit to the site to be inspected. We were turned over to KDP Peshmerga, or fighters, who accompanied us on our drive through the Zagros mountains. Before we got to Bekhme Dam, however, our convoy was stopped at a roadblock manned by the PKK; the Bekhme Dam fell under their span of control. Scott Ritter on the satellite phone negotiating access to Bekhme Dam in the Kurdish region of Northern Iraq in August 1992. (credit: Henry Arvidsson/UNSCO)M.

There was discernible unease between our KDP escorts and the PKK fighters manning the roadblock. It turned out that it was the KDP who had been helping the Turks fight the PKK. Through some deft diplomacy on my part, my team was able to gain access to the inspection site, although the PKK was far less impressed with my being an American than they were with my U.N. credentials. By 1994, the PUK and KDP were in open war against one another, and the KDP was cooperating with Iran and Turkey to oust the PKK from Iraqi territory.

The Kurdish proclivity for infighting is a historic fact, underscoring the reality that while the Kurds dream globally, they act locally, especially when it comes to the issue of independence. The Kurds of the Middle East are spread across the region, their homeland divided by the territorial borders of Turkey, Iraq, Iran, and Syria. My experience in Iraq underscored the reality that Kurds will turn on Kurds when it comes to protecting their regional interests. This was underscored by the experience of the Kurdish Regional Government, or KRG, formed in northern Iraq in the aftermath of the fall of Saddam Hussein in 2003.

A large part of the political viability of the KRG, which represented an uncomfortable alliance between the KDP and the PUK, was dependent upon income derived from the sale of oil produced on Kurdish-controlled territory. To maximize their profits, the Kurds sold their oil to Turkey, cutting out the Iraqi government as a middleman. The Turks used this relationship as a vehicle for controlling the political appetites of the Kurds, restraining any call for independence that might resonate among them. The extent of this relationship is demonstrated by the fact that Turkey employed fighters from the KDP to help in its struggle against the PKK. Oil, however, proved to be a double-edged sword—when the KRG undertook to hold a referendum on independence in 2017, it incurred the wrath of both Turkey and the Iraqi government. The Iraqi military seized control of the Kurdish oil fields, ending the KRG’s independent source of income, and subordinating Iraqi Kurdistan to Baghdad.

If the dream of Kurdish independence was quashed in Iraq, it still lingered in Syria, where the Kurds there took advantage of the war that’s ravaged that country since 2011 to impose a regional autonomy in 2012 known as Rojava. A key element of Rojava was the creation of the People’s Protection Units, or YPG, as the de facto armed forces of the Kurdish political entity. While ostensibly a Syrian entity, Rojava has a parallel function as an expatriate front of the PKK, with its political arm, the Democratic Union Party, or PYD, serving as little more than the Syrian affiliate of the PKK.

Turkey has expressed dissatisfaction with the creation of Rojava and the formation of the YPG, rightly recognizing that there was nothing to distinguish them from the PKK, which it views as a terrorist organization. Turkey’s anti-Rojava animus was held in check by the expansion of ISIS in 2014 and the role played by the YPG in combatting the terrorist group. The United States made common cause with the YPG in the larger war against ISIS but, recognizing Turkey’s sensitivities, had that organization rebrand itself as the Syrian Democratic Forces (SDF). This rebranding fooled no one. Turkey views the SDF—and rightly so—as nothing more than a front for the YPG/PKK.

The American embrace of the SDF was always a temporary solution to the problem of ISIS. The United States never has supported a greater Kurdish nation. And while there’s been much lip service to the idea of using the SDF as a vehicle to destabilize the government of Bashar al-Assad, regime change has never been seriously pursued by the United States in Syria. Today there is widespread recognition that, following the intervention of Russia in 2015, Assad is here to stay.

Trump’s decision to withdraw American forces from the Syrian border zone makes perfect sense: it avoids a damaging conflict with Turkey, a strategic NATO ally, and sidesteps a potential major power confrontation with Russia. This was always in the cards, since the United States was never a guarantor of the Syrian Kurds’ objective of autonomy. But the precipitous way that the American redeployment was announced, and the fact that it was done void of any coordination with either the Kurds or other U.S. regional allies, sets the stage for more geopolitical chaos in a region already wracked by conflict.