HOME / WORLD / Turkey: a force of invasion in Syria 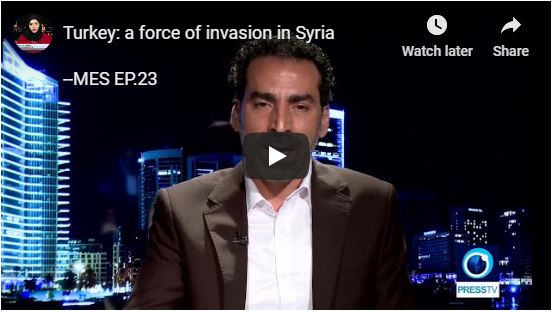 The Turkish invasion of northeastern Syria is likely to result in a high number of casualties in the near term and significant instability in the region in the longer term. We discuss this segment with Laith Marouf expert in Middle East politics.

Press TV’s Lebanese-American Journalist Serena Shim was killed in Turkey in 2014 for revealing the truth regarding the relationship between Turkey and Daesh. Given that Turkish intelligence threatened Serena, according to her testimony, and that Turkey is notorious world-wide for its imprisonment and murder of journalists, the US State Department’s and MSM’s lack of concern is incriminating in itself. We discuss this segment with Press TV correspondent in Beirut Maryam Saleh.

0 thoughts on “Turkey: a force of invasion in Syria”