HOME / WORLD / Trump’s Syria pullout was right. Why is the Washington establishment so shocked? 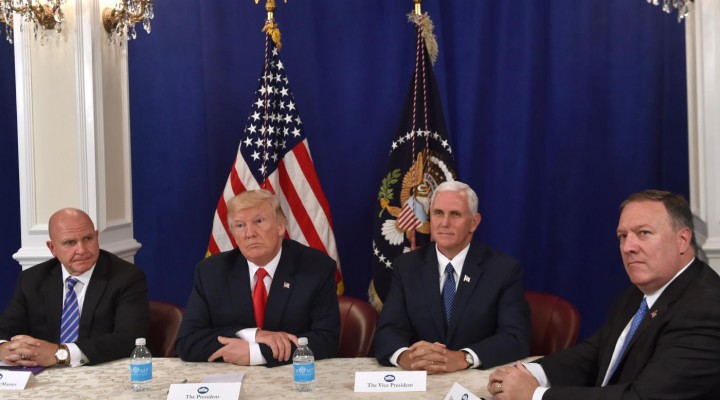 With a tweet released at dawn on 13 October, US President Donald Trump has probably issued one of the most truthful statements of his controversial political career. It is worth reporting  the tweet’s text in full:

“The same people that got us into the Middle East Quicksand, 8 Trillion Dollars and many thousands of lives (and millions of lives when you count the other side), are now fighting to keep us there. Don’t listen to people that haven’t got a clue. They have proven to be inept!”

The tweet represents one of the most significant indictments that a US president has ever issued against the foreign policy that his own country has pursued in the Middle East for several decades.

The issue is quite relevant looking at the situation in north-eastern Syria.

In just over three lines, Trump concludes that the US over the last two decades has spent – he should rather say wasted – $8 trillion and lost thousands of soldiers; US policy in the region has resulted in the loss of millions of lives – quite an extraordinary admission of guilt; those who decided US policy in the region had no idea what the Middle East was and what they were doing; finally, those who have implemented this policy have proved to be inept.

For those who were looking for a good explanation as to why the US foreign policy establishment is so pervasively opposed to its own commander in chief, this 51-word tweet offers one of the best explanations.

Above all, Trump has dared to flag publicly some unseemly truths about US policy in the Middle East that some members of the US establishment have already understood but are hesitant to recognise publicly, while others, still the vast majority, persist in ignoring or, worse, can’t even understand, and, perhaps, never will.

It remains beyond any reasonable understanding why the withdrawal of a handful of US soldiers from a war zone full of hostile forces, where they could do nothing to alter the situation on the ground, can generate so much passion and hostile mobilisation inside Washington’s Beltway.

Maybe the motive is to safeguard the United States’ credibility? However, a great nation’s credibility should be gauged by its capability to avoid – or fix – fateful mistakes, and not from persevering in them without a clear strategy, as the Syrian case is sadly showing.

Trump is blamed for one of the few sensible decisions (perhaps the only one) he has made in his foreign policy. At the same time, serial mistakes that could soon generate a strategic nightmare for the United States are at best ignored, or openly supported and solicited, by Washington’s establishment.

The US’s ineptitude, in fact, is not limited to the Middle East. Looking at the global stage, Washington’s policy is actually creating precisely what all the greatest Anglo-Americans geopolitical experts of the 20th century – from Halford Mackinder to Nicholas Spykman, from Zbigniew Brzezinski to George Friedman – have for decades urged to refrain from doing: the birth of a bloc of Eurasian countries hostile to the United States.

Actually, it is quite difficult to find a reasonable explanation of why the United States has decided to engage in a confrontational way with Russia, China, Iran and Turkey all at the same time, while the basic requirements of geopolitics – those that any freshmen student of international relations would easily grasp – would advise against doing so.

The American foreign policy and security establishment is in the throes of a kind of psychosis towards all these states.

For the first time in recent history, the main players of Eurasia seem drawn into coalescing against a perceived common enemy: America. The western segment of this macro-continent, Europe, is under strong pressure to take a side.

Looking at the growing transatlantic tensions on trade issues and on NATO’s burden sharing, plus specific American threats to Germany for its reliance on Russian gas supplies, the geopolitical picture that is emerging is gloomy – to say the least.

It would be unfair to charge Trump alone for this apparent disastrous accomplishment. The roots of this clumsy policies have been serially planted by the Clinton, Bush Jnr and Obama administrations. Trump’s could finally harvest the outcome.

The current president, whether consciously or not, is trying to cut America’s losses and leave others to get mired in the Middle East’s quicksand. He is trying to differentiate between Russia and China but to no avail. Washington’s establishment seems blindly committed to an incautious, dangerous, and probably self-harming, crusade against everyone.

Richard Nixon and Henry Kissinger, who attained the biggest US foreign policy masterstroke since the Second World War with the historic opening to China, paving the way for detente with the Soviet Union, are now watching what their successors are accomplishing; the former is probably turning in his grave, while the second, in the few years of his life that remain, must suffer the humiliation of seeing undone one of his greatest successes.

The US is risking the most serious geopolitical setback in its entire history: a Eurasian bloc of nations united against her, which are willing to disengage from the world order shaped and led by the United States, or worse, challenge it openly, and to decouple their economies from the dollar as the world’s reserve currency.

Washington’s establishment (the Pentagon, what remain of the State Department, the intelligence community, Congress, the mainstream media and think tanks) seems incredibly concerned only by the future of two thousand soldiers deployed in north-eastern Syria in the context of a confrontation where America has already been defeated by Russia, Iran, Syria and Hezbollah.

God save the United States of America from itself!

0 thoughts on “Trump’s Syria pullout was right. Why is the Washington establishment so shocked?”