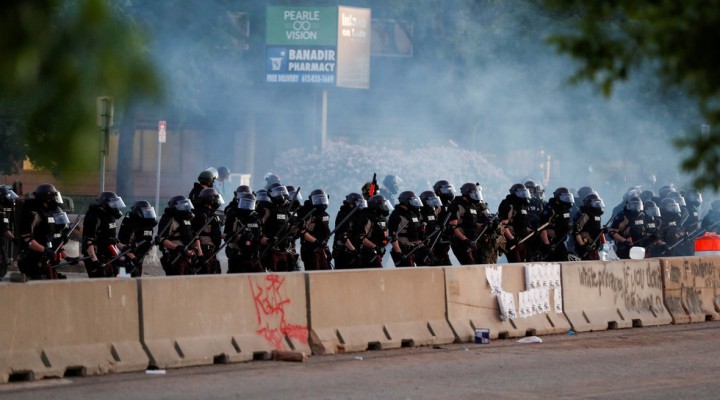 Right-wing members of Congress have issued a report calling for the US to move to defend itself against a reimagined global threat. But it ignores the fact that, after George Floyd, America’s world standing is irreparably damaged.

A new document published by the Republican Study Committee (RSC), an adjunct of the conservative caucus of House Republicans and a self-described “leading influencer on the Right,” proposes a policy roadmap to reassert American global leadership by flexing US military and economic muscle in confronting a myriad of reimagined threats.

It offers a long list of possible actions against “America’s most aggressive global adversaries” such as China, Russia and Iran, including the “toughest sanctions ever proposed.”

Whether labeling China as “America’s top threat” or revalidating a previous observation made by former Secretary of Defense James Mattis of Russia being “the principal threat” to the US, this document, entitled Strengthening America & Countering Global Threats, paints a disturbing picture of a fortress America surrounded by a sea of enemies.

Luckily for the world, the RSC has no formal ability to turn these bizarre policy pronouncements into actual policy. While many of its members, including its Chairman, Mike Johnson, and the Chairman of the National Security and Foreign Affairs Task Force, Joe Wilson, serve on influential committees in the US House of Representatives, these committees today function as part of a Democratic-controlled House which is loath to cede any powers to the right-wing of the Republican Party.

The purpose of papers such as these, however, is not to make policy, but rather influence those who do make policy. A recent communication from Republican Senator Marco Rubio, who in his role as acting Chairman of the Senate Select Committee on Intelligence and a member of the Committee on Foreign relations, is well-positioned to shape foreign and defense policy in a Republican-controlled Senate, shows the reach and influence of the RSC’s work.

“BOTH #China & #Russia are now undertaking active measures to drive & deepen pre-existing divisions in our country,” Rubio tweeted in response to the report’s publication “Read this important @RepublicanStudy report which highlights some of the actions the US can take to address these threats head on.”

In terms of strength of argument and quality of research, Strengthening America & Countering Global Threats fails. It is not an academic product, but a distinctly political one. Balanced, diplomatic language is pushed aside, replaced by a more provocative prose designed to inflame rather than inform.

Its worldview is a simplistic one where the American values of freedom, democracy, human rights, the rule of law, and open markets, face off against global authoritarianism manifested in the form of China, Russia, Iran and their proxies.

Not surprisingly, the RSC leans heavily on the economic strength of the US when building the toolbox of options it demands. By offering up “the toughest package of sanctions ever proposed by Congress” to deal with the Chinese Communist Party, Russia and Iran, the group seeks to expand existing policies that already impose punishing sanctions. Which ignores the reality that to date the overreliance upon sanctions has resulted in no changes in behavior on the part of the nations so targeted.

Moreover, by seeking to use economic sanctions as a means of shaping the foreign policy of nations such as China, Russia and Iran, the US ends up more often than not in conflict with its own allies, given the broad reach of so-called secondary sanctions.

These impose penalties against individuals and institutions accused of running afoul of US law, despite the fact that their actions conform with international law and reflect bilateral trade agreements where the US plays no direct role.

The RSC also seeks to broaden the powers given to the President to fight international terrorism. While on the surface it appears to be a simple continuation of existing policy, its expansive designation of what constitutes a terrorist organization would put the US in direct conflict with Lebanon, Iraq and Russia, all of whom would be designated as state sponsors of terrorism, given their alleged ongoing relationships with the Iranian Revolutionary Guard Corps.

To accomplish these sweeping goals, the RSC proposes the complete revamping of the US State Department to maintain an “international order based upon American values.”

The existing Foreign Service, dedicated to implementing US foreign policy regardless of which political party controls the White House, would be replaced by a “new diplomatic corps rooted in merit rather than tenure.”

What this means is that political appointees, rather than career professionals, would be in charge of implementing policy. The State Department would become little more than a partisan propaganda machine focused on so-called “public diplomacy” and “counter disinformation” (the latter of which, according to the RSC plan, would be contracted to “private entities.”)

Both in terms of its world view and the solutions proposed, Strengthening America & Countering Global Threats comes off more as parody than a serious effort to inform and influence policy.

While the attention given to it by influential policy makers such as Senator Rubio provide a veneer of gravitas, the document itself must be evaluated in the context of the reality of America’s global position.

Today, we have an economy ravaged by the coronavirus pandemic. Our international reputation is stained by both the inconsistent and ineffective policies of the Trump administration and the wave of protests over the brutality of the American state in the murder of George Floyd.

Neither these hardline Republicans nor the United States as a whole is in a position to try to sell so-called American values of freedom, democracy, human rights, the rule of law, and open markets to an increasingly skeptical world.

Can We Survive Our Collective Stupidity?