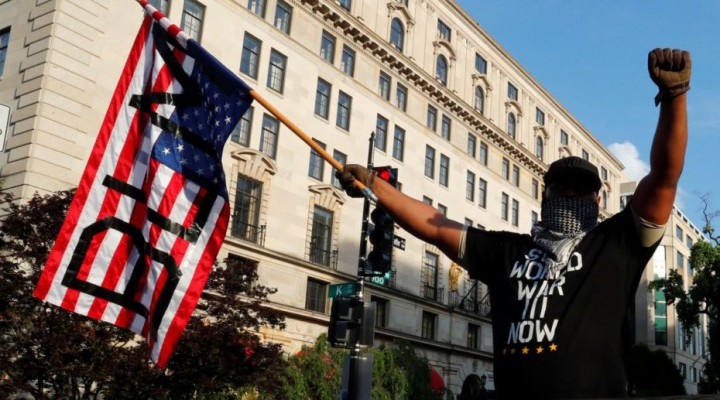 One thing is for sure, no matter who is ultimately held accountable, no one in the Congress or White House will be taking the blame for anything.

If one ventures into the vast wasteland of American television it is possible to miss the truly ridiculous content that is promoted as news by the major networks. One particular feature of media-speak in the United States is the tendency of the professional reporting punditry to go seeking for someone to blame every time some development rattles the National Security plus Wall Street bubble that we all unfortunately live in. The talking heads have to such an extent sold the conclusion that China deliberately released a lethal virus to destroy western democracies that no one objects when Beijing is elevated from being a commercial competitor and political adversary to an enemy of the United States. One sometimes even sees that it is all a communist plot. Likewise, the riots taking place all across the U.S. are being milked for what it’s worth by the predominantly liberal media, both to influence this year’s election and to demonstrate how much the news oligarchs really love black people.

As is often the case, there are a number of inconsistencies in the narrative. If one looks at the numerous photos of the protests in many parts of the country, it is clear that most of the demonstrators are white, not black, which might suggest that even if there are significant pockets of racism in the United States there is also a strong condemnation of that fact by many white people. And this in a country that elected a black man president not once, but twice, and that black president had a cabinet that included a large number of African-Americans.

Also, to further obfuscate any understanding of what might be taking place, the media and chattering class is obsessed with finding white supremacists as instigators of at least some of the actual violence. It would be a convenient explanation for the Social Justice Warriors that proliferate in the media, though it is supported currently by little actual evidence that anyone is exploiting right-wing groups.

Simultaneously, some on the right, to include the president, are blaming legitimately dubbed domestic terrorist group Antifa, which is perhaps more plausible, though again evidence of organized instigation appears to be on the thin side. Still another source of the mayhem apparently consists of some folks getting all excited by the turmoil and breaking windows and tossing Molotov cocktails, as did two upper middle class attorneys in Brooklyn last week.

Nevertheless, the search goes on for a guilty party. Explaining the demonstrations and riots as the result of the horrible killing of a black man by police which has revulsed both black and white Americans would be too simple to satisfy the convoluted yearnings of the likes of Wolf Blitzer and Rachel Maddow.

Which brings us to Russia. How convenient is it to fall back on Russia which, together with the Chinese, is reputedly already reported to be working hard to subvert the November U.S. election. And what better way to do just that than to call on one of the empty-heads of the Barack Obama administration, whose foreign policy achievements included the destruction of a prosperous Libya and the killing of four American diplomats in Benghazi, the initiation of kinetic hostilities with Syria, the failure to achieve a reset with Russia and the assassinations of American citizens overseas without any due process. But Obama sure did talk nice and seem pleasant unlike the current occupant of the White House.

The predictable Wolf Blitzer had a recent interview with perhaps the emptiest head of all the empowered women who virtually ran the Obama White House. Susan Rice was U.N. Ambassador and later National Security Advisor under Barack Obama. Before that she was a Clinton appointee who served as Undersecretary of State for African Affairs. She is reportedly is currently being considered as a possible running mate for Joe Biden as she has all the necessary qualifications being a woman and black.

While Ambassador and National Security Advisor, Rice had the reputation of being extremely abrasive. She ran into trouble when she failed to be convincing in support of the Obama administration exculpatory narrative regarding what went wrong in Benghazi when the four Americans, to include the U.S. Ambassador, were killed.

In her interview with Blitzer, Rice said: “We have peaceful protesters focused on the very real pain and disparities that we’re all wrestling with that have to be addressed, and then we have extremists who’ve come to try to hijack those protests and turn them into something very different. And they’re probably also, I would bet based on my experience, I’m not reading the intelligence these days, but based on my experience this is right out of the Russian playbook as well. I would not be surprised to learn that they have fomented some of these extremists on both sides using social media. I wouldn’t be surprised to learn that they are funding it in some way, shape, or form.”

It should be noted that Rice, a devout Democrat apparatchik, produced no evidence whatsoever that the Russians were or have been involved in “fomenting” the reactions to the George Floyd demonstrations and riots beyond the fact that Nancy Pelosi, Hillary Clinton and Joe Biden all believe that Moscow is responsible for everything. Clinton in particular hopes that some day someone will actually believe her when she claims that she lost to Trump in 2016 due to Russia. Even Robert Mueller, he of the Russiagate Inquiry, could not come up with any real evidence suggesting that the relatively low intensity meddling in the election by the Kremlin had any real impact. Nor was there any suggestion that Moscow was actually colluding with the Trump campaign, nor with its appointees, to include National Security Advisor designate Michael Flynn.

Fortunately, no one took much notice of Rice based on her “experience,” or her judgement insofar as she possesses that quality. Glenn Greenwald responded “This is fuxxing lunacy — conspiratorial madness of the worst kind — but it’s delivered by a Serious Obama Official and a Respected Mainstream Newscaster so it’s all fine… This is Infowars-level junk. Should Twitter put a ‘False’ label on this? Or maybe a hammer and sickle emoji?”

Russian Foreign Ministry spokesman Maria Zakharova accurately described the Rice performance as a “perfect example of barefaced propaganda.” She wrote on her Facebook page “Are you trying to play the Russia card again? You’ve been playing too long – come back to reality” instead of using “dirty methods of information manipulation” despite “having absolutely no facts to prove [the] allegations… go out and face your people, look them in the eye and try telling them that they are being controlled by the Russians through YouTube and Facebook. And I will sit back and watch ‘American exceptionalism’ in action.”

It should be assumed that the Republicans will be coming up with their own candidate for “fomenting” the riots and demonstrations. It already includes Antifa, of course, but is likely to somehow also involve the Chinese, who will undoubtedly be seen as destroying American democracy through the double whammy of a plague and race riots. Speaking at the White House, National Security Adviser Robert O’Brien warned about foreign incitement, including not only the Chinese, but also Iran and even Zimbabwe. And, oh yes, Russia. One thing is for sure, no matter who is ultimately held accountable, no one in the Congress or White House will be taking the blame for anything.