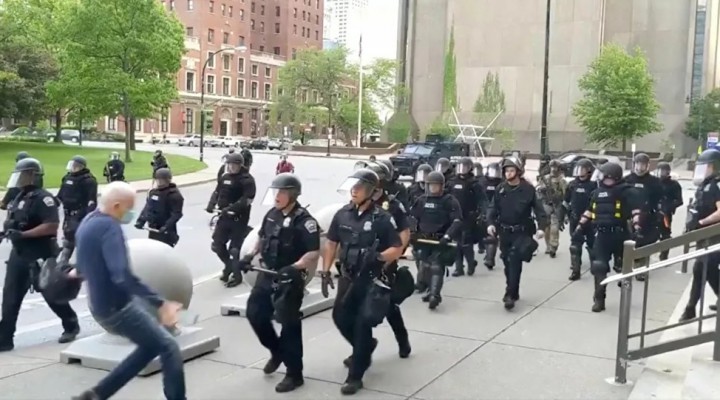 Donald Trump’s indulgence in conspiracy theories is running amok. The latest is his speculation that a 75-year-old man who had his skull split open by police was a “provocateur”.

The man in question, Martin Gugino, was shoved to the ground by police officers after he approached them openly, without threat and in broad daylight during a public protest in Buffalo, New York state. He fell backwards, suffering concussion and spilling blood on the sidewalk. Dozens of police officers in riot gear then walked past his prone body to enforce a curfew.

Two officers have been subsequently charged with assault over the incident.

A follow-up report on the One American News Network, a pro-Trump outlet, claimed that Gugino may have been a supporter of antifascist provocateurs. Trump then amplified that highly speculative report with his Twitter platform.

This time Trump may have gone too far even for Republican lawmakers and senior GOP figures. Several of them deplored the president for “fanning the flames” of violence and “reckless” peddling of conspiracy theories.

There is no evidence that the elderly protester was doing anything other than peacefully exercising his Constitutional right to support the mass demonstrations that have engulfed the US after the killing of African-American man George Floyd by Minneapolis police on 25 May.

WARNING! The following photo is graphic and may offend sensibilities

© REUTERS / JAMIE QUINN
SENSITIVE MATERIAL. THIS IMAGE MAY OFFEND OR DISTURB Martin Gugino, a 75-year-old protester, lays on the ground after he was shoved by two Buffalo, New York, police officers during a protest against the death in Minneapolis police custody of George Floyd in Niagara Square in Buffalo, New York, U.S., June 4, 2020

Like thousands of other US citizens protesting against police brutality over the past two weeks, Martin Gugino found himself subjected to police brutality. The world has been shocked by images of officers manhandling civilians, driving vehicles into crowds, shooting at journalist crews and sweeping into neighbourhoods like vigilante gangs, yelling at residents to go inside their homes.

Trump has pitched himself as a “law and order president”, calling for the National Guard to back up riot police. He and his supporters have sought to portray largely peaceful protests as being infiltrated by extreme leftwing subversives, referred to as “Antifa”. This is not to deny that such radical activists exist across the US, but Trump’s claims about their presence and influence are grossly exaggerated.

Even US law enforcement organisations have found little evidence of Antifa being responsible for fomenting protests in hundreds of American cities and towns, the vast majority of which have been peaceful and of a wide multiracial composition, simply demanding an end to racist policing.

Trump’s seeking of a scapegoat has been echoed by his Secretary of State Mike Pompeo who has hinted darkly at “outsiders” whipping up protests.

This conspiratorial thinking is aimed at confusing the overdue public debate on US police brutality and militarisation of law and order. By blaming others and inflaming passions and prejudices, the desired effect is to let the system off the hook.

The same blame-game is at play over Trump’s attempts to incriminate China or the World Health Organisation for spreading the coronavirus pandemic.

Like his latest Tweet about a 75-year-old man being a provocateur for getting his head smashed in by police, Trump has accused China without a shred of evidence of releasing the virus from one of its laboratories.

It really is a sign of how extreme Trump has become when Ari Fleischer, the former press secretary of Iraq War president GW Bush, has denounced the current White House Commander-in-Chief as “reckless in trafficking conspiracy theories”.

Earlier this week, Trump’s White House switched the “Antifa” trope by claiming that the mass protests across the US were the work of Venezuelan President Nicolas Maduro.

Trump is showing himself to be completely deranged as well as being a chillingly cynical practitioner of the dark arts. His earlier advice about people drinking household bleach as a cure for Covid-19 also show him to be a dangerous buffoon.

But the truth is that such conspiratorial loony-thinking is embedded in US political culture in a way that cuts across both so-called right and left.

The supposed liberals in the Democrats and their supportive media like the New York Times  and CNN may condemn Trump for peddling outlandish speculation and for “pouring gasoline on flames”.

But these same sources have been relentlessly pumping out nonsense about Russian and Chinese interference in US politics, setting up geopolitical conflicts that pander to American imperialism and its military industrial complex.

For decades, it is a staple of US politics and establishment media to portray American social problems as the work of outside agitators and foreign enemies. McCarthyism, Red-baiting and so.

Conspiracy-thinking about phantom bogeymen is the traditional way for US politics to avoid fundamental democratic change because it conceals the inner corruption. It’s just rather apt that’s all that the current president is a conspiracy theorist-in-chief.