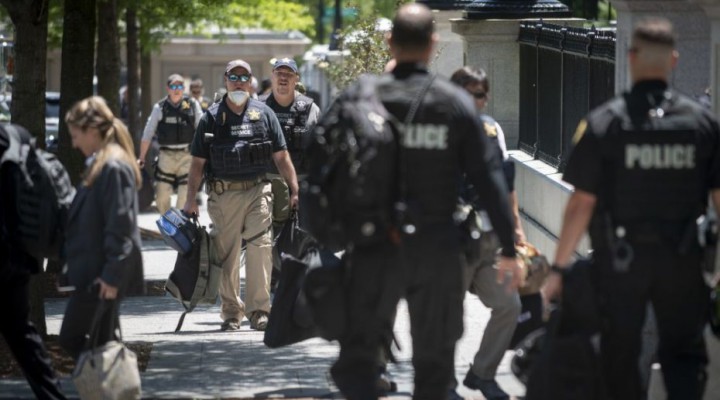 History has always treated harshly those tyrants and strongmen who have been gratuitously violent toward their subjects and citizens and believed in purposely creating misery for their charge. Donald John Trump, the third impeached president of the United States, decided to clear peaceful protesters gathered a full block from the White House, so he could have his photograph taken standing in front of a church. It was not any church, but St. John’s Episcopal Church, dubbed the “Church of the Presidents,” owing to the several chief executives who have worshiped there over the decades.

To prepare for Trump’s photo op, paramilitary forces not only cleared the street of protesters with tear gas, flash bang grenades, pepper balls, and rubber bullets, but expelled the church’s rector, as well as a seminarian and several parishioners, from the church grounds. Trump and his Heinrich Himmler-like Attorney General, William Barr, a member of the fascist Catholic order Opus Dei, declared the church and the AFL-CIO labor union headquarters next to it, part of a White house security zone. The Trump occupation zone lasted for 48 hours. The invading troops retreated back a block, ending their occupation of the church and labor union building.

At the beginning of the siege, unidentified paramilitary forces, not displaying any rank or affiliation, took up positions on intersections around the White House. There were reports that the military show of force had input from Trump son-in-law Jared Kushner and presidential aide Stephen Miller. Yet, there were no condemnations of the action by major Jewish organizations in the United States of either Kushner nor Miller, both of whom are Jewish white supremacists and both of whom literally stole a historic church from the Episcopal Diocese of Washington. Had Barack Obama seized control of a Washington, DC synagogue – to be sure, no such thing would have ever occurred — the reaction from the usual suspects, namely the Anti-Defamation League and the American Jewish Congress, would have been certain, swift, and very loud.

On December 16, 1989, the security forces of the Romanian government, which was a dictatorship headed by President Nicolae Ceausescu and his wife, Deputy Prime Minister Elena Ceausescu, ordered Hungarian Reformed Pastor László Tőkés evicted from his government-supplied home in the city of Timișoara. A crowd of parishioners gathered around Tőkés’s home to prevent their pastor from being evicted. Soon, the crowd of protesters grew to include those who were not members of Tőkés’s church but opposed the government’s edict. The Romanian security police, the Securitate, used tear gas and water cannons to break up the protesters and, in the process, placed many under arrest. Soon, the protesters gathered around the Romanian Orthodox Cathedral, where they were, again, met with Securitate forces. Martial law was declared in Timișoara.

On December 18, ethnic Romanians and Hungarians, singing Romanian patriotic songs, reassembled at the Romanian Orthodox Cathedral. Securitate troops fired on the protesters, killing some and severely wounding others. On December 20, some 100,000 striking workers entered the city and joined the protests. The government sent a delegation to negotiate with the protesters. The government agreed to release protesters previously arrested but rejected the protesters’ main demand, the resignation of Nicolae Ceausescu. Soon, the Timișoara protest was joined by striking workers from other towns.

On December 21, Ceausescu, who had been visiting Iran during the outbreak of the rebellion in Timișoara, returned to Bucharest. On December 21, Ceausescu gave a public address to a crowd of 100,000 people who the state propaganda organs billed as a “spontaneous movement of support for Ceaușescu.” It was as specious and laughable a claim in 1989 about Ceausescu’s “popular support” as is today’s White House pronouncements about Trump’s widespread “backing” among American voters.

Ceausescu blamed the uprising on “agitators,” the same phrase Trump, Barr, and other administration members are using to describe protests around the United States, calling them the work of “antifa” (anti-fascist) “terrorists.” Dr. Martin Luther King, a Baptist pastor, was often accused of being an outside agitator during his civil rights career. It has long been the experience with tyrants and dictators to blame the problems of their nations on outside influences and not their own malfeasance, corruption, and shortcomings.

During Ceausescu’s speech, anti-government chants and booing began emanating from the crowd. There were reports that the Securitate was either setting off firecrackers or shooting into the crowd with live rounds in order to disperse what had been transformed from a support rally to a massive protest. Romanian state television tried to cut the live broadcast. Soon, the protest turned into an anti-government riot and Securitate officers were forced to hustle Ceausescu, his wife, and other government officials into the Communist Party’s Central Committee building. The massive uprising was confronted with force by the Securitate, the military, and various paramilitary forces. The Ceausescus decided to barricade themselves in the Central Committee rather than make a run for it and flee Bucharest. Soon, disgruntled workers from outside of Bucharest entered the city to join the protesters.

On December 22, Ceausescu made a feeble attempt to address the crowd of protesters from the Central Committee building’s balcony. He was met with angry shouting. The Minister of Defense, Vasile Milea, refused Ceausescu’s order to shoot the demonstrators gathered outside the building. Milea died under suspicious circumstance and many Romanians believe that Milea was shot by the Securitate on the orders of Ceausescu. During the protests near the White House, Defense Secretary Mark Esper and Joint Chiefs of Staff Chairman, General Mark Milley, resisted efforts by Trump to order active duty U.S. troops to confront protesters in the American capital and in other cities around the country through the invocation of the arcane 1807 Insurrection Act.

After Milea’s death, Ceausescu named Victor Stănculescu as Defense Minister. Stănculescu convinced the Ceausescu’s to leave the Central Committee building by a helicopter waiting on the roof. Stănculescu then also ordered all the troops deployed in Bucharest with orders to suppress the revolt to return to their barracks. The Defense Minister and his officers stood by as angry protesters ransacked the Central Committee building. Since protesters had overrun the Presidential Palace, the helicopter carrying the Ceausescus flew to Snagov, a small town outside of Bucharest, where the president maintained a country retreat. After the Ceausescus escaped Snagov on another helicopter, the pilot landed it, falsely stating he was having engine problems. That forced the Ceausescus to hitch a ride in the car of a bicycle repairman to the city of Târgoviște, where they were hidden away in an agricultural institute located on the outskirts of the city. The bicycle repairman notified the local police about the couple he had picked up on the road. During the afternoon of December 22, the Ceausescus were arrested and taken to the military garrison of Târgoviște.

On December 24, the Council of the National Salvation Front ordered an Extraordinary Military Tribunal to try Nicolae and Elena Ceausescu for genocide and a host of other crimes, including corruption. At his December 25 trial, Nicolae Ceausescu called the tribunal “illegitimate” and he berated several witnesses, including Stănculescu, as “traitors.” Fast forward to the present time in which Donald Trump often accuses his critics and government whistleblowers of being “traitors” and claims that Congressional powers are “illegitimate.”

The Ceausescus were found guilty of the charges leveled against them and they were led outside the makeshift courtroom and executed by a firing squad composed of three paratroopers. No one expected that the eviction of a Reformed pastor in Timișoara nine days earlier would lead to the overthrow and execution of the tyrant Ceausescu.

Herein, lies an important lesson for Trump. Even a powerful dictator like Ceausescu was unable to stop a tidal wave of popular anger. Some popular revolutions are often spontaneous occurrences, triggered by the most unlikely of events, and ending with dramatic consequences. In Timișoara, it was a local pastor. In the United States, it was an African-American man named George Floyd being asphyxiated under the jackboot of a racist police officer and a protest by Washington, DC Episcopal priest and rector named Reverend Gini Gerbasi that led to her eviction from a church. Evicting Tőkés is what ultimately led to the downfall and execution of the Ceausescus. By evicting Gerbasi from St. John’s for protesting the police murder of George Floyd in Minneapolis, Trump may have written his own political epitaph.