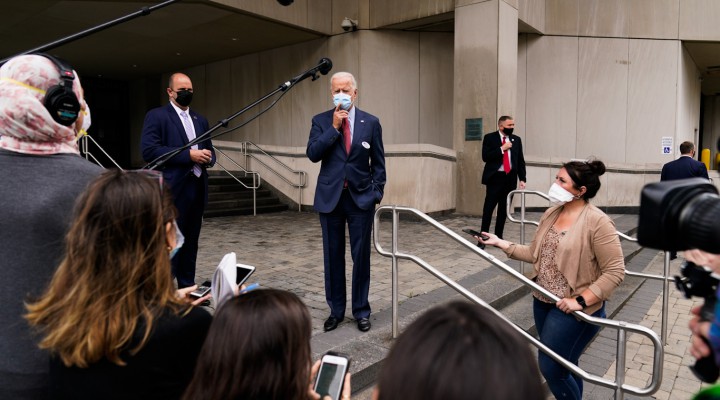 Figures on both the right and the left are presenting Biden as a progressive champion, the reality though, is that he has always represented the right-wing of the Democratic Party, and his Latin America policy is no exception.

MPN- With less than a week to go, polling shows Democratic candidate Joe Biden to hold a 7.1 point average lead on incumbent president Donald Trump. Thus, thoughts of what his foreign policy would look like have come to the fore. Yesterday, The New York Times published a long piece discussing the 77-year-old’s plans for Latin America. The Times was hopeful, noting that Biden would seek to “repudiate” Trump’s “hardball approach” to the region, which has caused a great deal of harm, rallying round shared goals of combating climate change.

Yet buried deep in the article is perhaps the most eye-opening sentence:

Mr. Biden’s advisers say they would seek to revive the anti-corruption campaign that set off political earthquakes across the Americas starting in 2014, but largely stalled in recent years.”

What the authors are referring to is a continent-wide campaign to unseat progressive leaders that ended in the jailing of Brazilian president Lula da Silva, the impeachment of his successor Dilma Rousseff, and the rise of the far-right authoritarian Jair Bolsonaro. The so-called Operation Car Wash (“Lava Jato” in Portuguese) was ostensibly an attempt to root out corruption at all levels of society. Yet leaked documents and recordings have shown that, from the beginning, it was a naked powerplay attempt by Brazil’s rich elite to retake control of society from the progressive Workers’ Party administrations through legal means.

This supposed anti-corruption purge was presided over by Judge Sergio Moro, who presented himself as a neutral actor working in the people’s interest. But an investigation by The Intercept showed that Moro was, in fact, in constant contact with the prosecution, instructing them on how to proceed to impeach Lula. Once Lula was imprisoned and barred from running in the 2018 election (despite being the overwhelming favorite to win), Moro took a job as justice minister in Bolsonaro’s cabinet. The case against the two Workers’ Party presidents was weak, to say the least, with many of those leading the prosecution themselves under investigation for more serious corruption cases.

Earlier this year, The Intercept also revealed how intimately (and illegally) involved the Obama and Trump administrations were in Lava Jato. The U.S. Department of Justice was operating in secret from the Brazilian government, working closely with the prosecution, training, coaching and advising them on how best to proceed.

The National Security Agency (NSA) under Obama-Biden also bugged the phones of 29 top Brazilian officials, including President Dilma and many of her staff. This, despite Brazil being an official ally of the United States.

Yet since Lula’s election in 2002, Brazil had also been a thorn in the side of Washington, acting as a barrier to American regime change operations against leftist governments in the region. Lula, a self-described socialist and anti-imperialist, forged close ties with leaders like Venezuela’s Hugo Chavez and Cuba’s Castro brothers, while also refusing to support a U.S.-backed right-wing secessionist movement in Eastern Bolivia aimed at undermining President Evo Morales.

Lula later drew Washington’s ire by independently brokering a nuclear deal with Iran that undermined Obama’s claims that Tehran would never agree to one, hence the need for sanctions.

And so, while The Times report presents Bolsonaro as an adversary of Biden, his rise was directly facilitated by the Obama administration’s policies in Latin America.

Biden’s advisors have also laid out their plans for Central America, which include a $750 million package tied to privatization drives and austerity measures that might perpetuate the very economic and political conditions that led migrants to flee in the first place. His team also doubled down on his commitment to regime change in Venezuela, although, like Trump, he appears to be growing weary of U.S.-backed figure Juan Guaidó.

Figures both on the right and the left are presenting Biden as a progressive champion. Conservative commentator Ben Shapiro described the Democrats as “the party of Bernie Sanders,” claiming that Biden is a “facade for [leftist] radicalism.” In equally questionable fashion, Rep. Ilhan Omar also claimed that she expected a leftward shift from Biden after the election. Biden, however, is currently considering a number of Republicans for senior positions in his administration, while sidelining Sanders and even Elizabeth Warren, despite their widespread popular support among the party’s rank and file. In reality, Biden has always represented the right-wing of the Democratic Party, and his policy on Latin America is little different, bearing more similarities than differences with the Trump administration’s.