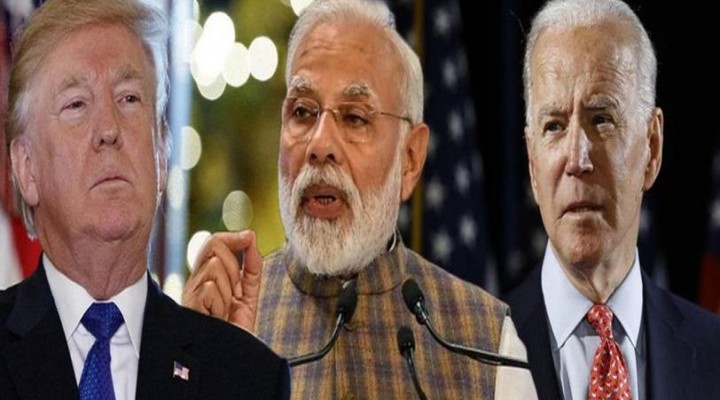 The US’ alliance with India will remain a mainstay of its grand strategy regardless of who wins next week’s elections since it’s a bipartisan issue of the highest importance for its permanent military, intelligence, and diplomatic bureaucracies (“deep state”).

Analysts are scrambling to speculate the possible foreign policy changes that a Biden presidency might bring if he wins next week’s election, but one aspect of American grand strategy that isn’t likely to change is the US’ alliance with India. The two Great Powers formalized their military partnership earlier this week with the signing of the “Basic Exchange and Cooperation Agreement” (BECA), the third so-called “foundational pact” after the “Logistics Exchange Memorandum Of Agreement” (LEMOA) and “Communication Compatibility and Security Agreement” (COMCASA) which collectively improve these countries’ military interoperability. Neither side hides their shared anti-Chinese intentions either, as the author explained at length in his September analysis about how “It Was Inevitable That India Would Seek To Actively ‘Contain’ China”, which is a trend that he’s been closely following since mid-2016 when it was still “taboo” for the Alt-Media Community to discuss it. This trajectory will remain on track for several key reasons regardless of whoever wins the presidency.

Step By Step, President By President

The first is that the American bureaucratic machine has already kicked into gear and is intensely focusing its military, intelligence, and diplomatic (“deep state”) efforts into actualizing this alliance. It will therefore be extremely difficult to reverse this trend even if Biden sincerely wanted to, yet there’s no reason to suspect that he does since he was one of the overseers of the Obama-era “Pivot to Asia” which laid the basis for Trump’s formalization of America’s alliance with India. In fact, it can be argued that Obama — who built upon the progress pioneered by Bush Jr. such as the nuclear cooperation pact during that time — is one of the forefathers of this alliance since it wouldn’t have happened had it not been for his decision to continue his predecessor’s policies in this respect. As such, there’s no doubt that America’s alliance with India is a bipartisan issue for the US establishment.

“Pivoting” From West To East Asia Via The South

Another point to made is that the “Pivot to Asia” naturally transitions the US’ strategic focus from West Asia to East Asia while traversing through the South Asian space between both. India isn’t just an ordinary country in US foreign policy planning, though, since its demographic and economic capabilities pair perfectly with its geostrategic location atop the Afro-Asian (“Indian”) Ocean to make it attractive as a “counterweight” to China. This explains its pivotal importance in the emerging Quad military network of anti-Chinese states, as well as the fact that its location is almost smack dab in the center of the Eastern Hemisphere which thereby makes it more important than any of that bloc’s other members. Neither Trump nor Biden could afford to ignore this unprecedented geostrategic opportunity, hence why they’re predicted to actually double down on it regardless of whoever wins since it best serves their nation’s interests to do so.

While Trump and Biden have different attitudes towards China, that still won’t change the importance of India for their foreign policy visions. The incumbent will likely employ a more aggressive strategy of openly exploiting India as China’s foil in “Greater South Asia” (Central Asia/Afro-Asian Ocean/Southeast Asia) whereas Biden might be “gentler” with his approach out of a desire to reach a “New Detente” with China (whether for pragmatic or corrupt reasons). The Democrat candidate would continue the US’ growing trend of arms sales to that state but might care more about political and economic cooperation with India than any military-driven approach to “containing” China. If the prediction about Biden’s desire for a “New Detente” with the People’s Republic plays out, then India’s role would simply be to keep China “in check” as opposed to actively countering it like Trump envisions. Either way, India still serves a very strategic purpose for both presidential candidates.

This fact should be taken into consideration by all relevant stakeholders, especially Russia, which is already intensely competing with the US simply to retain its decades-long dominant position in the Indian arms market. That’s not at all to say that Russia should “dump” India, but just to propose that it must begin seriously countenancing contingency plans in the event that it loses more influence in the South Asian state otherwise it stands to become New Delhi’s “junior partner” and risk provoking an unintended “security dilemma” with China. The author warned about that scenario in his September analysis asking “Is Russia ‘Abandoning’ Or ‘Recalibrating’ Its ‘Balancing’ Act Between China & India?” and recommended that decision makers consider the dual response of reaching out to India to form a new Non-Aligned Movement (“Neo-NAM”) while enhancing strategic relations with Pakistan in order to restore “balance” to Russia’s “balancing” act. Failing to do so might destabilize the central tenet of Russian grand strategy, which is become Eurasia’s supreme “balancing” force.

No observer should doubt for a moment that America’s alliance with India will remain among its top grand strategic priorities regardless of the outcome of next week’s election. The gears of government are working in unison to promote this goal, which represents the culmination of Trump, Obama, and Bush Jr.’s efforts in a truly remarkable display of bipartisan agreement on a pressing issue of foreign policy significance. While Trump and Biden have different visions of how best to utilize their country’s alliance with India, the fact remains that they’ll nevertheless employ this partnership with increasing frequency to advance their respective goals, be it actively “containing” China like the incumbent envisions or more “gently” keeping it “in check” to uphold the “New Detente” that his opponent wants to clinch during his (or even more likely, his Vice Presidential pick’s) potential term. As this game-changing trend accelerates and increasingly becomes one of the main geostrategic determinants of Eastern Hemispheric affairs, Russia will be forced to recalibrate its “balancing” act with India.