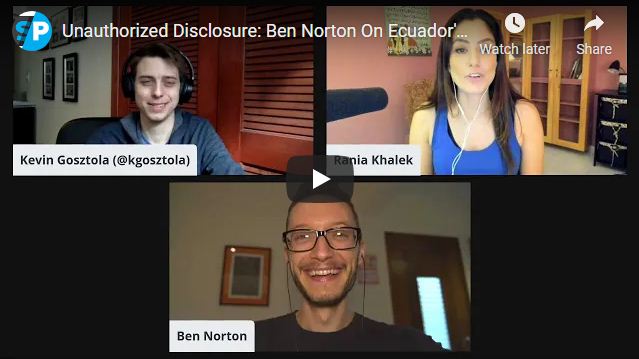 Ben Norton of The Grayzone joins Rania Khalek and Kevin Gosztola for this week’s edition of the “Unauthorized Disclosure” podcast.

He speaks to us from Ecuador about the election results, where President Lenin Moreno’s party was absolutely trounced. The left-wing candidate Andrés Arauz won by a wide margin, but he did not secure enough of the vote to avoid a runoff.

As Ben outlines, a US-backed coalition is forming around a pseudo-left candidate named Yaku Pérez, who is controlled opposition. He is unwilling to stand up to the US and other neoliberal institutions of power that threaten the well-being of Ecuadorians.

Later in the show, Ben addresses some recent stories involving Chile, Nicaragua, and Brazil—all of which illustrate the US government’s continued commitment to crushing the so-called Pink Tide in Latin America as it surges back into power throughout the region.

0 thoughts on “Unauthorized Disclosure: Ben Norton On Ecuador’s Election, US Efforts To Crush A Resurgent Left”