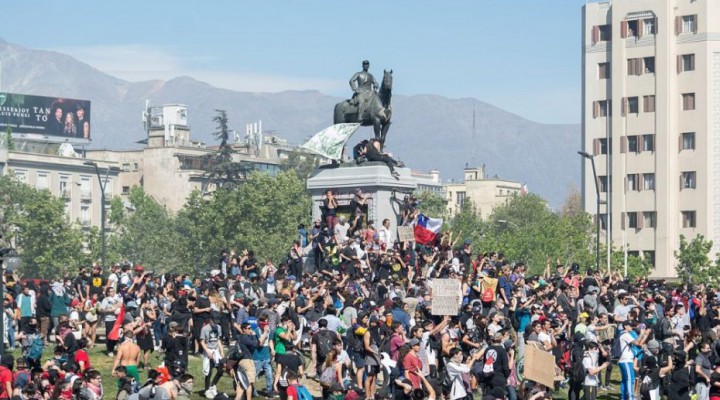 Neoliberalism is – literally – burning. And from Ecuador to Chile, South America, once again, is showing the way, Pepe Escobar writes.

Neoliberalism is – literally – burning. And from Ecuador to Chile, South America, once again, is showing the way. Against the vicious, one-size-fits-all IMF austerity prescription, which deploys weapons of mass economic destruction to smash national sovereignty and foster social inequality, South America finally seems poised to reclaim the power to forge its own history.

Three presidential elections are in play. Bolivia’s seem to have been settled this past Sunday – even as the usual suspects are yelling “Fraud!” Argentina and Uruguay are on next Sunday.

Blowback against what David Harvey has splendidly conceptualized as accumulation by dispossession is, and will continue to be, a bitch. It will eventually reach Brazil – which as it stands continues to be torn to pieces by Pinochetist ghosts. Brazil, eventually, after immense pain, will rise up again. After all, the excluded and humiliated all across South America are finally discovering they carry a Joker inside themselves.

The question posed by the Chilean street is stark: “What’s worse, to evade taxes or to invade the subway?” It’s all a matter of doing the class struggle math. Chile’s GDP grew 1,1% last year while the profits of the largest corporations grew ten times more. It’s not hard to find from where the huge gap was extracted. The Chilean street stresses how water, electricity, gas, health, medicine, transportation, education, the salar (salt flats) in Atacama, even the glaciers were privatized.

That’s classic accumulation by dispossession, as the cost of living has become unbearable for the overwhelming majority of 19 million Chileans, whose average monthly income does not exceed $500.

Paul Walder, director of the Politika portal and an analyst for the Latin-American Center of Strategic Analysis (CLAE) notes how less than a week after the end of protests in Ecuador – which forced neoliberal vulture Lenin Moreno to ditch a gas price hike – Chile entered a very similar cycle of protests.

Walder correctly defines Chile’s President Sebastian Pinera as the turkey in a long-running banquet that involves the whole Chilean political class. No wonder the mad as hell Chilean street now makes no difference between the government, the political parties and the police. Pinera, predictably, criminalized all social movements; sent the army to the streets for unmitigated repression; and installed a curfew.

Pinera is Chile’s 7th wealthiest billionaire, with assets valued at $2.7 billion, spread out in airlines, supermarkets, TV, credit cards and football. He’s a sort of turbo-charged Moreno, a neoliberal Pinochetist. Pinera’s brother, Jose, was actually a minister under Pinochet, and the man who implemented Chile’s privatized welfare system – a key source of social disintegration and despair. And it’s all interlinked: current Brazilian Finance Minister Paulo Guedes, a Chicago boy, lived and worked in Chile at the time, and now wants to repeat the absolutely disastrous experiment in Brazil.

The bottom line is that the economic “model” that Guedes wants to impose in Brazil has totally collapsed in Chile.

Chile’s top resource is copper. Copper mines, historically, were owned by the US, but then were nationalized by President Salvador Allende in 1971; thus war criminal Henry Kissinger’s plan to eliminate Allende, which culminated in the original 9/11, in 1973.

Pinochet’s dictatorship later re-privatized the mines. The largest of them all, Escondida, in the Atacama desert – which accounts for 9% of the world’s copper – belongs to Anglo-Australian giant Bhp Billiton. The biggest copper buyer in world markets is China. At least two-thirds of income generated by Chilean copper goes not to the Chilean people, but to foreign multinationals.

Before Chile, Ecuador was semi-paralyzed: inactive schools, no urban transport, food shortages, rampant speculation, serious disturbances on oil exports. Under fire by the mobilization of 25,000 indigenous peoples in the streets, President Lenin Moreno cowardly left a power void in Quito, transferring the seat of government to Guayaquil. Indigenous peoples took over the governance in many important cities and towns. The National Assembly was AWOL for almost two weeks, without the will to even try to solve the political crisis.

By announcing a state of emergency and a curfew, Moreno laid out a red carpet for the Armed Forces – and Pinera duly repeated the procedure in Chile. The difference is that in Ecuador Moreno bet on Divide and Rule between the indigenous peoples’ movements and the rest of the population. Pinera resorts to outright brute force.

Apart from applying the same old tactics of raising prices to obtain further IMF funds, Ecuador also displayed a classic articulation between a neoliberal government, big business and the proverbial US ambassador, in this case Michael Fitzpatrick, a former Assistant Secretary for Western Hemisphere matters in charge of the Andean region, Brazil and the Southern Cone up to 2018.

The clearest case of total neoliberal failure in South America is Argentina. Less than two months ago in Buenos Aires, I saw the vicious social effects of the peso in free fall, inflation at 54%, a de facto food emergency and the impoverishment of even solid sectors of the middle class. Mauricio Macri’s government literally burned most of the $58 billion IMF loan – there’s still $5 billion to arrive. Macri is set to lose the presidential elections: Argentines will have to foot his humongous bill.

Macri’s economic model could not but be Pinera’s – actually Pinochet’s, where public services are run as a business. A key connection between Macri and Pinera is the ultra-neoliberal Freedom Foundation sponsored by Mario Vargas Llosa, who at least boasts the redeeming quality of having been a decent novelist a long time ago.

Macri, a millionaire, disciple of Ayn Rand and incapable of displaying empathy towards anyone, is essentially a cipher, pre-fabricated by his Ecuadorian guru Jaime Duran Barba as a robotic product of data mining, social networks and focus groups. A hilarious take on his insecurities may be found in La Cabeza de Macri: Como Piensa, Vive y Manda el Primer Presidente de la No Politica, by Franco Lindner.

Among myriad shenanigans, Macri is indirectly linked to fabulous money laundering machine HSBC. The president of HSBC in Argentina was Gabriel Martino. In 2015, four thousand Argentine accounts worth $3.5 billion were discovered at HSBC in Switzerland. This spectacular capital flight was engineered by the bank. Yet Martino was essentially saved by Macri, and became one of his top advisers.

All eyes now should be on Bolivia. As of this writing, President Evo Morales won Sunday’s presidential elections in the first round – obtaining, by a slim margin, the necessary 10% spread for a candidate to win if he does not obtain the 50% plus one of the votes. Morales essentially got it right at the end, when votes from rural zones and from abroad were fully counted, and the opposition had already started to hit the streets to apply pressure. Not surprisingly, the OAS – servile to US interests – has proclaimed a “lack of trust in the electoral process”.

Evo Morales represents a project of sustainable, inclusive development, and crucially, autonomous from international finance. No wonder the whole Washington Consensus apparatus hates his guts. Economy Minister Luis Arce Catacora cut to the chase: “When Evo Morales won his first election in 2005, 65% of the population was low income, now 62% of the population has access to a medium income.”

The opposition, without any project except wild privatizations, and no concern whatsoever for social policies, is left to yell “Fraud!”, but this could take a very nasty turn in the next few days. In the tony suburbs of southern La Paz, class hate against Evo Morales is the favorite sport: the President is referred to as “indio”, a “tyrant” and “ignorant”. Cholos of the Altiplano are routinely defined by white landowning elites in the plains as an “evil race”.

None of that changes the fact that Bolivia is now the most dynamic economy in Latin America, as stressed by top Argentine analyst Atilio Boron.

The campaign to discredit Morales, which is bound to become even more vicious, is part of imperial 5G war, which, Boron writes, totally obliterates “the chronic poverty that the absolute majority of the population suffered for centuries”, a state that always “maintained the population under total lack of institutional protection” and the “pillaging of natural wealth and the common good”.

Of course the specter of IMF vulture ventures won’t vanish in South America like a charm. Even as the usual suspects, via World Bank reports, now seem “concerned” about poverty; Scandinavians offer the Nobel Prize on Economics to three academics studying poverty; and Thomas Piketty, in Capital and Ideology, tries to disassemble the hegemonic justification for accumulation of wealth.

What still remains absolutely off limits for the guardians of the current world-system is to really investigate hardcore neoliberalism as the root cause of wealth hyper-concentration and social inequality. It’s not enough to offer Band-Aids anymore. The streets of South America are alight. Blowback is now in full effect.