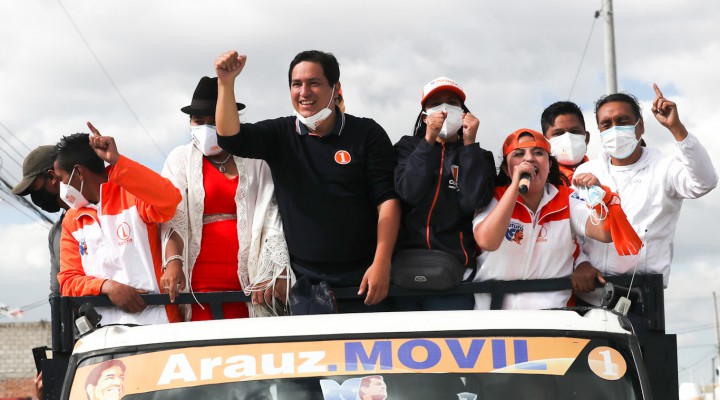 Adding to worries that a Bolivia-style coup might be imminent in Ecuador, Lenín Moreno will spend his final days in office in Washington, DC, where he’s been meeting with members of the Biden administration.

MPN- Polls show socialist, anti-imperialist candidate Andrés Arauz to be the clear frontrunner in Ecuador’s presidential elections slated to take place this Sunday, February, 7. Some even suggest the 35-year-old might receive double the votes of his nearest competitor in the first round of voting. Yet it now appears that the greatest danger to Arauz is not his rival candidates, but the threat of authorities canceling the election to prevent his victory.

International groups are flying in to monitor the contest, scheduled for February 7, with some calling for increased involvement of regional bodies like the Organization of American States (OAS). However, given its role in the far-right military coup in Bolivia in 2019, it is far from clear whether they would improve or hinder the process. Formed in 1948 and headquartered in Washington, D.C., the body has consistently allied itself with U.S. foreign policy directives, permanently suspending Cuba from its members in 1962. Since then, it has often been used to legitimate American intervention in the region.

Only adding to the worries that a Bolivia-style coup might be imminent in Ecuador is current president Lenín Moreno’s decision to spend his final few days in office not in his homeland, but in Washington, D.C., where he has been meeting with senior members of the new Biden administration, the managing director of the International Monetary Fund (IMF), and OAS chief Luis Almagro, who is currently under investigation for his part in Bolivia’s coup.

Rafael Correa, president of the country between 2007 and 2017, raised the alarm on social media, warning that the National Electoral Council of Ecuador is meeting to discuss suspending the elections because of Arauz’s imminent victory, while Moreno’s trip to Washington is an attempt to get official approval for the plan.

“The OAS and Ecuador’s neoliberal president are looking to suspend elections so as to cling on to power and stop the coming victory of the Correa left. In Bolivia, a similar plan failed after the August general strike proved that the coup regime could not withstand an uprising,” wrote MintPress’ Ollie Vargas from Bolivia.

The youthful Arauz is a disciple of Correa. Indeed, he said he would have chosen him as his running mate had Moreno not banned him from politics and forced him to flee to Belgium. If Correa returns to Ecuador under the current administration, he will be immediately imprisoned on corruption charges. Unlike Moreno, who received billions of dollars from the organization, Arauz has promised to rid Ecuador of the IMF, an organization he sees as predatory and a tool of the United States. He is also proposing to greatly increase public spending, raise taxes on the wealthy and increase capital controls on money leaving the country. He aims to continue Correa’s anti-poverty and anti-imperialism drives, suggesting he will reconnect with other leftist governments like Bolivia and Venezuela and seek a more amicable relationship with China. Thus, it is clear why both the IMF and U.S. government would wish to see his victory stalled or prevented. A man holds an anti-IMF sign depicting Lenin Moreno as a vulture at a protest in Quito, July 16, 2020. Dolores Ochoa | AP

“Arauz will win unless they steal it from him,” said Professor Steve Ellner, managing editor of the journal Latin American Perspectives. “After all, Correa had a 60% favorable rating when he left office. Moreno is completely discredited, and [conservative candidate Guillermo] Lasso has been around too long to be considered a new face for business in politics — and in addition is associated with global capital.”

Serving for ten years, Correa was the first president in modern history to be re-elected in Ecuador and presided over a period of remarkable tranquility for the often politically chaotic nation. In his time in office, he managed to reduce poverty by 38% and extreme poverty by 47% while also doubling social spending. Economic and political independence were key themes of his rule, too. He renegotiated the government’s share of the nation’s substantial oil revenues from 13% to 87%, hitting foreign energy corporations’ bottom lines hard. He also ejected all American troops from the country and forged regional ties with other like-minded neighboring nations. Ecuador also offered asylum to a number of Western dissidents, among them Wikileaks cofounder Julian Assange.

Correa’s vice-president, Moreno was elected on the express promise to carry on his legacy. However, almost immediately, he reversed most of his predecessor’s economic and political stances, inviting the IMF back in the country and moving closer to the U.S. Poverty and unemployment grew again. He also presided over one of the most inept COVID responses seen worldwide. On orders from the IMF, he had previously slashed public health budgets by 36% and expelled hundreds of Cuban doctors in an effort to please the Trump administration. As a result, the country was overwhelmed by COVID-19, with images of bodies being left in the streets for days going viral worldwide.

“The situation in Ecuador is very fucked up. I don’t even have the means to [explain in] English all of what’s happening. The new Minister of Health is an incredible idiot. Coronavirus or not this country is in big trouble with this wildly incompetent government,” said MintPress contributor and Quito resident Camila Escalante.

Economic issues are the primary concern for voters in this election, with 32% identifying poverty and 25% unemployment as their key worries. The country’s poverty rate jumped from 25.7% in December 2019 to 58.2% in June 2020, with extreme poverty quadrupling over the same period. A second issue is the ongoing COVID crisis, the latest chapter of which revolves around vaccines meant for public hospitals being diverted to private clinics in affluent areas, a scandal that has already been dubbed “vaccines for the elites, cardboard coffins for the rest.”

Arauz’s two closest rivals for the presidency are Guillermo Lasso, a 65-year-old banker and former Coca-Cola executive who has a strong following among the country’s upper-middle class and 51-year-old indigenous leader Yaku Pérez. Pérez came to national attention after leading protests against Moreno’s austerity measures in 2019. However, he has distanced himself from the left. When asked to comment on Arauz’s plan to give $1,000 to one million Ecuadorian mothers who are heads of their households, he replied that he opposed the idea because they would “probably spend it all on beer that same day.” Both trail Arauz in the polls, meaning that he could achieve outright victory in one round of voting, a rare achievement in a multi-party democracy. However, given the plots brewing, Arauz may have more to fear from the U.S. and his own election authorities than from his political rivals.

0 thoughts on “With Anti-IMF Candidate Surging in Polls, Ecuador’s Moreno Flies To DC Amid Talk of Suspending Election”