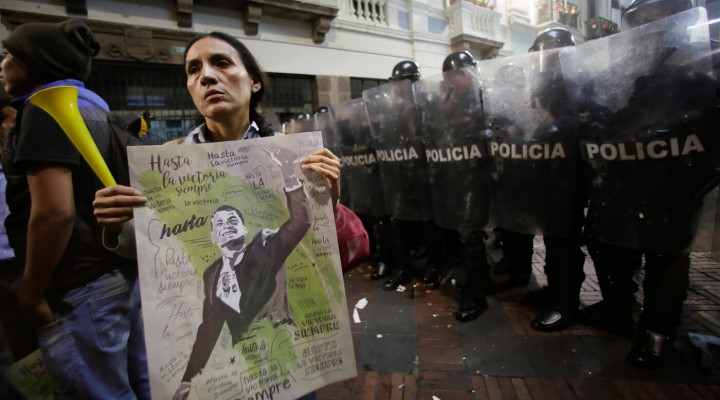 MPN- The recent violation of Assange’s rights as both political asylee and citizen of Ecuador sends a chilling message to Ecuadorians who are being increasingly targeted for their political views both within Ecuador and abroad.

Last week, Ecuador’s government gravely undermined not only its own national sovereignty but international refugee and asylum laws by allowing U.K. police into its London embassy to arrest then-Ecuadorian citizen, Ecuadorian asylee, and journalist Julian Assange.

As has been observed by many analysts, the shocking yet somewhat anticipated decision has shown that Ecuador’s government — led by Lenín Moreno — is willing to play fast and loose with its domestic laws, as well as international law, if it stands to benefit Moreno and his increasingly unpopular administration, whose approval rating now hovers at around 30 percent.

In the hours that followed Assange’s disturbing arrest, which saw him dragged from the embassy by British police, Ecuador’s government has wasted no time in taking actions that are not only highly troubling but show Moreno’s willingness to embrace fascist tactics in his desperate bid to silence dissent.

Indeed, a key factor in Moreno’s decision to revoke Assange’s asylum and Ecuadorian citizenship, was alleged to be Moreno’s rage at WikiLeaks — the organization Assange founded but no longer runs — for simply retweeting and spreading information regarding the burgeoning INA Papers corruption scandal, which centers around an offshore bank account in Panama linked to Moreno and his family. Notably, the firestorm of media coverage around Assange’s violent removal from the embassy has distracted from the media coverage of the scandal.

Shortly after Assange was arrested inside Ecuador’s London embassy, Moreno’s government began what has been described as a “witch hunt” against Assange allies living within Ecuador. Just hours after Assange was arrested, Ecuador arrested Swedish national Ola Bini as Bini attempted to board a flight to Japan. Bini, who was living in Ecuador with valid work and residency permits, was held in detention without a hearing for 30 hours — the legal limit is 24 hours — and was only provided access to a lawyer after 17 hours.

At the hearing, which was held around 11 p.m. local time, Ecuador requested that Bini be given 90 days of pre-trial detention. Notably, Ecuador did not notify the Swedish Embassy in Ecuador of Bini’s arrest, a violation of international protocol. On Saturday, Ecuador’s government claimed that Bini had been charged for “his alleged participation in the crime of assault on the integrity of computer systems.” The only evidence against him was the presence of several electronic devices found in his residence and his having made several trips abroad in recent years.

Bini was arrested not long after Ecuador’s Minister of the Interior María Paula Romohad claimed on Thursday that “Russian hackers” were present in Ecuador and — along with a WikiLeaks member — were seeking to “destabilize” the Moreno-led government and “blackmail” Moreno. Notably, prior to his arrest, Bini had tweetedabout Romo’s claims and likened it to a “witch hunt.” Since his arrest, Bini has been alleged to have been the WikiLeaks member to whom Romo alluded on Thursday. However, Bini — according to a statement from his Ecuadorian lawyer, Carlos Soria — has never worked for or collaborated with WikiLeaks, and is merely a software developer and well-known privacy activist. Yet, Biniis a personal friend of Assange and had visited him in Ecuador’s London embassy on several occasions since 2012. This, along with the fact that the primary evidence against Bini is the large number of electronic devices found in his residence, has led many to suggest that the charges against Bini are political in nature.

In addition to Bini’s pre-trial detention based on nothing more than questionable evidence, an Ecuadorian lawyer and supporter of former Ecuadorian president Rafael Correa, Viviana Paredes, announced on Friday that she had been informed she was the likely object of an investigation by Ecuador’s Interior Ministry triggered by her participation in a 2012 event along with Assange’s mother, Christine Assange, where they — among others — urged the then-Correa-led government to offer Assange asylum. Furthermore, several protesters were arrested in Quito for demonstrating against Moreno’s decision to revoke Assange’s asylum and his corruption scandal.

Two of those detained were forced to publicly apologize to Moreno and sentenced to50 hours of community service. One of the detained protesters later told Ecuadorian journalist Enrique Alcivar that Ecuador had become “a dictatorship” while the other stated that “there is no longer freedom of expression” in the country. Following Paredes’ statement on Friday, notable Ecuadorian politicians, such as former Foreign Minister Ricardo Patiño and legislator Amapola Naranjo, reported acts of intimidation directed against them over the weekend. Patiño announced via Twitterthat a truck without a license plate but belonging to the government’s communication authority had erratically pursued his car as he and his wife were driving from Quito to Quevedo early Saturday night. The day before, Patiño claimed on Ecuadorian radio station EcuadorInmediato that Moreno made the decision to revoke the journalist’s asylum in exchange for loans from the IMF and other U.S.-dominated financial institutions. Ecuador’s Interior Ministry also recently accused Patiño of “conspiring” against Moreno, but has yet to provide evidence to support those claims.

Naranjo, for her part, stated on Twitter Sunday that she had recently received numerous verbal threats and warnings and that she had been the victim of smear campaigns on social media and other media for her vocal opposition to Moreno and his political allies in Ecuador’s legislature.

These alleged efforts to target and intimidate not just Assange supporters in Ecuador but also allies of former President Rafael Correa follow years of similar actions to intimidate Moreno’s critics, an effort that arguably began following the imprisonment of former Vice President Jorge Glas, a Correa ally who was sentenced to six years in prison in 2017 for his alleged role in a corruption scandal involving a Brazilian company. Moreno has used the imprisonment of Glas, who was Moreno’s own vice president at the time, as part of a campaign to portray himself as an “anti-corruption” crusader, an image that has been severely undercut following the revelations of the INA Papers scandal.

Despite having several health conditions, Glas went on a hunger strike last year for several weeks in protest of poor conditions and a lack of access to healthcare. Glas and his family have claimed that the charges against Glas as well as his poor treatment in prison are “political revenge.”

Several months after Glas was sentenced, efforts were made to imprison Rafael Correa himself when an Ecuadorian judge issued a warrant for Correa’s arrest that would have led to Correa’s preventive detention while charges of his alleged involvement in a 2012 kidnapping plot were investigated. Efforts were made by Moreno’s government to extradite Correa from Belgium to Ecuador, but were ultimately unsuccessful. Correa asserted the charges were entirely false and aimed at preventing any sort of political comeback for the former president in Ecuador. More recently, and soon after Assange’s arrest, Correa was again targeted — this time by Facebook — which deleted Correa’s page, which had nearly 1.5 million followers at the time. Facebook claimed in a statement given to El Comercio that Correa’s accounthad violated Facebook policies regarding “the disclosure of personal information such as phone numbers, addresses, bank account data, cards, or any record or data that could compromise the integrity, physical or financial, of the people in our community.”

Correa later claimed that this had been done to his posts regarding the INA Papers scandal involving Moreno’s personal finances since he had highlighted the account number of Moreno’s alleged offshore bank account in Panama. That account is at the center of the scandal and is alleged to have been used in money-laundering and other illegal activities. Past reports published by MintPress and other outlets have noted that Facebook has increasingly coordinated page deletions with groups linked to foreign governments, such as the Atlantic Council and the German Marshall Fund, which both receive funding from the U.S. government.

The creep and leap of authoritarianism

Beyond the recent, troubling moves made by the Moreno-led administration to silence dissent from Correa, Correa’s allies and Assange supporters, Moreno’s decision to revoke Assange’s citizenship and asylum has notably resulted in grave implications for the rights of all of Ecuador’s citizens. Indeed, the move to revoke both Assange’s asylum and Ecuadorian citizenship at the request of the U.S. government sends a clear signal to Ecuadorians everywhere that Lenín Moreno’s government is willing to violate, ignore or revoke their rights if it suits his political ambitions or is requested by his allies, namely the Trump administration.

The further fact that Ecuador allowed its embassy to be used for the violation of Assange’s rights as both asylee and Ecuadorian citizen is particularly chilling and sets a dangerous precedent that could have ramifications for the diplomatic protections ostensibly afforded to Ecuador’s citizens. Indeed, given the years-long effort by the Moreno administration to pursue Correa and his political allies in the country or abroad, the recent violation of Assange’s rights as both political asylee and citizen of Ecuador sends a chilling message to Ecuadorians who are being increasingly targeted for their political views both within Ecuador and abroad.

While Moreno’s efforts to target Correa and Correa supporters were evident from early on in his administration, it is clear that such efforts have picked up speed since Assange’s arrest. Now, Ecuador’s slow creep towards fascism has appeared to turn into a sprint, all with the blessing of the United States government.

0 thoughts on “After Assange’s Arrest, Ecuador’s Creep Towards Authoritarianism Becomes a Sprint”