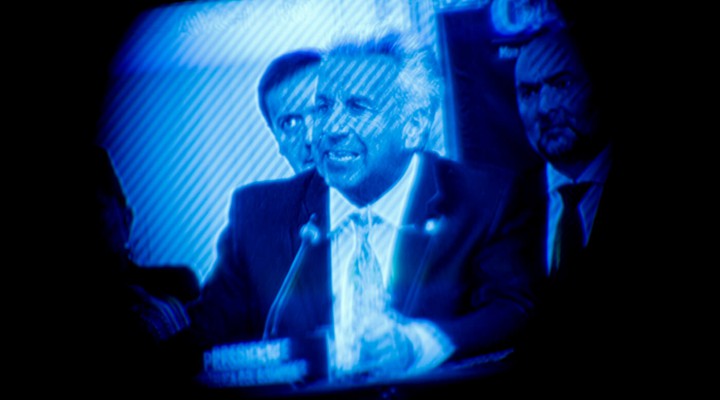 MPN- The truth is at once less and more squalid than the Assange poop story. Ecuador, once among the Latin American “pink tide” nations, since Moreno came into power has been making fast strides towards neoliberalizing its economy. That means cozying up to the U.S.

Now that journalist Julian Assange is in the hands of Western authorities thanks to Ecuadorian President Lenin Moreno, their media lapdogs are scraping from the bottom of the barrel to smear the WikiLeaks editor with increasingly absurd claims.

While Assange is no stranger to smears, this set is particularly distasteful. It started with Ecuadorian Interior Minister Maria Paula Romo, who told reporters on the day of Assange’s arrest that he was “putting feces on the walls of the embassy and other behaviors of that nature.”

What follows is a list of major outlets that have regurgitated the claim, some on multiple occasions: CNN, The Washington Post, The Atlantic, Vox, ABC News, Reuters, The Associated Press, Daily Mail, The Daily Caller, Fox News, NBC News, BBC, The Independent, The Daily Beast, Mediaite, Vice News, the Wall Street Journal and Business Insider.

The Root even concluded its article by re-repeating the smear: “Did I mention that he put feces on the wall? Also, white privilege.”

On Thursday, Moreno was likely emboldened by the lack of critical coverage of the ‘poop smearing’ smear, and so he not only repeated it in Washington to the Inter American Dialogue, but also to the BBC.

#Ecuador president #LeninMoreno tells me ⁦⁦#JulianAssange smeared the walls of the embassy with feces and that is why they revoked his asylum. The #WikiLeaks leader exhausted their tolerance, the president told me ⁦@BBCBreaking⁩ 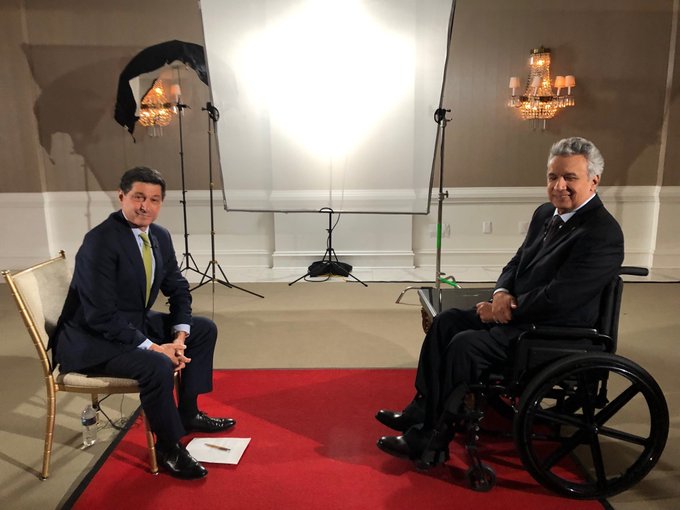 347 people are talking about this

With Moreno’s reinvigoration, and validation, of the lie, it is set to become official record regarding the arrest of Julian Assange. Yet, there is no evidence.

Ecuador made a series of other accusations against Assange too. Apparently, another impetus for the revocation of his asylum was that he scuffed up the walls of the embassy while skateboarding indoors. To bolster this claim, they released surveillance footage of Assange playing around on a skateboard. Yet they, for whatever reason, didn’t find it necessary to release any evidence of Assange smearing his excrement on the walls

Recounting his last meeting with Assange prior to Assange being kicked out of the embassy for being a journalist, reporter Charles Glass wrote of the surveillance of Assange he witnessed:

He made coffee, glancing up at surveillance cameras in the tiny kitchen and every other room in the embassy that recorded his every movement.”

Assange was under total surveillance while in the embassy. They didn’t release the footage of him smearing his poop on the walls because it simply doesn’t exist. It’s a crock of shit.

Even prior to Moreno echoing the claim, Assange’s lawyer, Jennifer Robinson, was asked about it in an interview with Sky News: “A lot of allegations and rumors over the relationship breakdown, including that he spread feces on the walls, I mean — what has it been like for him living there?”

“Ecuador has been making some outrageous allegations to justify what was an unlawful and extraordinary act of allowing British police to come inside an embassy,” Robinson says.

“So it’s not true?” the interviewer asks.

The real reasons Assange was expelled

The poop smear serves an effective propaganda purpose: it deflects from the real scandal. That’s because it’s not just the Ecuadorians giving their supposed side of the story: the crude tale was eaten up by reams of “reporters.” It was put forth as the reason for his expulsion in stories with headlines like “Here’s why Ecuador kicked Assange out of the embassy” and “Why did Ecuador give up Assange after seven years?”

But the truth is far more squalid. Ecuador, once among the Latin American “pink tide” nations, since Moreno came into power has been making fast strides towards neoliberalizing its economy. That means cozying up to the U.S.

As the Wall Street Journal reports, several paragraphs after giving air to the poop smear:

Central to Mr. Moreno’s shift was an interest in deepening ties with the U.S. Mr. Moreno, a 66-year-old who uses a wheelchair since being shot during a robbery two decades ago, ended Ecuador’s alliance with Venezuela and a leftist bloc of nations, choosing instead to pursue a trade deal with Washington.

He has sought to renegotiate Chinese oil-backed loans and signed a bailout package with the International Monetary Fund to shore up a troubled economy.

‘I think it is very unlikely they didn’t talk to the U.S. first’ about ending Mr. Assange’s asylum, said Sebastian Hurtado, president of Profitas, a Quito political-risk consulting firm.

Ecuadorian business leaders hope removing Mr. Assange from the embassy will speed up talks for a trade agreement with Washington.”

After former Ecuadorian President Rafel Correa, who originally granted Assange his asylum, tweeted a picture of a document showing that Moreno’s government was “auditing” Assange’s asylum and his naturalization in Ecuador — which prevents him from being extradited — WikiLeaks (which has never gotten a story wrong) asserted that a bailout for the country from the International Monetary Fund was conditioned on its “handing over Assange and dropping environmental claims against Chevron” for its pollution of the Amazon.

On February 21, Ecuador signed a deal securing the controversial IMF loan for a total of $4.2 billion, in addition to another $6 billion from other U.S.-dominated financial institutions like the World Bank, for a total of $10.2 billion.”

After the IMF deal was struck, Ecuador laid off more than 10,000 public-sector employees, slashed spending, and decreased the minimum wage.

There is also the fact that WikiLeaks republished documents detailing corruption by Moreno, members of his family, and his inner circle.

As The Grayzone reported:

WikiLeaks’s decision to republish the details of Moreno’s use of off-shore bank accounts in Panama, infamously titled INA Papers after the name of the shell corporation at the center of the scandal (INA Investment Corporation), appears to be the main cause for the president’s decision to expel Assange from the embassy.

Ecuadorian Communications Minister Andrés Michelena even went as far as claiming that the INA Papers were a conspiracy plot between Julian Assange, the former president Rafael Correa and the current Venezuelan President Nicolás Maduro.”

While Moreno was in Washington for the Inter American Dialogue, journalist Helena Villar grilled him on the INA Papers and the IMF loan’s role in the forfeiture of Assange to British authorities:

There is some information and also the former president said that there was a link between the decision about Assange and the promotion of the INA Papers and the debt with the IMF. What do you have to say about that?”

“Miss, that is a lie,” Moreno said, drawing laughter from other reporters for using the term “Señorita.” Moreno went on to, ironically, pontificate about the nature of “truth” and “lies”:

We only tell the truth. Sometimes, it’s not so nice, miss. It is not so imaginative or creative as the lie. A lie has different ways to manifest. Novels wouldn’t be so successful, then. Lies are more attractive but we believe in truth. And we think telling the truth is the most important thing.” 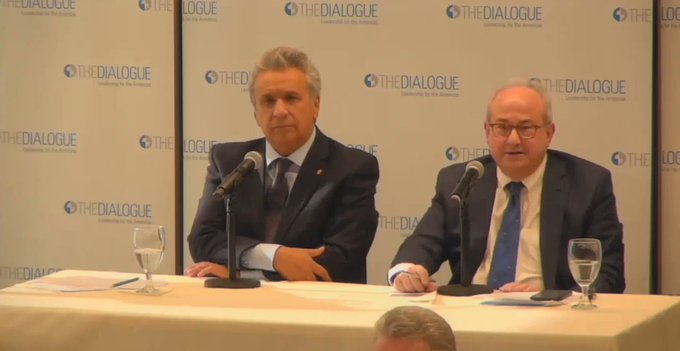 428 people are talking about this

The smear follows an already well-established pattern: the U.S. or one of its allies captures an official enemy, and so, in order to quash any domestic or international support he or she might receive, they lie, make stuff up, and do anything they can to dehumanize their captive.

Journalist and author Max Blumenthal got wise to this tactic years ago. He wrote:

Noriega was accused by the press, trumpeting U.S. authorities, of having “pictures of Adolf Hitler,” “pornography,” “50 kilos of cocaine,” and a “bucket of blood and entrails” that the Americans claimed “may have been used for occult rites.”

The only problem? There were no voodoo rituals, the cocaine was tortilla flour, and the picture of Hitler came from a photojournalism project on World War II history.

It doesn’t stop there. Blumenthal notes other examples of this smear tactic against those no longer able to defend themselves publicly — including Osama Bin Laden allegedly having marijuana, Saddam Hussein’s son having pornography and pictures of George W. Bush’s twin daughters, and Kurdish communist leader Dursun Karatas having caviar and “a large screen television.”

0 thoughts on “The Assange Poop Smear Was Concocted to Cover Ecuador’s $4.2 B IMF Loan”