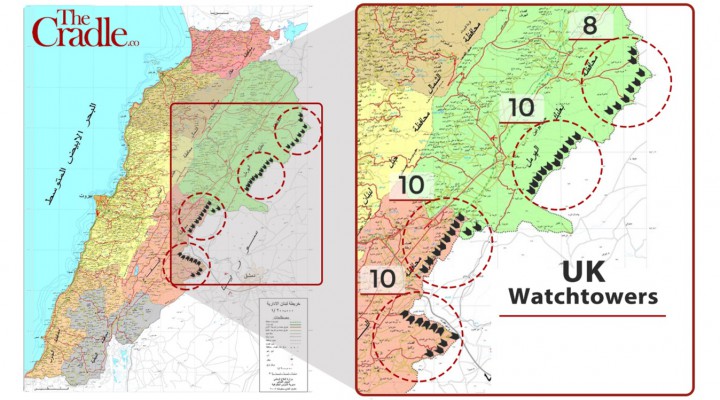 Ostensibly built to monitor ISIS, the UK erected dozens of watchtowers along the Lebanese-Syrian border. But ISIS is long gone, so who are they really watching?

The UK has constructed dozens of sophisticated watchtowers on the Lebanese–Syrian border in recent years. Ostensibly, the initial pretext was that the reason for the construction of these satellite-linked, fortified towers is to monitor the crossing or movement of individuals and vehicles, and therefore deter terrorist Takfiri groups from entering Lebanon from Syria.

Despite these Takfiri groups now dislodged and absent from the Syrian–Lebanese borders, a new unannounced plan seeks to further expand the number of watchtowers. This reveals a different focus, likely on the Lebanese–Hezbollah supply line. Resistance Axis sources believe that the goal of the UK, with US support, is to cover border points to reveal Hezbollah’s supply lines, weapons caches, and movement of individuals across the borders.

A well-placed source from the Axis of the Resistance in Damascus told this author: “The Axis understands the purpose of these watchtowers as well as the interests of the UK and the US in supporting the Lebanese Army without providing it with any weapons that can deter Israel. The focus is never on the borders with Israel but on the Syrian borders to identify and photograph Hezbollah’s supply line.”

The US and several European states countries offer total military support to Israel, despite being fully aware that Tel Aviv’s modus operandi is to create disproportionate bombing and devastation of civilian infrastructure in every war waged in West Asia.

Western control over the Lebanese–Syrian border was and still is an old Israeli objective dating from the 2006 Israeli war. During the 2006 Israeli war on Lebanon, Tel Aviv was taken by surprise when Hezbollah used C-802 anti-ship missiles, the US-made TOW (Tube-launched, Optically-tracked, Wire-guided missiles), and the Russian-made 9M133  Kornet  laser-guided anti-tank missiles. These weapons inflicted severe damage on Israel’s military capability and altered its plans.

Following those 33 days of fighting, Western leaders adopted the United Nations Security Council (UNSC) Resolution 1701 to stop the flow of weapons to Hezbollah and to protect and maintain Israel’s military advantage in future wars. Germany, for instance, was tasked with monitoring the Lebanese coast to inspect ships heading to the harbors of Lebanon, incorrectly assuming this method would prevent
weapon supplies from reaching Hezbollah.

Indeed, the German naval units contacted thousands of ships heading to Lebanon but never inspected a single vessel or captured any arms shipment. Germany has deployed eight ships and 960 sailors of the  Bundeswehr’s naval force to monitor Lebanese waters on behalf of Israel, a deployment that cost Germany over 95 million euros in one year. Over the years and until 2021, Germany has rescaled the number of its naval units and sailors, but continues to spend millions annually on the futile activity of patrolling Lebanese waters.

To many, it has become more than apparent that Hezbollah is not using the Lebanese maritime route for re-supply, and utilizes other itineraries, via Syria, for example. But Israel is clearly not unhappy for Germany to continue spending needlessly on its protection.

Moreover, no country has ever financially contributed to supporting the Lebanese Army in preserving and protecting its borders with Israel or to halting Israeli violations of Lebanese sovereignty. This, despite the fact that the Lebanese Army is banned from the possession of anti-aircraft or anti-ship missiles, that the Syrian state has never invaded a neighboring country, and that its presence in Lebanon was approved by the Arab League to end the 1975–1990 civil war.

Instead, the West approved the presence of the United Nations Interim Force in Lebanon (UNIFIL) on the Lebanese borders to protect Israel and ensure that its violations of Lebanese territory would continue unhindered. The goal of the UNIFIL force since its establishment in 1978 is unquestionably to assist Israel in preventing retaliatory attacks from Lebanon, and not the other way around.

After the 2006 war, Hezbollah upgraded its precision missiles and equipped itself with supersonic anti-ship missiles, cruise missiles, and armed drones, to name but a few. Hezbollah is unruffled by the presence of the British watchtowers, and it is “monitoring the monitors” of its own movements and its cross-border resource line.

When the war on Syria broke out in 2011, the UK, US and France – direct participants in the war alongside Saudi Arabia, Qatar and Turkey – believed that President Bashar Assad would fall within a few months or within a maximum of a year or two. As a pre-emptive measure in anticipation of Assad’s toppling, and as Syria is an essential member of the Resistance Axis and vital to Hezbollah’s supply route, the West began preparations to lay siege on Hezbollah.

In addition, the UK has provided 39 armored Sangars – each providing visibility to a 360-degree, 10km radius – with a view to building a total of 80 towers, similar to the ones used in Northern Ireland. Moreover, 37 bases related to these towers have been established, all linked to each other and to a central command, controlled by a unique satellite communication system. It is no secret that Israel, the UK, and the US have the capability to access satellite communications and other mobile communication systems in the Levant. Furthermore, Lebanon and Israel are part of the United States Central Command (US CENTCOM), where the US military operates closely with the Israeli army and exchanges intelligence information related to Israel’s national security.

The initial purpose of constructing the watchtowers was – it is claimed – to observe, identify, deter, and prevent illegal armed actors and terrorist groups like the Islamic State (ISIS) or al Al-Qaeda (AQ). However, after the defeat of ISIS and AQ, the plan for building more watchtowers has continued, unabated. A source from the Resistance Axis in Damascus says that “the UK plan continues to be operational and active. In this case, with the objective is no longer the Takfiri groups, the target has clearly become the Lebanese resistance group Hezbollah.”

What leads the Resistance Axis to believe it is the target of these British-installed satellite watchtowers? Primarily, it is the fact that the watchtowers plan to cover the traffic leading to the Syrian city of Homs, including Qusayr, Jusiyah, Qara and Nabaq. Moreover, these watchtowers are positioned to monitor Hermel, Ras Baalbek, Labweh, Ras al-Ayn, Arsal, and Tfeil on the Lebanese side.

There are, however, no plans to build watchtowers in the northern Lebanese borders of Wadi Khaled and Akkar, where the actual smuggling of gasoline and hashish traffic registers at its highest level. This area is not used by Hezbollah and is actually considered very hostile to the Syrian government of President Assad.

The Syrian supply route represents the main artery for Hezbollah’s survival and existence. Following any war, belligerents need to re-arm and later modernize and update their weapons to stimulate development, maintain deterrence, and balance the threat. This requires keeping the flow of supplies secured and uninterrupted.

Today, Lebanon is the focus of increased attention and activity in the US and among Israel’s closest European allies. In March 2021, US General Kenneth McKenzie, commander of US CENTCOM, accompanied by officials and officers, the US ambassador to Lebanon Dorothy C. Shea, and the US Defense Attaché, visited a USAID-funded water pumping and solar power station in the Bekaa Valley, on the border with Syria.

“The UK watchtowers are providing what drones cannot provide, and [they] compensate for [Israel’s] blind spots,” says a source from the Resistance Axis. “Also, suppose there are missile bases in the area, and there is a war with Israel. In that case, the watchtowers are well-equipped to visualize military positions – if any – and share information via satellite with Israel, willingly or unwillingly. They are watching Hezbollah, and Hezbollah is keeping a close watch on them,” said the source.

There is little doubt that these towers gather intelligence information, but certainly not against ISIS or AQ. The Lebanese Army is far from being under US–UK control. It is an army that comprises personnel from all walks of life in Lebanese society, including members who are supportive of Hezbollah.

“The day these watchtowers become a critical threat, neutralizing them will not be a difficult task,” the source says.

0 thoughts on “38 British watchtowers span Lebanon’s borders: Who are they really watching?”