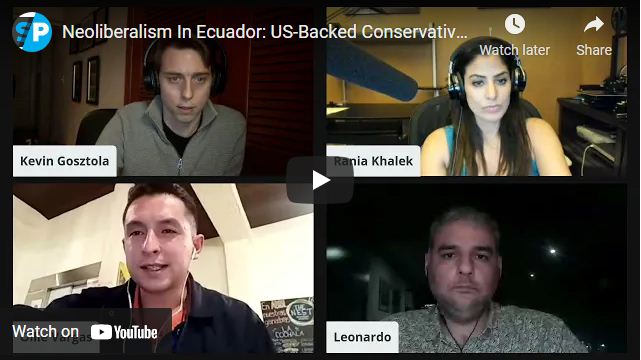 Ollie Vargas, a reporter with Kawsachun News in Bolivia, and Leonardo Flores, the Latin America coordinator for CODEPINK, join the “Unauthorized Disclosure” podcast to discuss the runoff election in Ecuador. Flores was in Ecuador as an election observer.

Guillermo Lasso, a conservative banker supported by the United States and the International Monetary Fund (IMF), beat Andrés Arauz, the left-leaning candidate. It was a bleak development for the left, as this means President Lenin Moreno’s destructive neoliberal policies will continue to wreak havoc on the Ecuador economy.

Ollie describes each of the two candidates, who were in the runoff, and addresses the outcome. Leonardo highlights a poll from a right-wing firm called Cedatos that had some impact on the integrity of the election.

Later in the episode, the two guests discuss the media in Ecuador, which played a role in demonizing Arauz. They describe some of the obstacles the left in Ecuador failed to overcome and confront some of the new personnel in President Joe Biden’s administration, who will count on Lasso to serve US interests.

What’s Next for the Latin American Left?