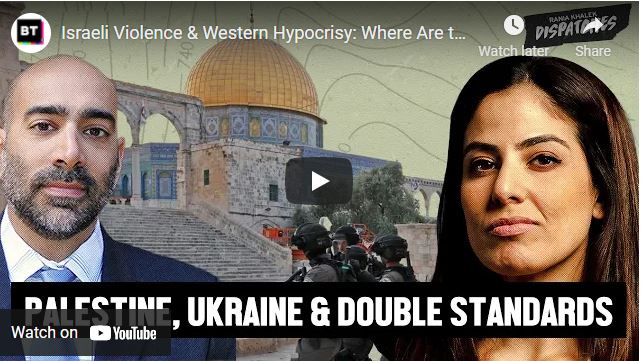 One year after Zionist extremists in Jerusalem provoked a defiant response from Palestinians in occupied Gaza, the same scenario is now repeating. Israelis are attacking Palestinian worshippers at Al Aqsa mosque during Ramadan, executing Palestinians in the occupied West Bank and once again bombing Gaza, but without any of the Western sympathy expressed for Ukrainian victims or condemnation against their aggressors. In fact, the very nations most zealously supporting the Ukrainains are the ones supporting the Israeli oppressors of the Palestinians.

To contextualize the latest Israeli escalation and expose the double standards, Rania Khalek was joined by Ali Abunimah, executive director of the Electronic Intifada and author of “The Battle for Justice in Palestine”.

Ali’s article that was discussed in this episode:
https://electronicintifada.net/content/israel-lobby-group-adl-rehabilitates-hitlers-accomplices-ukraine/35021