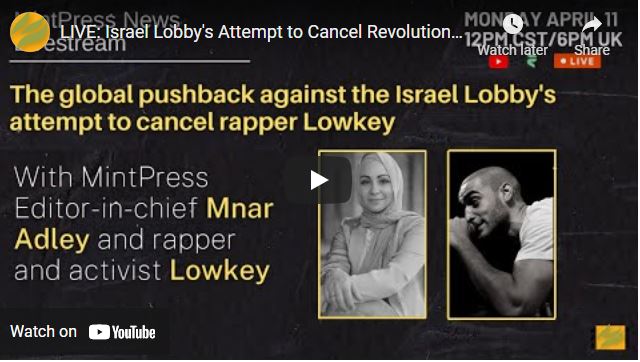 MintCast host Mnar Adley speaks to Lowkey about the extraordinary outpouring of global support he has received, why his activism and relentless campaigning for a free Palestine made him a target, and the growing success of the BDS movement worldwide.

After witnessing the ongoing attack from a coordinated campaign to silence him, tens of thousands of people from around the world have come out in support of hip hop artist, campaigner and host of the MintPress podcast “The Watchdog,” Lowkey. An online petition addressed to music giant Spotify, demanding it refuse to buckle to pressure from the Israel lobby to remove his music from its platform, has garnered over 40,000 signatures from members of the public.

Joining the wave of support have been many of Hollywood’s biggest stars. Actors such as Mark Ruffalo, Michael Malarkey and Liam Cunningham have put their names to it, as have legendary musicians like Pink Floyd’s Roger Waters, Genesis’ Peter Gabriel and rock band Primal Scream.

MintCast host Mnar Adley speaks to Lowkey about the extraordinary outpouring of global support he has received, why his activism and relentless campaigning for a free Palestine made him a target, and the growing success of the Boycott, Divestment and Sanctions movement worldwide.

The British-Iraqi rapper saw the effort to silence him as part of a wider attempt to suppress voices critical of the Israeli government, telling Mnar:

What is being attempted with me is an extension of that which is being practiced essentially as business as usual with Palestinians. It is the exporting of that model of suppression to other places in the world. I am one of the extremely fortunate and lucky people who has a greater level of visibility, which makes it harder for them to take that visibility away.”

Groups such as We Believe in Israel and Act.IL had attempted to present his music, such as the track “Long Live Palestine Part 2,” as antisemitic. For this, they mounted a pressure campaign to have his content, which has reached millions, removed from Spotify. They even managed to get British Prime Minister Boris Johnson to address their concerns in parliament. However, as Lowkey explained, much of this outrage was carefully manufactured, noting that the Act.IL app was set up discreetly by the Israeli government for purposes such as this. As he said:

The aim of the app is to mobilize electronic armies to insert themselves into conversations in what they call a new kind of war… I see this as essentially an extension of the war on freedom of expression against Palestinians within Palestine.”

Between 2015 and 2018, Lowkey claimed, Israeli forces arrested more than 500 Palestinians for posts they made on social media. This included many children. He also described the network of interlocking individuals and groups who come together to exert pressure on politicians, media outlets and musicians to toe a certain line when it comes to the issue of Israel/Palestine.

In recent months, however, their campaigns have been beset by a string of high-profile defeats. In England, Israeli weapons manufacturer Elbit Systems has decided to sell their factory at a loss, after activists from Palestine Action continually occupied it. Meanwhile in Australia, the Israeli Embassy suffered a public-relations nightmare after dozens of acts pulled out of the Sydney Festival in protest of its financial collaboration with the Israeli government.

Lowkey has covered these stories in detail in his podcast series “The Watchdog,” which you can find at MintPress News.

Just as Lowkey was speaking to Mnar about the flailing efforts to get him deplatformed, pro-Israel groups opened up a new line of attack on the National Union of Students (NUS), pressuring them to suppress the growing wave of pro-Palestine activism across the country. A letter signed by a host of former NUS presidents, including three ex-cabinet ministers, expressed their “concern about antisemitic events that have taken place within the NUS.” The only named example they gave was Lowkey, who was scheduled to perform at the annual National Union of Students Conference in Liverpool this year before the Union of Jewish Students (UJS) organized a pressure campaign that caused the NUS to pull the plug.

The letter presents Lowkey as a rabid anti-Jewish racist on the grounds that he claimed that Ukrainian president Volodymyr Zelensky’s Jewish heritage has been exploited by the media in order to shield Western governments from scrutiny of the Nazi groups they are arming and training in Ukraine. Lowkey made those comments on an episode of “The Watchdog” with journalist Asa Winstanley. For a wide range of examples of media doing exactly this, see this MintPress News article from March.

That the letter has little to do with antisemitism and more to do with silencing pro-Palestinian voices can be inferred from its authors, Robert Halfon and Gideon Falter. Halfon is a Conservative MP and former director of the Conservative Friends of Israel group (CFI), who once stated that one of the few things that motivate his politics and worldview is his “unashamed support for the State of Israel, as the only real democracy and progressive force in the Middle East.” He has previously attempted to ban initiatives that tackle Islamophobia in the United Kingdom. The CFI and its directors are major funders of the Conservative Party and use their financial clout to influence policy. In 2012, the chairman of Elbit Systems was caught on tape claiming that his company had “piggybacked” on the CFI to “gain access to particular decision makers.” The CFI pays for politicians to visit Israel, where they often visit Elbit Systems headquarters, according to The Financial Times.

Meanwhile, Falter is vice chairman of the U.K. branch of the Jewish National Fund (JNF), an organization that helps build illegal settlements in Palestine, thereby contributing to the process of ethnic cleansing. Accounts for the JNF U.K. show that it provides money for IDF recruitment programs. Its patrons include the prime minister and president of Israel, as well as two former British prime ministers, Tony Blair and Gordon Brown.

The letter contains a number of incoherences, including the claim that, “[t]he history of systematic antisemitism within the NUS can be traced back decades,” an assertion that would presumably incriminate most if not all of the previous NUS leaders who signed it.

The Union of Jewish Students maintains an extremely close relationship with the government of Israel. Indeed, an Al-Jazeera investigation found that the Israeli Embassy secretly funds the union. Former Israeli Embassy staff also play a key role in the UJS. For instance, current UJS CEO Arieh Miller was head of digital media and Jewish community relations for the Israeli Embassy in London between 2013 and 2015 and later served as the executive director of the Zionist Federation before his UJS appointment.

Others go in the opposite direction. Yair Zivan, for example, left his job as campaign director of the UJS to become a press officer for the Israeli Defense Forces. From there, he took a job as then-President Shimon Peres’s international media coordinator. He is currently a foreign policy advisor and international media spokesperson for Israeli Prime Minister Yair Lapid.

The UJS is currently leading a campaign to have incoming NUS President Shaima Dallali – a Muslim – removed from her post before she even starts it. On Tuesday, they sent a letter to the NUS board of trustees claiming Dallali was antisemitic. This – in combination with the recent Lowkey affair, they claimed – was proof that the NUS trustees need to decisively act and clean up the organization.

The letter, they insisted, was signed by over 500 Jewish students and allies, indicating a supposed groundswell of public support. However, immediately after it was publicized, a host of purported signers publicly stated that they had not signed the list at all and their names had been added without their consent.

“Hi, Union of Jewish Students. How did you allow my signature and several others to be falsified on this letter?” tweeted journalist and historian Barnaby Raine. “Please investigate. This letter supports an IHRA text which denies Palestinians the right to talk freely about their dispossession, so you’ve associated me with racism without my consent,” he added.

Others, such as activist Em Hilton, noted that not only had they not signed the letter, their affiliations were incorrect as well.

The dishonesty with which the letter has apparently been put together speaks volumes about the groups organizing it. Nevertheless, it has been given significant coverage in the British press.

It is evident that, having failed spectacularly to remove Lowkey from Spotify, pro-Israel groups are attempting to find other points of weakness in the system to exploit. The fight goes on.